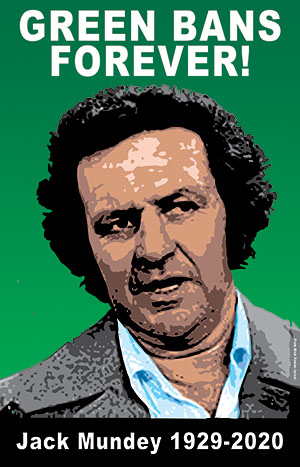 1970s NSW Builders Labourers Federation, with Jack Mundey at the helm, saw trade unions take on a leading role across a range of social and environmental issues instituting Green Ban strike and boycott action across Australia to protect parklands, low-income housing and historical buildings, in support of residents’ groups.  This included protecting Kelly Flat, land across from Carlton housing commission high rise in Melbourne, and stopped a factory being built.

AIDEX military Arms Fare in Canberra is shut down by FOE protestors and allied activists.

1998 FOE joins with the Electrical Trades Union, the Australian Nursing Federation and others to launch the Earthworker alliance, forming a co-operative between green groups and trade unions.

2019 Friends of the Earth is active on most continents around the world campaigning on environmental and social justice issues supporting workers rights as human rights.

Check out Friends of the Earth affiliate Earthworker Cooperative
The Earthworker Cooperative is part of the transition toward new ways of living and working that empower us to take care of each other and the planet.  Our first cooperative in Victoria's coal-power region of the Latrobe Valley, is creating sustainable and healthy livelihoods for the prosperity of present and future generations in the Valley, manufacturing solar hot water technology and offering Red Gum Cleaning Coop services.