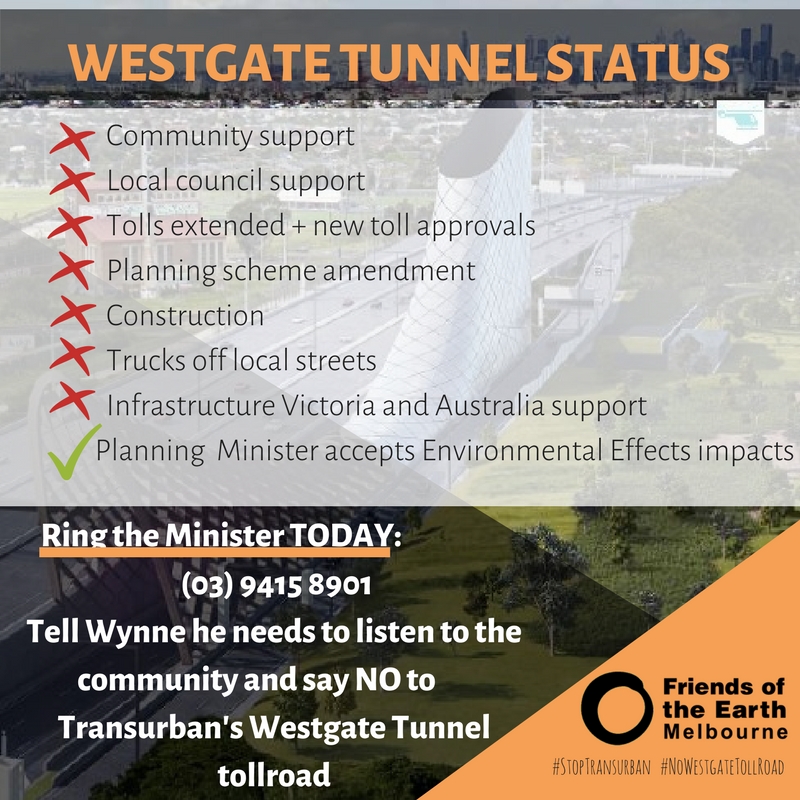 “The community is devastated that the Minister has approved the West Gate Tunnel despite the significant environmental impacts  of this project” Rachel Lynskey, Friends of the Earth Sustainable Cities coordinator said today. “This project will bring 37,000 more cars onto our road network, increasing pollution and traffic in Melbourne. Transurban’s Westgate Tunnel toll road will not keep Melbourne moving.”

Call Richard Wynne now on (03) 9415 8901 and let him know he needs to support the community and say NO to Transurban's Westgate Tunnel tollroad.

Hobson’s Bay Council recently voted to oppose the Westgate Tunnel project, standing up for their constituents concerns about the local area impacts.

In over 500 submissions to the Environmental Effects Statement, the community overwhelmingly found that the Westgate Tunnel proposal had more negative impacts than benefits.

Melbourne continues investment in roads, at the expense of public transport and a world-class rail network.  The community are asking instead that the government invest in freight on rail to reduce pollution from trucks travelling to the Port of Melbourne to provide a quicker and less expensive alternative to the Westgate Tunnel.

The project will be run by Transurban, who already makes $687 million from Melbourne commuters each year. The Westgate Tunnel toll road will force people across the city to pay for this road by extending the CityLink toll for a further 12 years.