The Labor Environment Action Network (LEAN), a group of party members and supporters, called on the "next Albanese government" to '"rely on the best scientific advice when setting targets for emissions reduction and renewable energy generation" and stimulate new, sustainable, well-paying, unionised jobs through climate action & enviro protections’ (@LEAN_Victoria).

The backing of the Victorian Labor rank and file for climate and energy policy to be based on the "best scientific advice" sends a strong signal to the Andrews government in its upcoming decision on Emissions Reduction Targets. 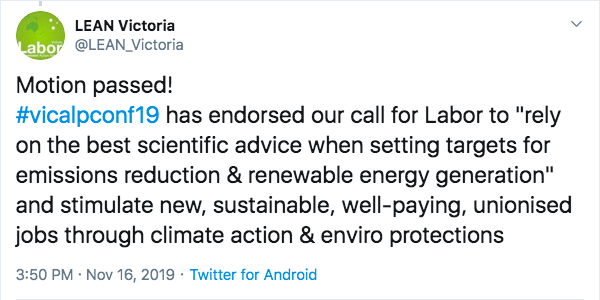 Labor rank and file members are also sending a message that climate change is a problem for Victoria now, not just in the future, tweeting from the conference floor:

‘"Climate change is no longer just about numbers and the future, it’s about protecting the well-being of the Australian people NOW"' (@LEAN_Victoria)

The Andrews government must set the state's first Emissions Reduction Targets for 2025 and 30 by March 31 next year.

Friends of the Earth have been coordinating a community campaign for them to be science-based targets that help keep global warming below 1.5C.

The successful motion comes a week after Premier Dan Andrews rebuked members of the Morrison government for refusing to accept the link between climate change and bushfires in NSW and Queensland. Premier Dan Andrews said the science is "indisputable."

"The decision on Victoria's first Emissions Reduction Targets should be based on the best available science, and that tells us we need to reach zero emissions as fast as possible," said Leigh Ewbank, Friends of the Earth's climate spokesperson.

"Science-based Emissions Reduction Targets from the Andrews government will put Victoria on the map for the jobs-rich offshore wind energy sector."

The Labor rank and file also backed a motion calling for the Andrews government to take actions to develop an offshore wind energy sector.

"Both state and federal governments should see the Star of the South offshore wind farm as an opportunity to build a new sector, secure the future energy needs of the state, and create good sustainable jobs for the Latrobe Valley and Gippsland" said Pat Simons.

"With Energy Australia, Alinta, and AGL all flagging the possibility of early closure of all three of Victoria's coal-fired power plants, the need for a transition plan that creates new opportunities for regions currently dependent on fossil fuels is increasingly urgent."

ACT NOW TO AMPLIFY THE MESSAGE: WEEK OF ACTION 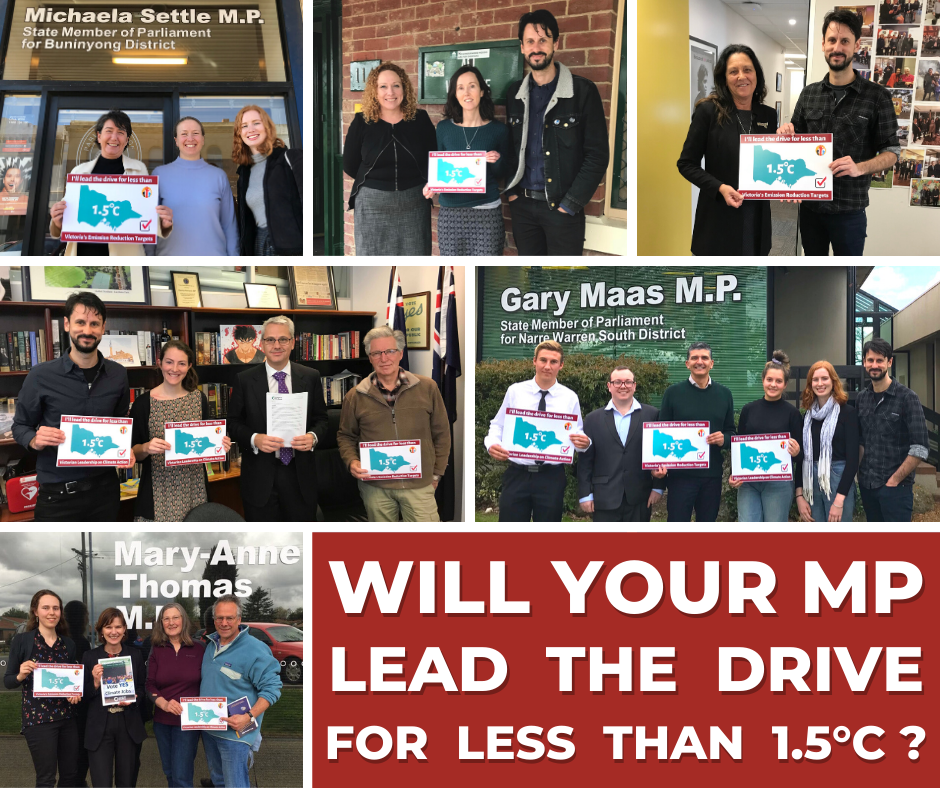 This week, Act on Climate are holding a Week of Action to amplify the message that climate change needs to be a top priority for government here in Victoria.

FoE campaigners and locals have urged over a dozen MPs to lead the drive for keeping warming below 1.5°C, but we need your help to reach the rest of them.

We need you to visit the electorate office of your local Victorian Labor MP to ask them a simple question:

Will they support science-based Emissions Reduction Targets that keep global warming below 1.5°C?

Then we want you to let us know where they stand by grabbing a photo with the MP (or a selfie outside their office) with a 'yes', 'no', or question mark on our campaign placard.

We'll be publishing the photos over our social media channels to build the pressure and encourage the government to base their decision on science, not the demands of the fossil fuel industry. Email pics to [email protected] + [email protected]


We're facing a climate crisis. The polar ice caps are melting, the Great Barrier Reef is bleaching, and Australia is burning. Victoria must show greater leadership on climate while the Morrison government refuses to act.

The actions we take here in Victoria will make a difference.

WEEK OF ACTION UPDATE - EVENTS NEAR YOU:

Friends of the Earth and Environment Victoria supporters are fired up and ready for action...

Please click here for the Facebook event. Find an event near you, invite your family and friends, and get involved. It's time to make the case for Victorian leadership on climate!