Victoria’s Hazelwood power station is the biggest carbon emitter in the national electricity market (NEM) and produces a quarter of Victoria’s electricity. It has long been scheduled for closure.

It has 550 direct employees and 300 contractors.

There is plenty of electricity supply in the NEM and Hazelwood’s closure will help create space for new renewable energy.

If Engie does announce a sale or shut down, the key issue will be what happens to the workers at Hazelwood, and the businesses that rely on them.

Victoria has long relied on the Latrobe Valley to provide the vast majority of our electricity supply. We need to Stand with the Valley during the difficult times to come.

Seven ways to support the transition

We cannot leave this to the market.

Both levels of government and the companies that have made so much profit from burning coal need to fund a profound transformation of the Latrobe Valley economy.

There is no ‘silver bullet’ which will solve the problems of job loss which will happen as power stations start to close. But there are many good ideas which can be enacted now, to create jobs and opportunity in the Valley.

Polling conducted for Friends of the Earth in August showed strong support for the government intervening to help fund transition.

The results showed that 69.5 percent of respondents want the government to invest funds to help diversify the Valley’s economy (including 77.4 percent of ALP voters).

The polling of 1,137 people was conducted by ReachTEL on the evening of August 4.

A range of government policies will be released in coming months, including

It is essential we use the next few months to set expectations high and show the government that the time for coal is over and that we need an urgent transition to energy efficiency and 100% renewable energy.

Here’s some things you can do to help:

1/ Tell us your ideas for economic diversification and transition 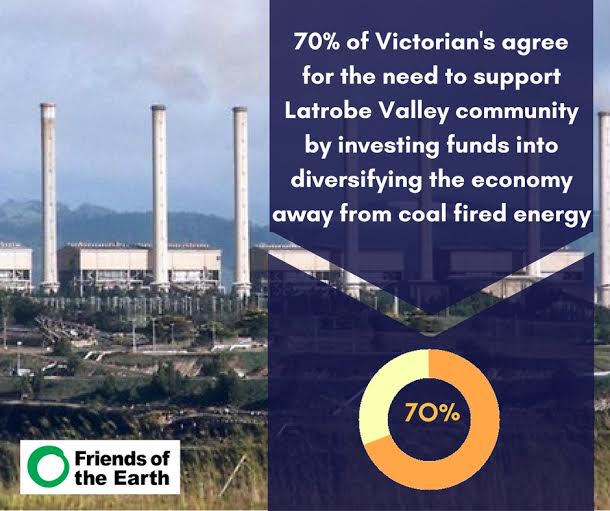 There are many other great ideas in the community for practical transition initiatives.

If you have good ideas, please send them to us. Further information available here.

We need the government to set deep ERTs, especially for the first commitment periods (2020 and 2025). High ERTs will help drive closure of coal fired power stations.

Please sign our petition to the Premier (please note that you will need to insert your preferred ERT into the letter).

3/ Tell the government: No new coal

The government’s draft coal policy, which is due to be released by late 2016,  must rule out any further development of Victoria’s coal reserves. Please email the Resources Minister, Wade Noonan, calling on the government to release a coal policy that bans new coal development, cancels existing coal exploration licenses and allocations, and rules out spending any public money on coal research. [email protected]

Hazelwood is jointly owned by Engie (formerly GDF Suez), with a 72% share, and Mitsui & Co (28% share). Please mention the company on social media and use the hashtag #LVTransition

5/ Spend transition money in the Valley!

The Andrews government allocation of $40m in funding in the 2016 state budget is welcome news for the Valley. However, it has now been announced that some funds will be spent in adjacent Shire areas rather than all in the Valley. Community group Voices of the Valley has made it clear they want all funds spent in the affected communities – those most impacted by closure. We agree. 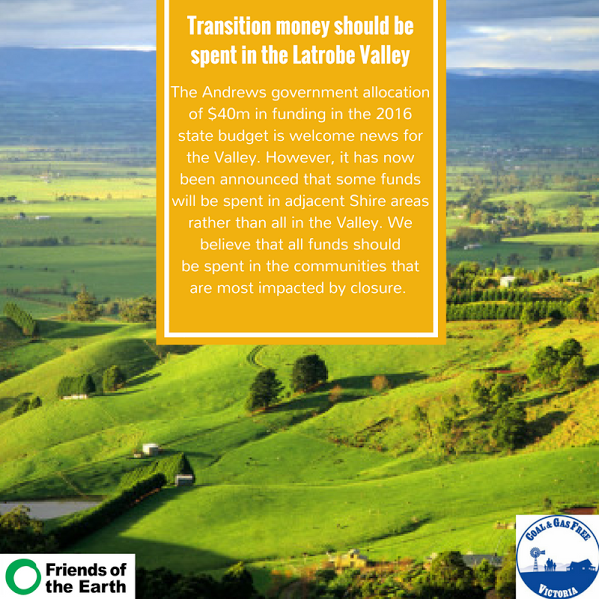 It is essential that the federal government at least match the commitments by the state government (who have already put $40 million into transition initiatives). Possible tweet or facebook post:

Please sign our petition to the federal Environment Minister Josh Frydenberg and Engie, urging them to help fund the transition.

7/ Stand with the Valley

Take a #StandWithTheValley selfie and post to social media to show you support funding a transition plan in the Latrobe Valley (remember to tag @FoEAustralia on Twitter). You can also use the #LVTransition hashtag. 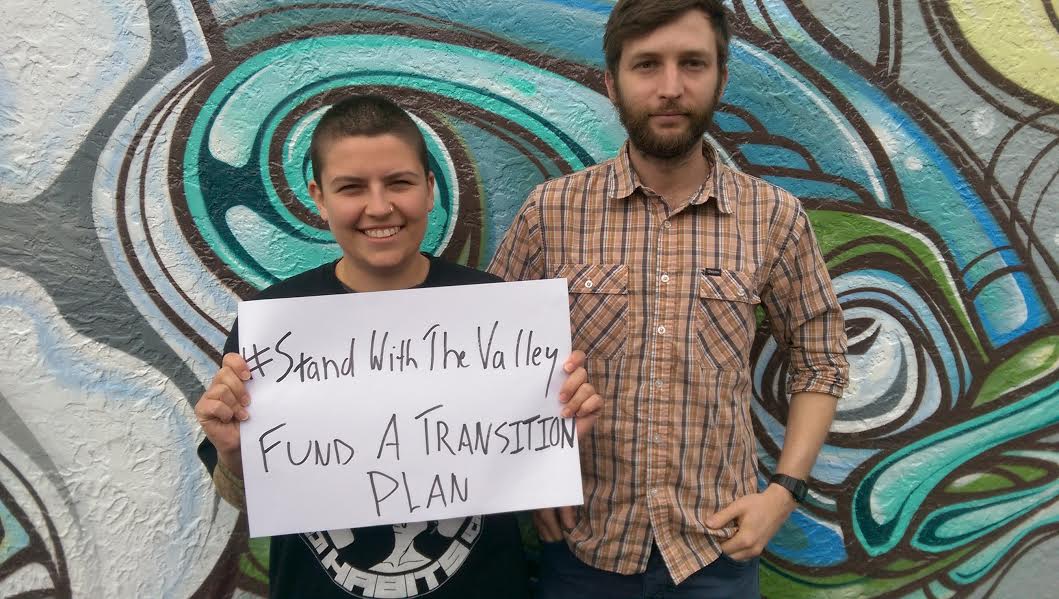 ...and one more - Become a member of Friends of the Earth!

We truly run on the smell of an oily rag  - and with your help we can get more done. You can sign up as an Active Friend monthly contributor from as little as $10 per week here.