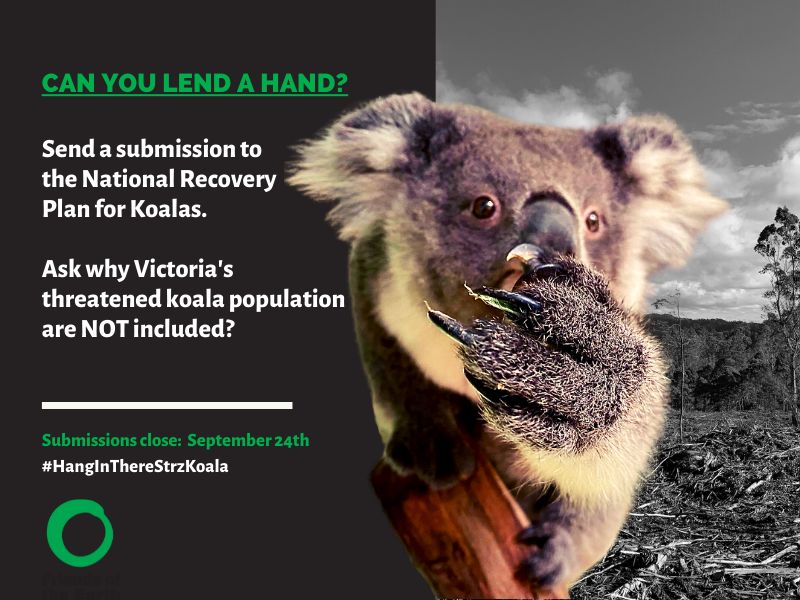 Koalas across Australia continue to face a myriad of threats.

The Federal Government is asking members of the public to comment on a Draft National Recovery Plan (combined populations of Queensland, New South Wales and the Australian Capital Territory) until Friday September 24th.

Koalas in those jurisdictions have been listed as threatened under the Federal EPBC Act since 2012. Koalas in Victoria and South Australia have not been listed and are not covered by the Recovery Plan, however the Environment Minister also encourages submissions relating to the southern "unlisted" koala populations (VIC & SA).

Friends of the Earth Melbourne has campaigned for a number of years seeking an EPBC listing for the only ‘genetically robust’ endemic koala population remaining in Victoria and South Australia. A small population, perhaps as low as 2,000 koalas has somehow survived in the Strzelecki Ranges and South Gippsland region of Victoria. In our soon to be published annual SKAT report our survey-findings have revealed that the koala population east of the Strzelecki’s - Holey Plains State Park, Mullungdung and Wonwron State Forests covering an area of 30,000ha could contain as few as 200 koalas.

The Strzelecki/South Gippsland koala faces threats of climate change including increased risk of bushfires and freak storm events, logging in plantations and native forests and new developments that include vegetation clearing are some of the biggest threats facing this relatively tiny but genetically significant population.

We urge you to send in a submission to ask for a recovery plan for the Strzelecki/South Gippsland koala. The long term future of the animal in this state could hinge on the survival of this endemic koala sub-population.