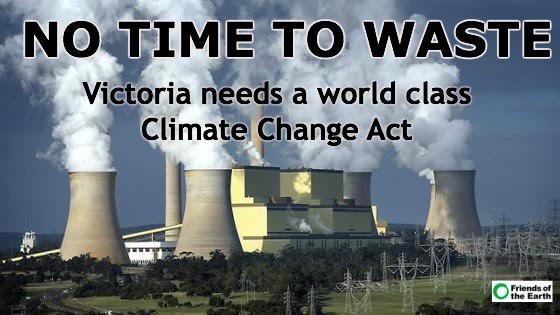 When they were in power, the Victorian Coalition gutted the Climate Change Act. Victoria has been without effective climate laws or policies for five years. In that time, the global climate crisis has worsened, Victoria’s emissions have not fallen, the development of renewable energy was halted for almost five years, and the state is behind where we should be in adaptation planning. Globally, we are about to cross  the threshold point of 400 ppm of carbon dioxide in the atmosphere.

The government has recently been handed the Independent Review to the Climate Change Act, which makes 33 recommendations about how the Act could be re-built. Most of them are common sense improvements.

It will respond to the review shortly. The government’s response will outline how it intends to re-build the Climate Change Act.

A recent independent review of the state’s Environment Protection Agency recommends that the EPA be given more powers to be able to regulate CO2. A strong Act will allow this to happen.

What is lacking in the Review is a sense of urgency. The report proposes timeframes that would not deliver a Climate Change Strategy or departmental Low Carbon Growth Plans until 2020. Adaptation plans are not due until 2021.

These timeframes are unacceptably slow. They certainly do not align with the messages of urgency contained in the foreword to the Independent Review - “there has never been a more urgent time for strong, decisive action”. The process put forward in the Review must be fast-tracked. This could be achieved through the release of an interim Climate Change Strategy in 2016, which would outline the measures that the Andrews Government commits to take this year (including through its Renewable Energy Action Plan, Energy Efficiency and Productivity Strategy, and Review of the EPA) towards a nominated 2020 emissions reduction target.

It is essential that the Act become the mechanism that will drive an orderly closure of coal fired power production in Victoria. This is the best chance the Victorian community will have to start the required transition. We must get it right.

Please write to the Premier and urge him to act decisively and rebuild the state’s ability to reduce greenhouse pollution at the scale that is required if we are to avoid dangerous climate change.

If you're short for time, please sign our petition and we will make sure it gets to the Premier.

Please cut and paste this letter, make whatever edits/ additions/ extra details you want and send to the premier.

Make sure you include your name and contact details.

I welcome the release of the Independent Review of the Climate Change Act. The review - and government response - is a critical opportunity for the Andrews government to re-establish Victoria as a leader on climate action.

The Climate Change Authority makes it clear that deep emissions reductions will be required in the short term if the global community is to have a hope of holding overall warming to less than 2°C, and the recent Paris Climate Change Agreement shows consensus that limiting warming to 1.5°C is a much safer limit. With the current slow pace of action, it is clear that the global community will miss the 1.5oC target, unless we take dramatic action now. The window of opportunity to act is rapidly closing and, as the framework legislation guiding Victoria’s response to climate change, an amended Climate Change Act must ensure that Victoria’s emissions start falling urgently.

Victoria has an enormous opportunity to embrace a cleaner, healthier future with widespread social, environmental and economic benefits through its climate policy, but leadership cannot come about through delay.

In responding to the Independent Review Committee’s report, I would like to highlight the four key pillars that I believe needs to be enshrined in the amended Act.

1/ Legislated short-term and long-term emission reduction targets which are based on what climate science tells us is necessary, not political expediency

2/ A Climate Charter, including a climate test, applying to all government decisions

Any plan to reduce Victoria’s emissions must address the 50,000,000 tonnes of CO₂ produced by coal power stations each year. To that end, I support the elements of Recommendations 25 and 26 of the IRC report that would give the EPA the power to regulate CO₂ emissions and to put limits on those emissions. The Act should require emissions intensity standards to be set for existing coal-fired power stations, and those standards should tighten over time to ensure Victoria meets its emissions reduction targets.

Ensuring the transition away from coal will require substantial allocations in the state budgets of 2016/17 and 2017/18. I urge your government to continue it’s excellent response to the Hazelwood fires and start meaningful planning for the required transition.

Your response to the Independent Review report will set the course for the government’s legacy on climate change. Having been elected with a promise of making Victoria a leader on climate change, I look forward to the Andrews government now delivering.

Minister for Environment and Climate Change

Other things you can do

Feel free to be creative and if possible use the hashtag: #VicClimateAct or use the image.

Just type in their names (Daniel Andrews, James Merlino, Tim Pallas) to tag them and say something like:

I support a strong Climate Change Act. It needs a strong framework that will drive real emissions reductions from coal, with legislated short-term and long-term targets, and a Climate Charter.