Snow Gums face a massive threat from the spread of dieback which is caused by a native beetle – and super charged by climate change, and localised collapse of snow gum woodlands due to more frequent fires.

Please join our citizen science project to map the extent of this loss. 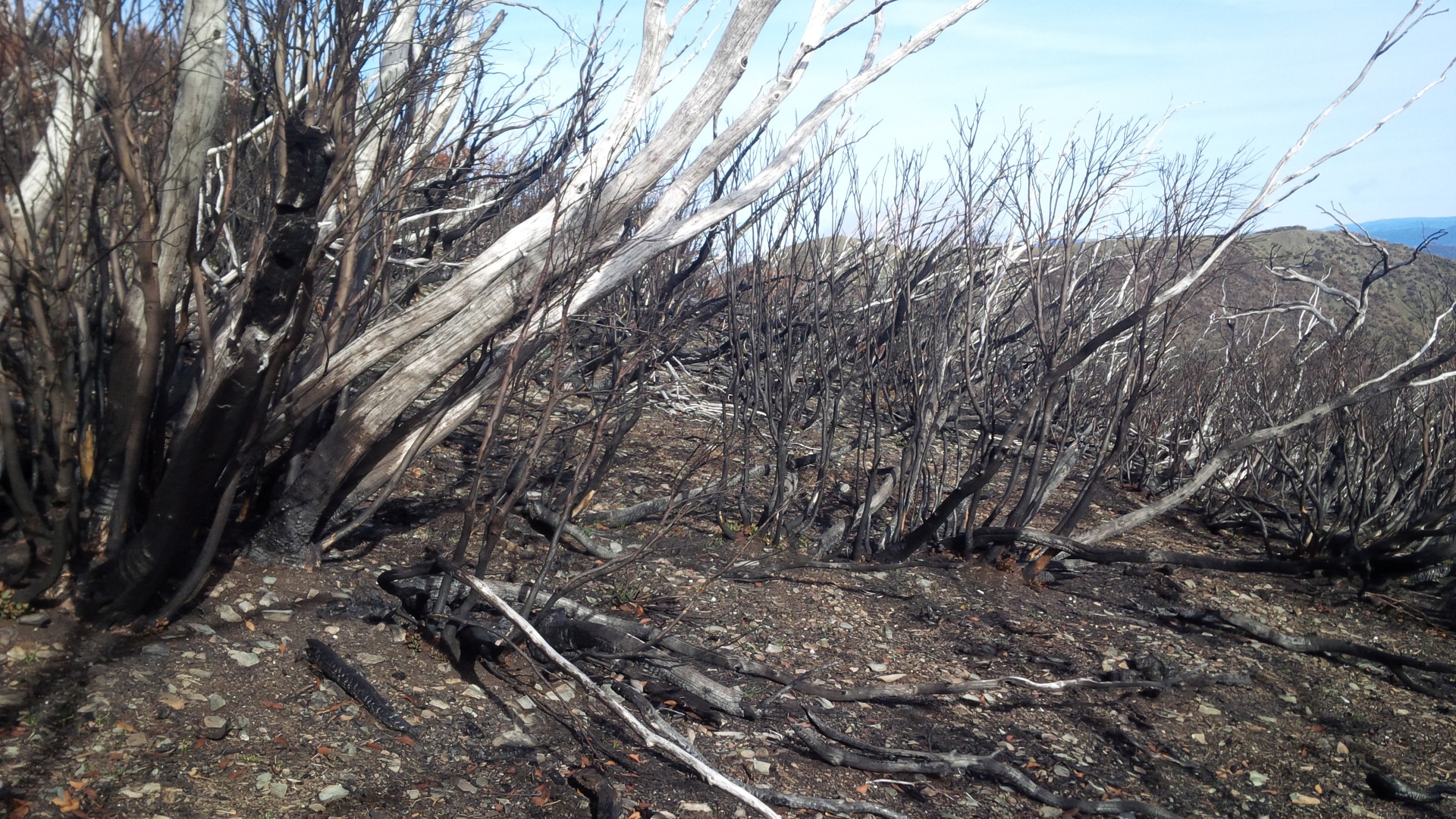 Friends of the Earth recently released a report called An Icon at Risk: current and emerging threats to the Victorian Alps (available here), which points out that climate driven fires are starting to lead to localised collapse of Snow Gum woodlands where regular fires have caused death of parent trees and seedlings.

These forests are fire adapted and can recover from fire. But the dilemma we face is that , since the turn of the 21st century, fires are becoming more frequent and pushing this vegetation community towards ecological collapse.

No one knows the scale of this problem.

That’s where you come in.

We are hoping that, while you’re having an adventure in the Alps, you will start to track where you spot localised loss of Snow Gums – where trees are being replaced by grass or shrubs, with no regrowth from parent trees or seedlings.

We are aware of locations on the Dargo High Plains, Bogong High Plains, near Mt Tabletop and elsewhere where there is localised collapse of Snow Gum communities.

We hope you can add to the knowledge base by sending in your observations:

We will aim to map this and use it in our efforts to encourage the state government to carry out an assessment of the scale of threats to Snow Gum communities (please help us to get this on the government’s radar by signing this letter).

You can email the details: [email protected]

Add the details to this facebook page, which has been set up for the project.

[IMAGE: this old Snow Gum, in a forest of younger trees, is a reminder that this species can cope with fire. The problem we are facing is the increased frequency of fire].

We are also hosting a 4 day citizen science event in the Mt Hotham area over summer to map areas of localised loss of these forests.

You would be welcome to join us.

We are planning to be in the Mt Hotham area from Thursday January 27 until Sunday January 30.

Each day we will go out in small groups to map localised Snow Gum loss.

We will be camping together and there is also an option to stay in a ski lodge at Mt Hotham (for $40 a person per night).

You would need to come self sufficient in terms of food, water, camping gear, and be of reasonable fitness if you want to join the fieldtrips. There is no cost for attending and participants would be covered by FoE’s Public Liability Insurance.

If you’re interested in finding out more, please get in touch: [email protected]

Dieback of snow gums caused by native Phoracantha beetles is spreading across the Victorian Alps. Previously this has been a problem primarily in the Snowy Mountains, but it is becoming increasingly prevalent in the Victorian high country. Although the beetle is native, climate change appears to be playing a role in the spread of the dieback.

There is already a project to track loss of Snow Gums due to  dieback. Our project focuses on loss due to repeat fire.

If you see death of individual Snow Gum trees due to dieback, please report it here. 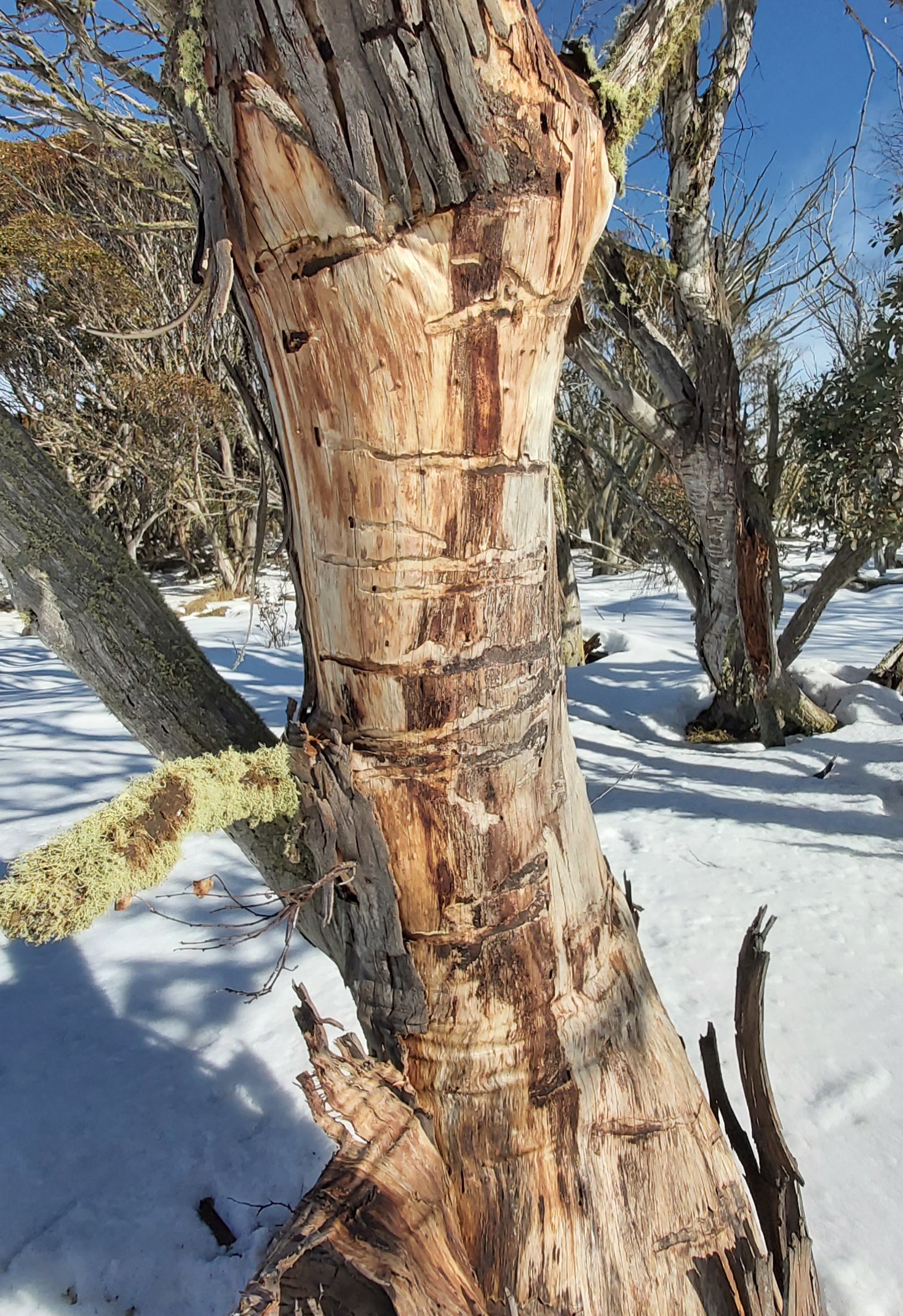 [Above: Dieback is easy to spot and is caused by a beetle. It is different to fire killed trees, although individual burnt trees may also be affected by dieback].

Read An Icon Under Threat.

Please sign our petition calling on the state government to take action to protect these forests.

Make a donation to help us print and distribute the report to key decision makers.

Note that Snow Gum dieback is a different (but equally concerning) issue. To find out more and report dieback, please check this website. This is best done while at the site of dieback as the app can find your location and automatically log it. You then upload an image.

Background – why do we need this research?

Snow gums are the classic alpine tree of the mainland, generally growing at heights between 1,300 and 1,800 metres asl. But wildfire has been devastating large swathes of snow gum habitat, with significant fires in the Victorian High Country in 1998, 2002/3, 2006/7, 2013 and 2019/20. Much of Kosciuszko National Park was burnt in 2003 and 2019/20. South Eastern Australia suffered from a drought that lasted more than a decade and this has increased the severity of the fires that have occurred since the turn of the 21st century. It is estimated that the 2019-2020 bushfires impacted 462 km2 (33%) of mapped snow gum forest that regularly has seasonal snowpack.

After fire, the parent tree is often killed back to ground level, with subsequent re-shooting of leaves from epicormic shoots or lignotuber. In this way, individual trees can exist through various ‘lives’, often surviving multiple fires. However, more frequent fires is causing more death of trees.

‘We found that the lignotuber continued to re-sprout very well after one fire, but after two and three fires, the number of new sprouts significantly declined. The level of whole-tree death (that is, the stems and lignotuber dying) was fairly low following one and even two, fires; however, after three successive fires, on average half of all trees in our plots were dead. In some plots, this figure was as high as 80 per cent of all trees’. (source).

It is possible that repeated fire will lead to the localised loss of snow gum forest and woodland. They could convert to shrubby wastelands, possibly dominated by wattles. There are already areas across the Alps where the forests are starting to transition from Snow Gums to something else.

Are snow gums going to be lost to climate change?

The Victorian government is now so concerned about the threat of fire on Alpine Ash – another mountain tree species – that it has launched a seeding program to help the species survive.

As yet the government does not see the need to intervene in the same way with Snow Gums.

Who is tracking this issue? Who would make the call to intervene?

Research shows that to protect these forests, we need to reduce the frequency and intensity of fires in these communities.

To keep fire out of these systems, we need additional resources for ground and air fire fighting:

Having extra resources means we can protect these forests from fire rather than having to focus on towns and other human assets during bad fire seasons.

Sadly, Snow Gums are also at risk from dieback, which is caused by a native beetle, but which appears to be made worse by the warming being driven by climate change.

Some examples of local collapse 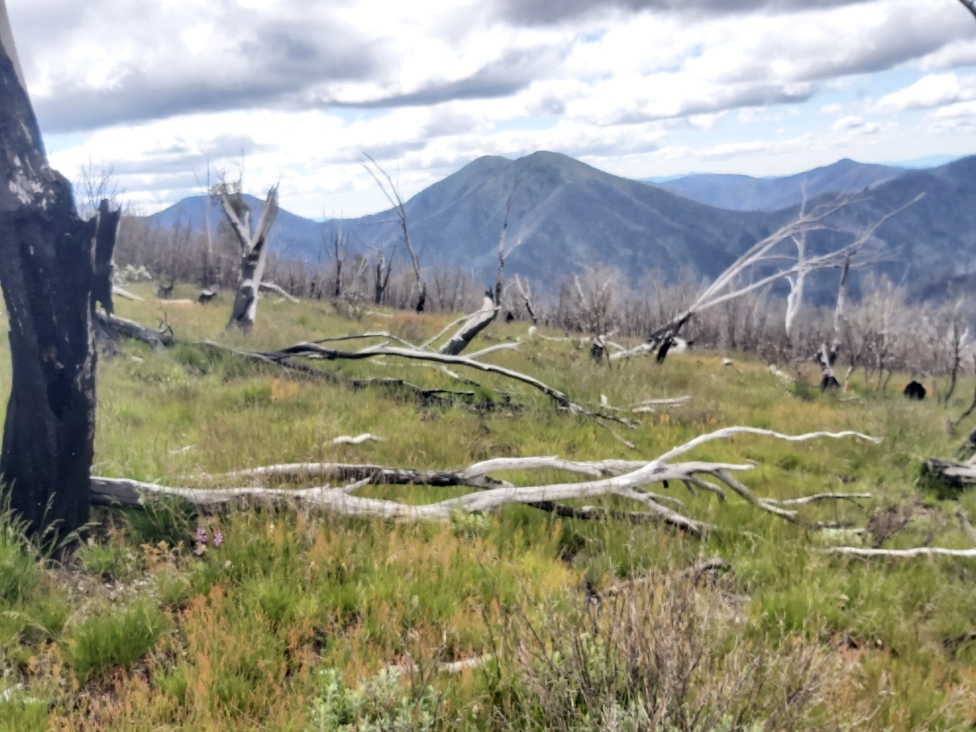 The forest above, located off the Dargo High Plains road, has been burnt several times and exhibits a profound loss of Snow Gum trees. It is now dominated by low shrubs and grasses. 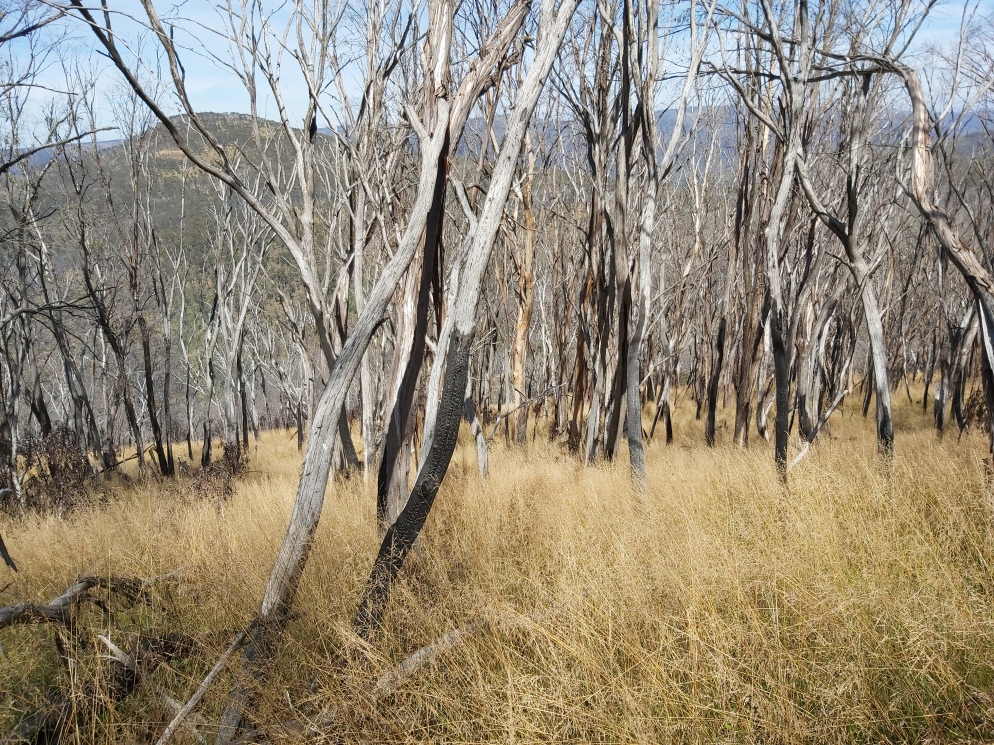 This slope pictured above, just south of JB Plain in the Alpine National Park was burnt in 2019/20. The fire burnt hot up a hill and is now dominated by grass. Some understory species are returning, however there is no obvious seedling or lignotuber growth by Snow Gums. 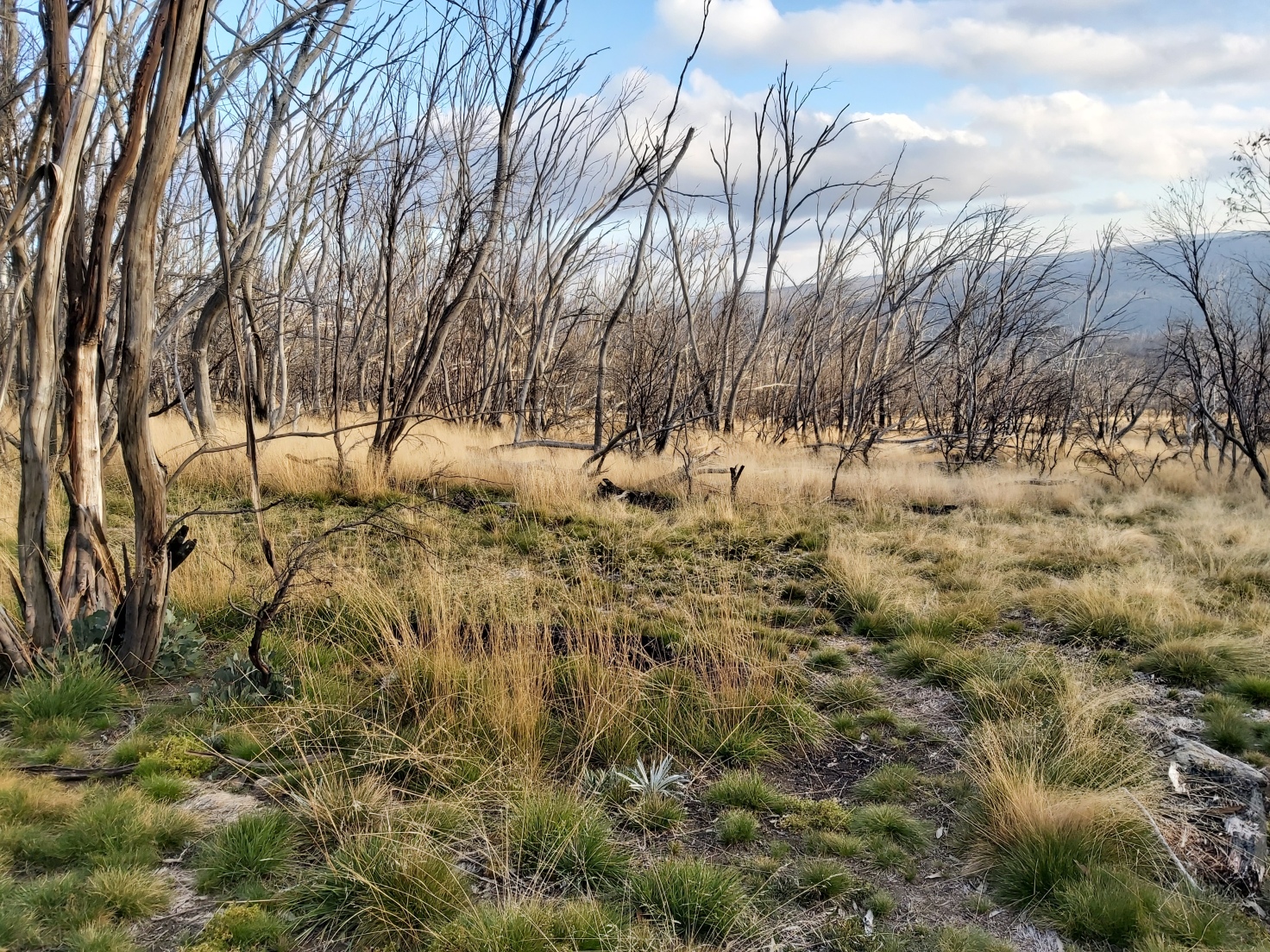 Above: localised loss of Snow Gums near Raspberry Hill, southern side of Bogong High Plains, VIC (there is some patchy lignotuber regrowth, as shown by the tree on the left of the image).

Above: a fire burnt hot up this slope in early 2020. While it was patchy (there are many areas where parent trees survived and there is epicormic regrowth) there are localised areas where no recovery is evident. Near Carmichaels Falls, VIC. Living trees in the background indicate where the fire slowed down as it reached flatter ground. 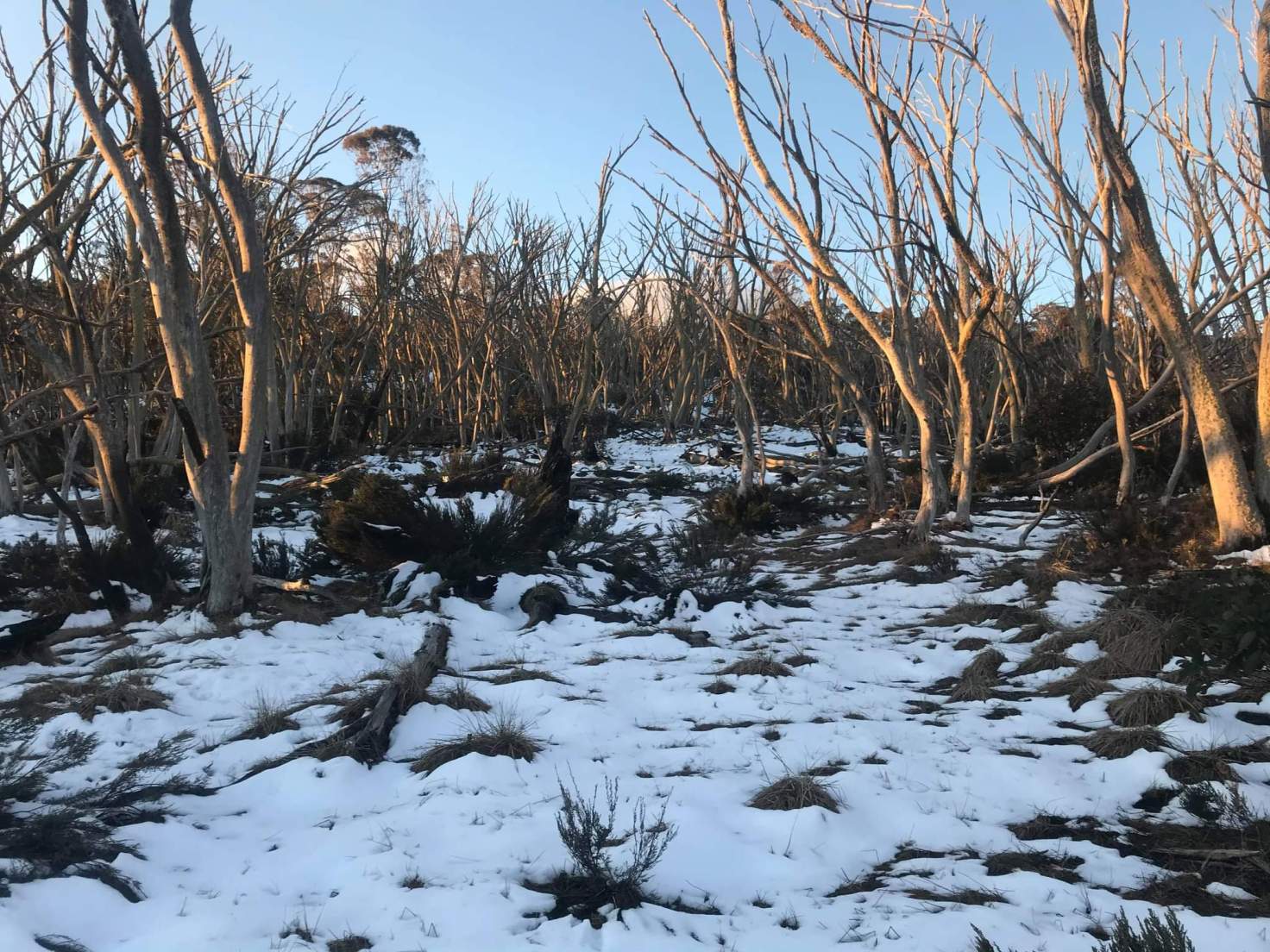 Above: this area is adjacent to the Boiler Plain Reference Area, just south of Paw Paw Plain, within the Alpine National Park. It was burnt in January 2020. Site visits in March 2021 identified significant areas with no seedlings or epicormic regrowth. Image: Stephen Curtain, winter 2021. 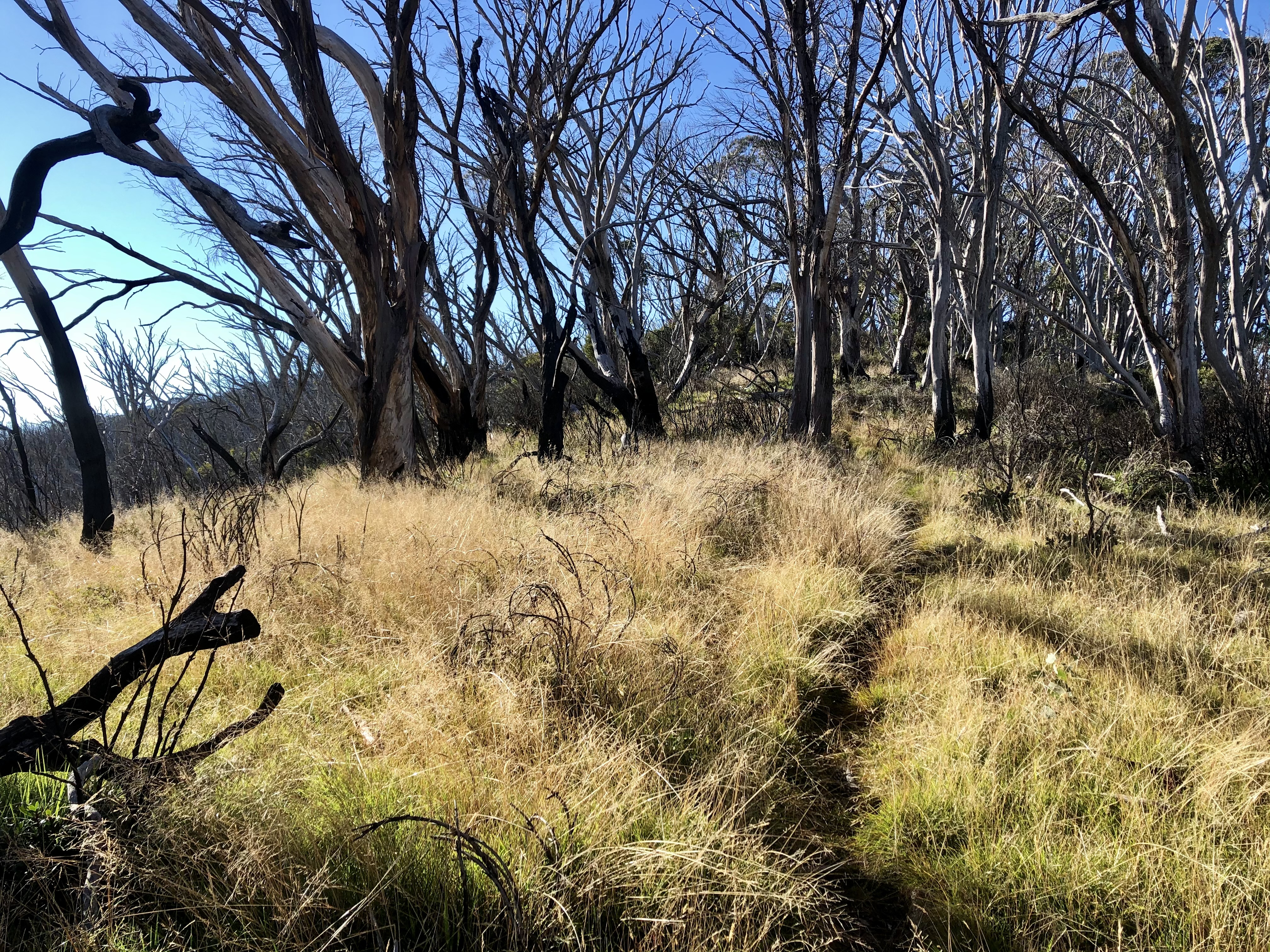 Above: This is 'The Long Spur AAWT between Mt Bogong & Mt Wills. To be more specific it’s approx 3km from Bossiaea Hill heading east toward Mulhauser Spur. The collapse is mainly to north of the track'. Photo Alicia Crossley. 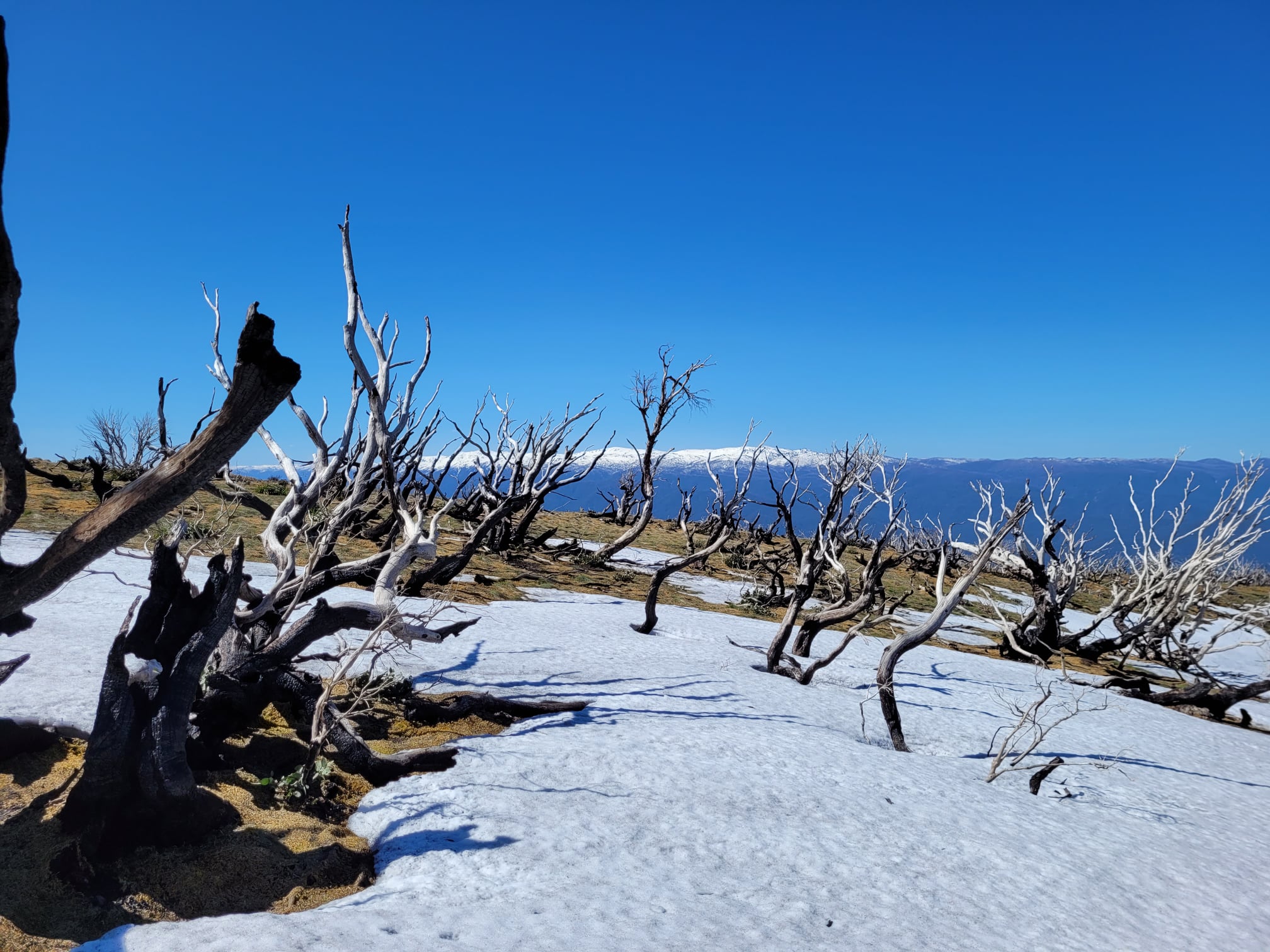 Above: Mt Pinnibar (1,772 metres asl) is a lovely mountain in the far north east of Victoria, up above the Tom Groggin station in the Upper Murray Valley. On a clear day it has spectacular views of the Main Range of the Snowy Mountains.

Sadly it has also been devastated by bushfire. Most recently it was hit by fire during the horror summer of 2019/20. Image: Trevor Staats. 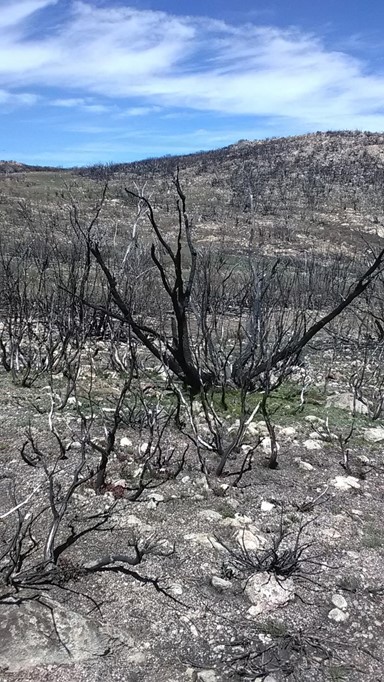 Above: Wellington High Plains. "I first went there around 1970 when my brother took me up the Wellington River to Tarli Karng and out through the Wellington High Plains, pristine snow gum country with open grassy areas full of wildflowers. I then hiked throughout the area mid 70's, words can't describe how I now feel looking at the pictures of it now. It was burnt out in summer fires of 1998, 2006-7 and 2019." 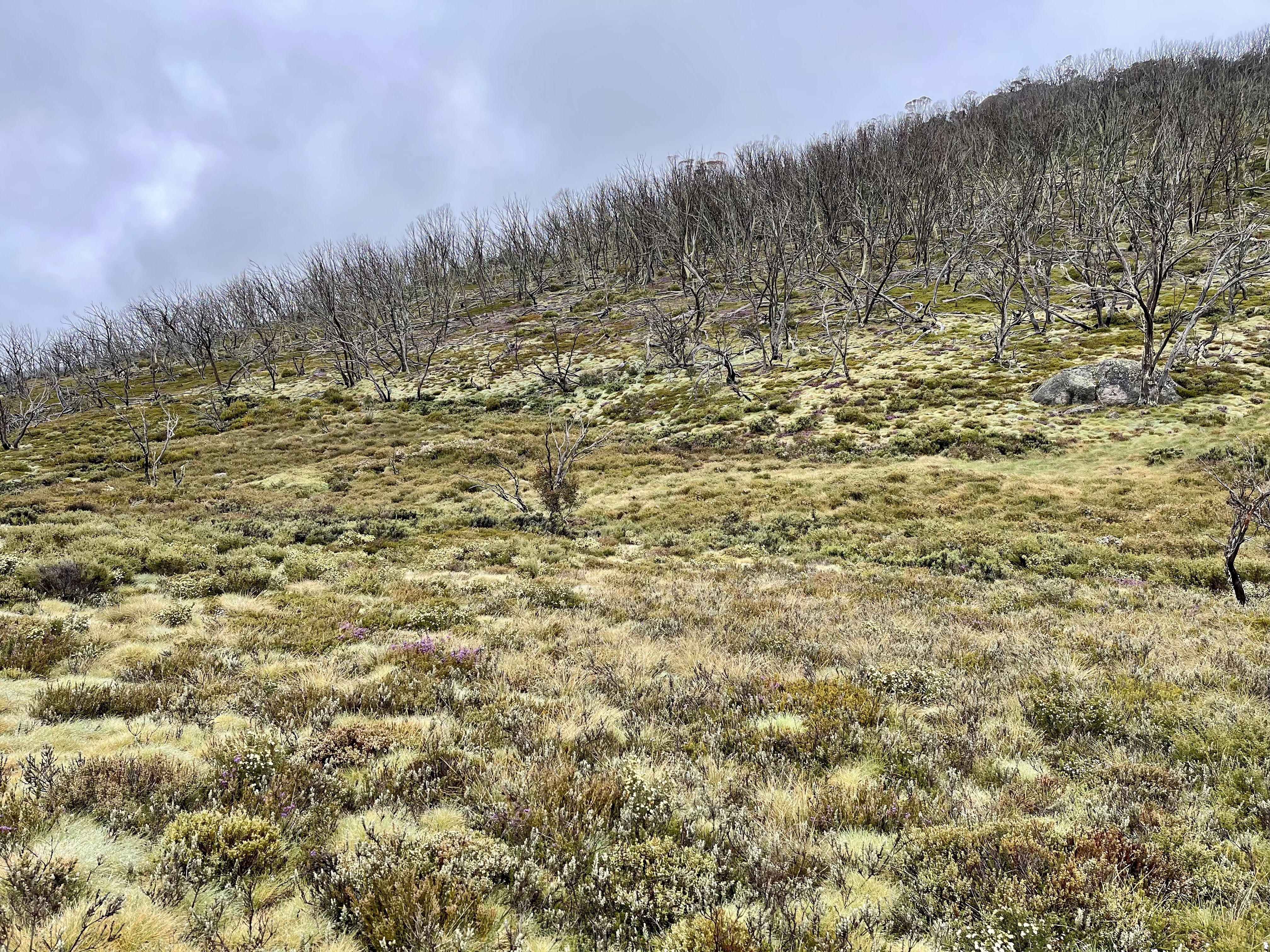