Seaspray, the story so far

Residents of Seaspray are nervously awaiting a decision by the Minister for Resources and Energy, Russell Northe. Mr Northe needs to decide whether to approve an application from Lakes Oil to carry out horizontal drilling.

The community steadfastly opposes the proposal, and is currently preparing for the likelihood of having to carry out peaceful direct action in coming weeks.

Please scroll down to read regular updates on the campaign at Seaspray.

And check here for other ideas on getting your message across that the Minister should refuse the oil and gas drilling that is proposed by Lakes Oil.

Please join us at state Parliament on Thursday May 29 to show your support. Details here.

The small rural community of Seaspray is situated towards the southern end of the Ninety Mile Beach, 32 kilometers south of the large inland town of Sale in Gippsland.

With a population of approx 300, it is a popular tourist destination renowned for it’s pristine beach ,surfing, fishing and swimming in  Merrimans Creek. Seaspray is also a thriving sheep, cattle and dairy farming community home to the state’s largest vegetable  grower.

In May 2013, under the cover of darkness Lakes Oil delivered letters to local residents stating they would be de-watering and flaring off one of their wells the following morning. This is what they call open, transparent community consultation. The well, Wombat 1 is situated just 100 metres from Merrimans creek, that supplies drinking water to Seaspray and is used for irrigation by local farmers. 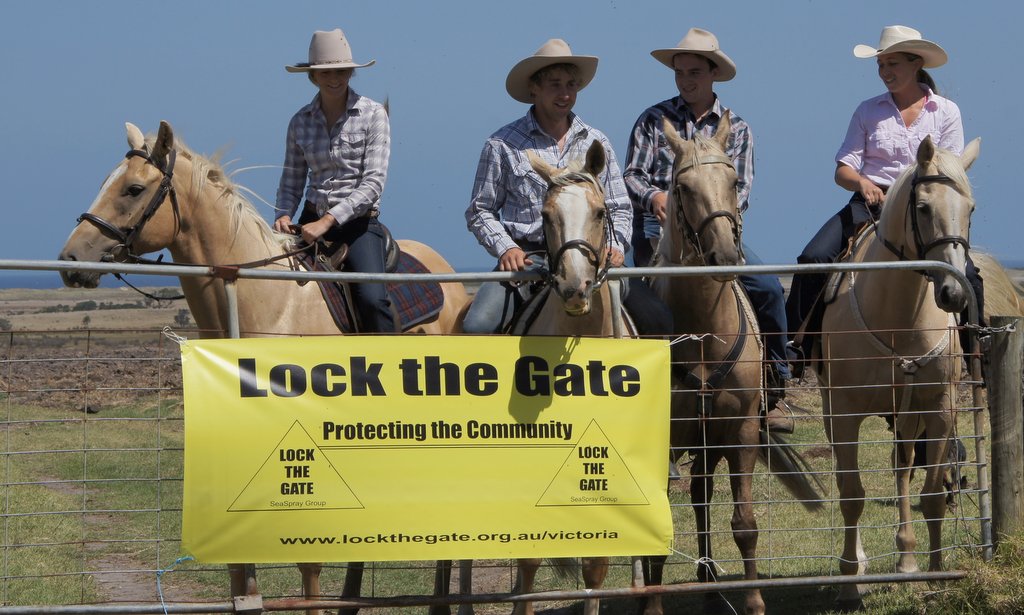 The well was flared off for 10 days, causing massive noise pollution, the school children at the Seaspray Primary School less than 1 kilometre away thought it sounded like a plane was going to crash over their heads and as a result the parents at the school sent a joint letter to the Premier and Health Minister to voice their concerns. They did not recieve a reply.

We have still not learnt what happened to the water removed from this well, that has been fracked in the past and could contain fracking fluid. Several of Lakes Oil’s well sites have been visited by locals and have found to be in a state of total neglect, waste water storage ponds lined with builders plastic that are torn and in disrepair and old well heads capped with concrete.

In May we  began a " door to door" survey conducted in Seaspray, Giffard, Glomar Beach & The Honeysuckles asking one question ‘Do you want to declare Seaspray Gasfield Free? An overwhelming 98% said ‘Yes’

The community had spoken, there was no social license for this invasive industry to operate here. In July 2013 we declared ourselves ‘Gasfield Free’ by creating a huge human sign on Seaspray beach reading ‘NO GASFIELDS, over 650 people from the local area & right across Gippsland came to support us. 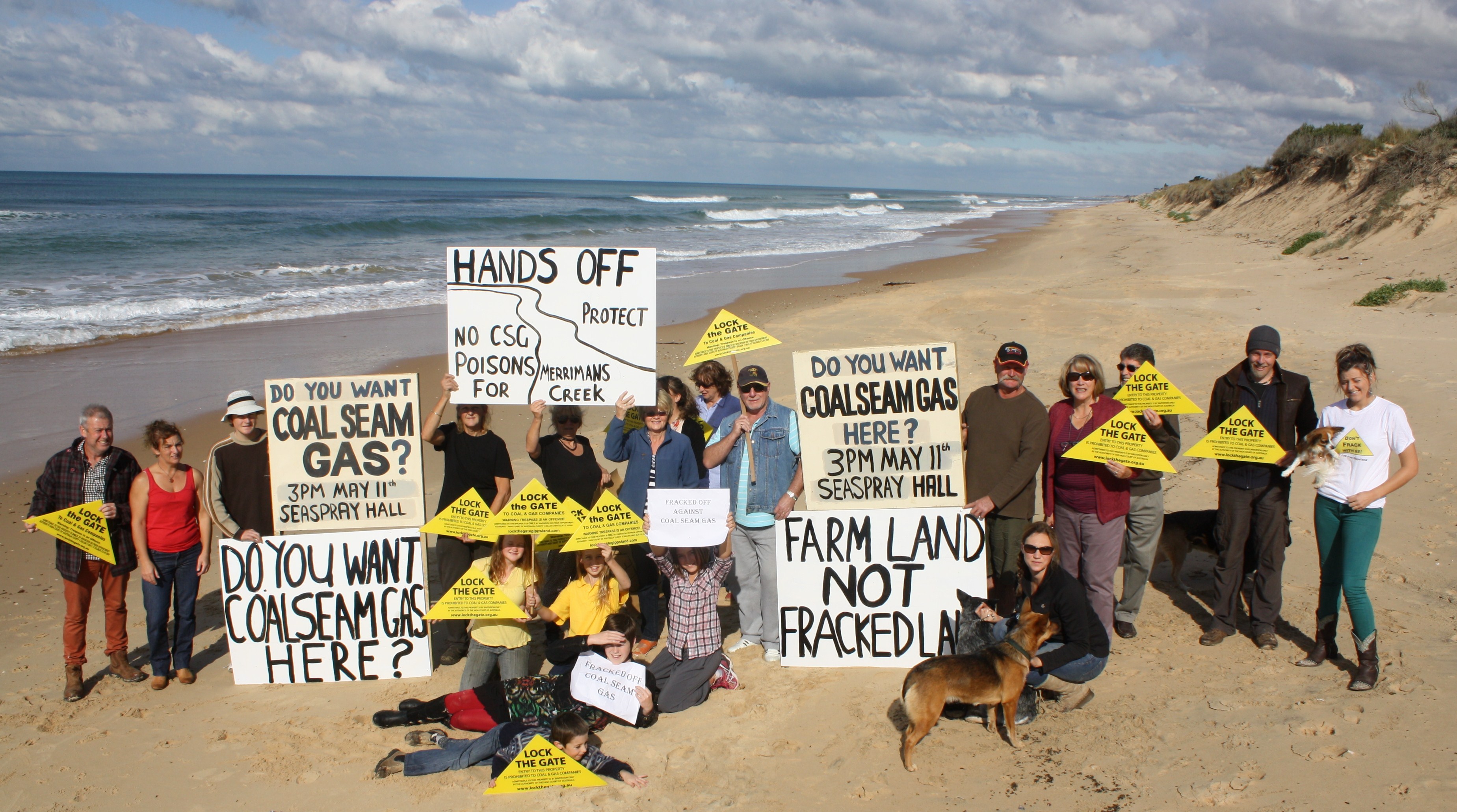 Whilst declaring ourselves Gasfield Free has no legal bearing it sends a strong message that we do not want our water, our farmland, our environment and our community put at risk by this destructive industry.

In November 2013, in response to growing community opposition to the unconventional gas industry, the Victorian state government announced it was extending the moratorium on fracking until July 2015.

At first this came as a huge relief for the Seaspray community until we learnt that the moratorium did not cover other exploration works continuing under already approved exploration licenses.

The logical next step for the Premier would have been to ban any further exploration for unconventional gas and initiate a full independent state inquiry into whether this industry could ever be safe for land, people and water. But this still has not happened.

Since then the opposition to both tight gas and coal seam gas exploration both here in Seaspray and across the state has continued to grow. With 7 other communities declaring themselves Gasfield Free in Gippsland and the first community in Western Victoria, Deans Marsh declared last month.

In December 2013, we learnt that Lakes Oil had put in an application to conduct risky horizontal drilling in Seaspray.

We have made numerous attempts through meetings, letters, phone calls and actions to make our position clear.

That we will not allow further drilling to take place in Seaspray, we will not stand by and allow our precious water to be put at risk, we are a community where 98% of residents do not want a gasfield, we will stand together, we will not give-up.

As we continue to wait to hear of the outcome of the Lakes Oil application, we have been told there will be a department decision by the end of May 2014.

Just last week Lakes Oil started moving gravel onto a road that leads to the proposed drill site. If our government abandons us and approves this license we will be blockading the site, we will be doing whatever it takes to stop Lakes Oil including taking part in peaceful non-violent direct action and risking arrest to protect our community from this threat.

If we are given no choice but to conduct a blockade as protectors of our land, our water, our community we will be calling on support from right across Victoria. We have begun setting up our camp and invite you to join us at ‘Camp Seaspray’ when the time comes.

We all need to stand together, right across this state and send a clear message that the invasive unconventional gas industry is not welcome in Seaspray, in Gippsland, in Western Victoria or anywhere in our state. The strength of our communities together can and will keep Victoria Gasfield Free.

There is still time to stop the drilling.

Tell the Minister you support the Seaspray community in their opposition to tight gas drilling.

Check here for ideas on getting your message across.

The campaign at Seaspray

Many thanks to photographer Stephen Issell for these images. 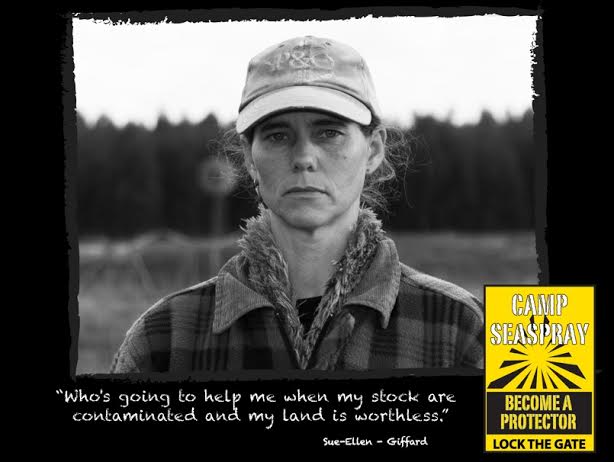 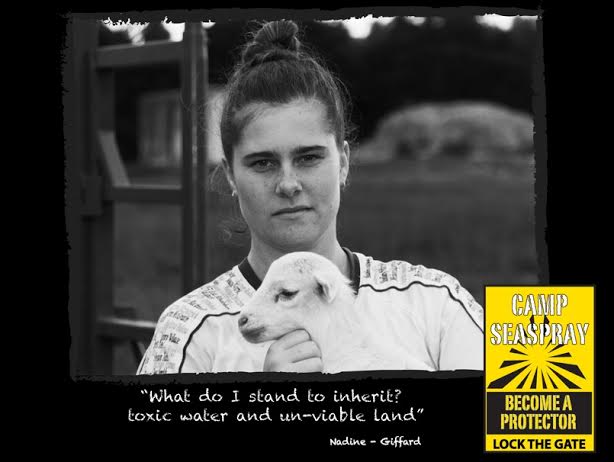 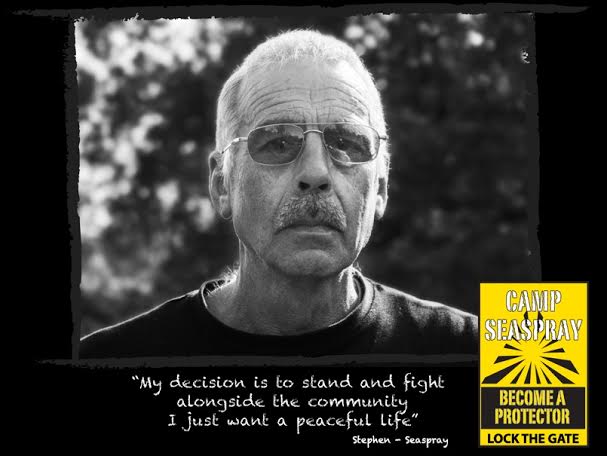 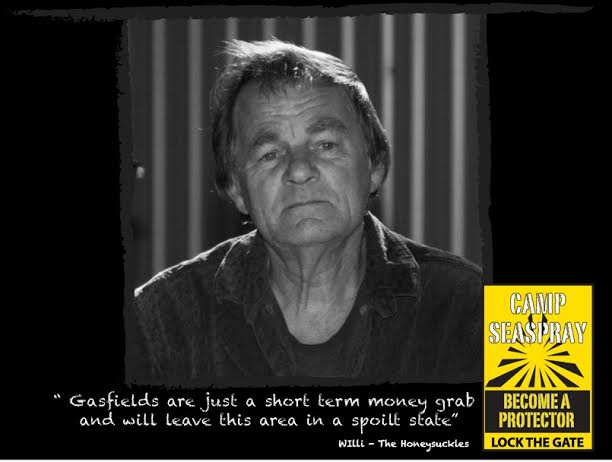 Below: Mick and Marion are from The Honeysuckles, right next door to Seaspray 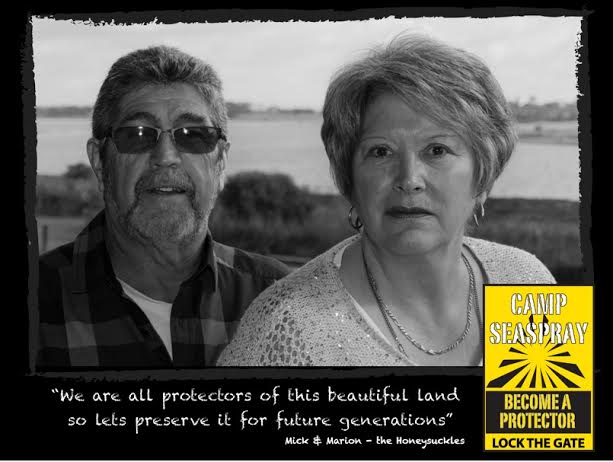 Below: Bill and Jo from Seaspray are supporting the call for direct action against gas and oil drilling. 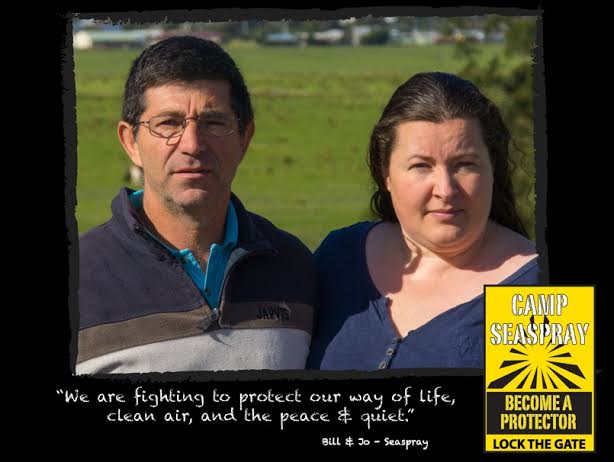 Below: Di and Trev, Seaspray. "We have worked bloody hard for our farm, now we have to fight to protect it" 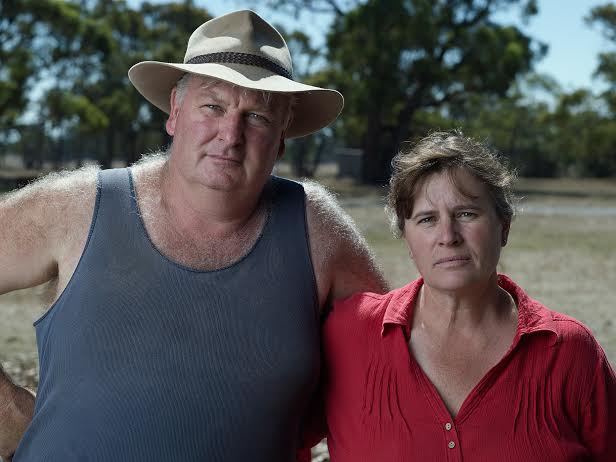 Below: May 8. setting up 'Camp Seaspray'. The camp will be basecamp for a community blockade, should it be required. 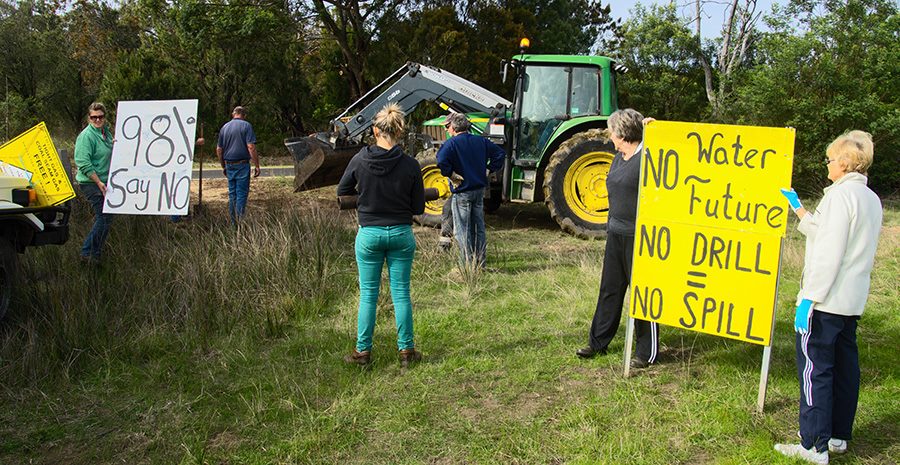 Below: early May. Lakes Oil preparing the road for access. 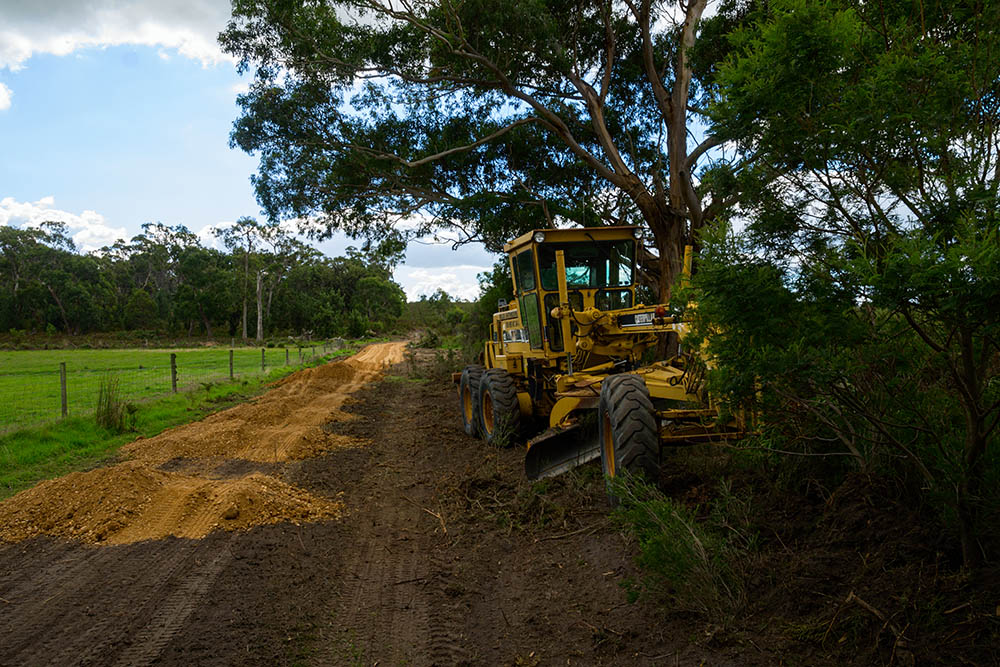