PLEASE NOTE that today's planned ride has been cancelled as a result of yesterday's announcement by the government.

On thursday May 29, community members from Seaspray in Gippsland will ride horses up Bourke Street to Parliament to announce their intention to blockade oil and gas drilling.

Please show your support by greeting them at Parliament at 1pm.

Please come along at lunchtime on Thursday the 29th to show your support for the Seaspray community in their struggle against proposed gas drilling. If an application is approved by the state government, Victoria will see the first blockades against gas and oil drilling. 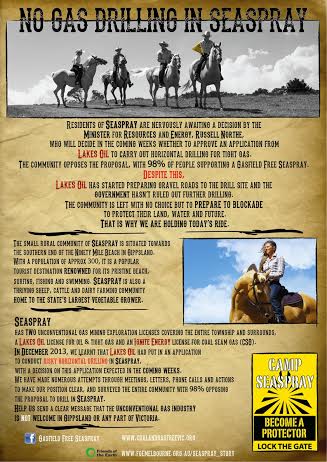 Residents of Seaspray in Gippsland are currently awaiting a decision by the Minister for Resources and Energy, Russell Northe. Mr Northe needs to decide whether to approve an application from Lakes Oil to carry out horizontal drilling just inland from Seaspray.

The community steadfastly opposes the proposal, and is currently preparing for the likelihood of having to carry out peaceful direct action in coming months.

In May 2013, local group Gasfield Free Seaspray began a door to door survey, which was conducted in Seaspray, Giffard, Glomar Beach and The Honeysuckles, asking one question ‘Do you want to declare Seaspray Gasfield Free?’ An overwhelming 98% said ‘Yes’. The town declared itself gasfield free in July 2013. Lakes Oil is refusing to accept that it is not wanted in the area.

In February locals from Seaspray in Gippsland announced their intention to blockade drilling operations if the government approves Lakes Oil Tight Gas activity.

Organised by Friends of the Earth in support of Gasfield Free Seaspray.