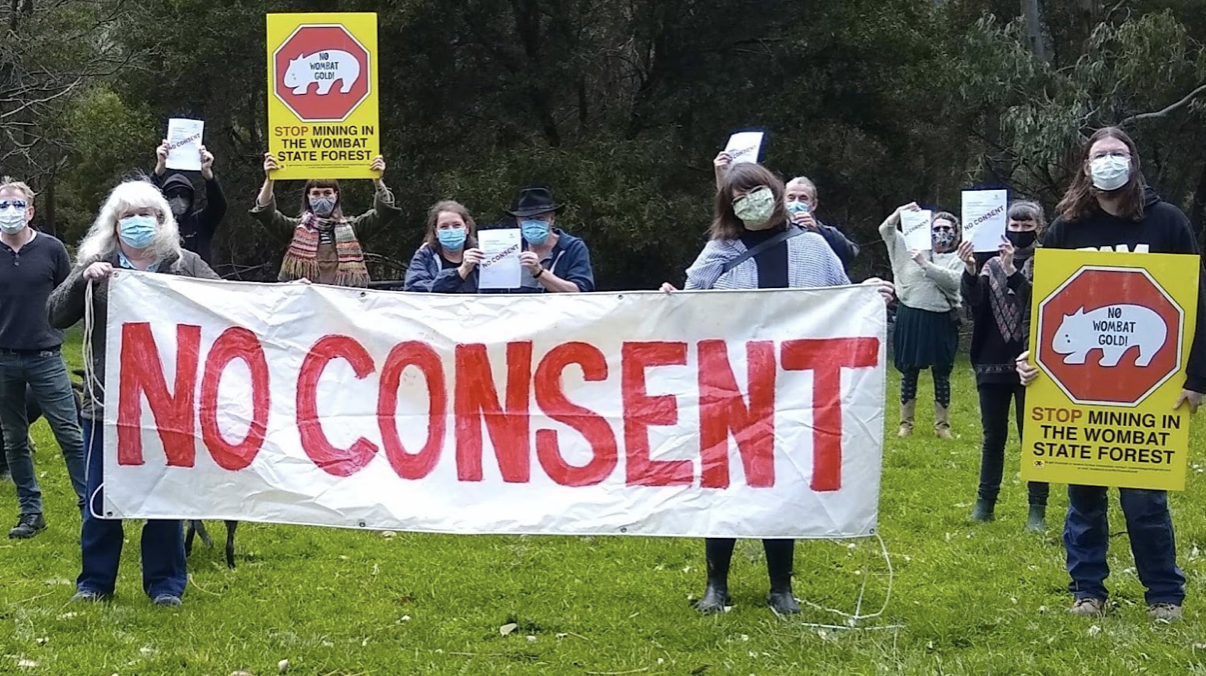 Many areas are being explored by the same companies, and this common threat has led local groups to band together to share information and campaign ideas.

Now groups from areas like Kangaroo Flat, north eastern Victoria, the Wombat Forest, Woodvale, Fosterville and the Castlemaine area are meeting once a month to develop shared campaigns against new gold mining proposals.

Communities are banding together to support landowners who have been contacted by mining companies wanting to enter their land to survey for gold, with a view to mining.  Others are impacted by new gold mines close to their properties.

Col Finnie, speaking for the No Gold Drilling (and no more gold mining) In our Shire Valleys Facebook protest group said:

“We have opposed gold exploratory drilling since December 2020 and have conducted a survey that suggests that no less than 75% of the people living in the Alpine Shire oppose more drilling and more gold mining within the tourism-focussed Upper Ovens and surrounding valleys.  Yet the local council will not support this opposition. We have lodged an objection to the behaviour of the council with the Local Government Inspectorate. There are many exploratory licences active and pending approval in the area. The area is manifestly unsuited to gold mining due to dependence on tourism and the high number of endangered or threatened species in the Shire area.”

Col added that “We are also pursuing the Alpine Shire with a request under the Freedom of Information Act to see if there is a link between a commercial arrangement with a mining company and the unfathomable continued refusal of the Council to produce a policy opposing gold mining.”

“The Wombat State Forest is a critical water catchment containing the headwaters of six major river systems. Any mining venture within the forest threatens the quality of the water supply. The entire Wombat Forest is covered by exploration licences that could eventually lead to mining ventures. The exploration activities on one lease is already causing polluted water to enter the headwaters of the Heritage-listed Lerderderg River”.

“The Wombat Forest also has many threatened flora and fauna species that need protection from environmental damage”.

“We call for a moratorium of all mineral licenses and operations in the Central West VEAC study area of the future Wombat National Park”.

The meetings aim to build a united voice for the many individuals and groups who are concerned about the prospect of a new ‘gold rush’. A range of tactics and strategies are being developed by the groups, and will be rolled out in early 2022.

Make the Switch to Cooperative Power!