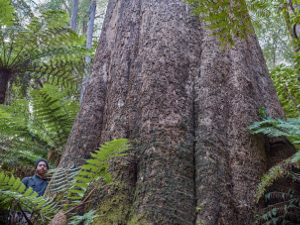 If you haven't already, please take action here - Email Environment Minister Lily D'Ambrosio calling on her to stop the logging of this beautiful forest.

We're working closely with our friends at GECO to stop this logging using a variety of different strategies, your efforts to amplify the message in the Minister's office will greatly help. 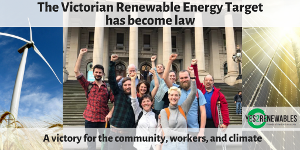 This is a great moment for Victoria's renewable energy future: after four years of community campaigning,  the VRET, the Victorian Renewable Energy Target (VRET) of 40% by 2025 became law on Friday October 20th.

It's a huge win for the community, workers, and everyone hungry for action on climate change.

The VRET was conceived in Collingwood in the dusty office of Friends of the Earth Melbourne. It was initially viewed as a quixotic idea, yet gained support from all quarters thanks to the heart and soul of the Yes 2 Renewables campaign.

We'd like to say a big thankyou to the many people involved in delivering the outcome, this achievement is thanks to community members like you who have backed the Yes 2 Renewables campaign over the years.

So what does this VRET deliver for the community?

Some 10,000 jobs will be created as Victoria rolls out a massive 5,400 megawatts of solar and wind farms--a massive fourfold increase.Importantly, it will help Victoria meet its legislated climate change goals, cutting electricity sector emissions by up to 16 percent.

Friends of the Earth Melbourne's Yes 2 Renewables campaign has long called for Victoria to set its own renewable energy target to create jobs and act on climate.

If you want to see us campaigning hard for community and climate, please support our work with an tax-deductible donation.

You can read our full response here.

Keen to get involved? Yes 2 Renewables meets every Tuesday at 6:20PM, Friends of the Earth (Upstairs), 312 Smith St, Collingwood, or get in touch  with Y2R Coordinator Pat Simons at [email protected]

The Northern Territory needs our support! 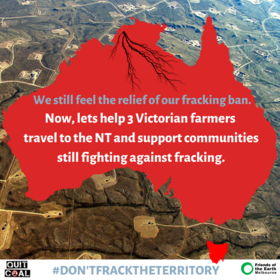 The NT Government is under immense pressure from the Feds to lift its moratorium on fracking and they’ve already sneakily started construction on the pipeline, hoping that they can force it through! But we know that they can’t do anything without community support. And the community is fighting harder than ever. Just as in Victoria, they want to see land rights, health and water protected.

Three farmers from Victoria, want to go to the NT and meet with farmers there who are facing the same fight that we won last year. Farming communities fought the gas companies here and persuaded the government to stand up for community and the environment. They know how it’s done, and they know how hard it is. They know how important it is to have support, that other people care and that they are not alone.

Victoria’s Gas Ban is an incredibly inspiring and powerful story that should be shared with other states threatened by the unconventional gas industry.

Will you help support three Victorian Farmers fly to Darwin for the Rally outside NT Parliament to share Victoria’s story of success? You can donate here.

Any contribution will go towards their flights, food and travel expenses. Their accommodation is being freely organised by the lovely Lock the Gate community. Any extra donations will go to Lock The Gate who are supporting Indigenous Leaders to travel across the NT to the same Rally.

Melbourne Day of Action on Climate Change Needs YOU! 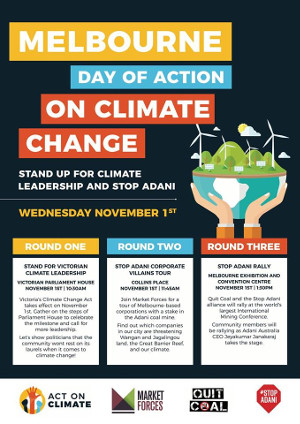 Friends of the Earth and allies in the movement have pulled together a Melbourne Day of Action on Climate Change on Wednesday 1 November. With the Turnbull government turning its back on climate change, the community needs to raise its voice. Here's how you can get involved to stand up< for climate leadership and stand against the Adani coal mine...

ROUND 1 - STAND FOR VICTORIAN CLIMATE LEADERSHIP

Victoria's Climate Change Act takes effect on November 1. Gather on the steps of Parliament House to celebrate the milestone and call for more leadership. Let's show politicians that the community wont rest on its laurels when it comes to climate change!

Join Market Forces for a tour of Melbourne-based corporations with a stake in the Adani coal mine. Find out which companies in our city are threatening Wangan and Jagalingou land, the Great Barrier Reef, and our climate.

Quit Coal and the Stop Adani alliance will rally at the world's largest International Mining Conference. Community members will be rallying as Adani Australia CEO Jeyakumar Janakaraj takes the stage.

Say NO to the Westgate Tunnel 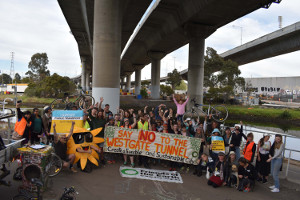 The Westgate Tunnel toll road is not the path to transport solutions. This month the Victorian Minister for Planning, Richard Wynne, will be given the choice to listen the concerns from the community or lock us into decades more of toll roads for the west.

Community members are concerned about another massive toll road through the middle of Melbourne, causing more traffic, creating more air and noise pollution, destroying the local environment and allowing more transport emissions locking us into extreme climate change. Over 500 submissions, overwhelmingly against the project, were put to the inquiry into the project.

Will our Planning Minister make the choice to listen to the concerns from the community or commit to more cars, pollution, and toll roads by doing a deal with Transurban?

Now is the time to make sure the community's voice is heard as loud as possible. Email Richard Wynne your concerns here! 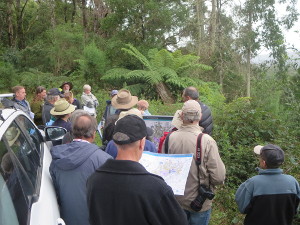 The nationally significant College Creek, located on the northern slopes of the Strzelecki Ranges, came one step closer to Reserve Status in early October, when State Minister for Energy, Environment and Climate Change, Lily D' Ambrosio announced that College Creek had been returned into public hands. FoE understands that 1200ha of land will be classified as a Special Protection Zone, before being signed off by the Governor in Council as a Forest Reserve, probably in early 2018.

FoE has worked at getting this special area protected since the mid 1990's, after the area was highlighted by Friends of Gippsland Bush. College Creek is of State Significance for Cool Temperate Rainforest and of national significance because it is the stronghold of the Slender Fork Fern on mainland Australia. In 2001 both groups supported its inclusion in the proposed Strzelecki Cores and Links Rainforest Reserve.

Almost 40% of College Creek was logged in the mid 1970's under the 1966 Wood Pulp Agreement between the State Government and Australian Paper Manufacturers. The area logged consisted of old growth and regeneration and was replanted with Mountain Ash. The leasehold became the property of Hancock Victorian Plantations in 2001, when they purchased the assets of Australian Paper Plantations.

A MoU to protect College Creek was signed in October 2006 after lobbying of the State Government by FoE and FOGB. This MOU eventually failed and was replaced with another deal in May 2008, which allowed for logging within College Creek, against the wishes of FoE and FoGB. Logging in the catchment started in 2009 and finished in 2011. Since that time, the cut over areas have hand planted with a range of indigenous species and once those plantings achieved a stipulated regeneration standard, the detailed legalities of the handback could be worked through by the State Government and Hancock. 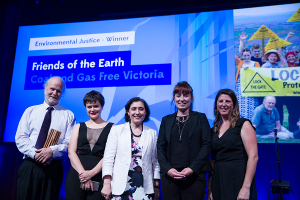 Friends of the Earth has won the Environmental Justice category in this year's Victorian Premier's Sustainability Awards for conducting an awareness campaign to alert communities to the potential threat of fracking and onshore gas mining through our Coal and Gas Free Communities campaign.

Each year, the Premier’s Sustainability Awards continue to discover Victoria’s best and most inspiring Victorian individuals, organisations and businesses which are developing and implementing new sustainable practices.

Friends of the Earth extends its congratulations to all of our volunteers, donors and supporters and of course the INSPIRING communities we are proud to have worked with. 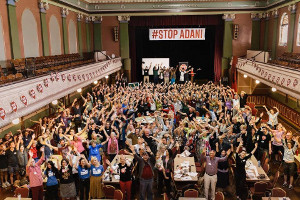 This weekend just gone was Melbourne's turn for a Stop Adani Summit. Friends of the Earth played a lead organising role along with our alliance partners.

Over 300 people took part at Fitzroy town hall, meeting other local groups working to #StopAdani, discovering together where the pressure points are, and drawing up plans to take the pressure to the next level on our Federal MPs to stop Adani’s loan.

Walk this Way was a HUGE success!! THANK YOU!!!

Walk This Way saw 100 people get together to walk through where the Westgate Tunnel development could be built, hear about what some of the other FoE campaigns have been up to, and share their vision for a sustainable city. Participants also raised over $23,000 for Friends of the Earth through sponsorship for their walking efforts! Thanks to everyone who joined in the fun!