Communities call for ban on all coal exploration in Victoria 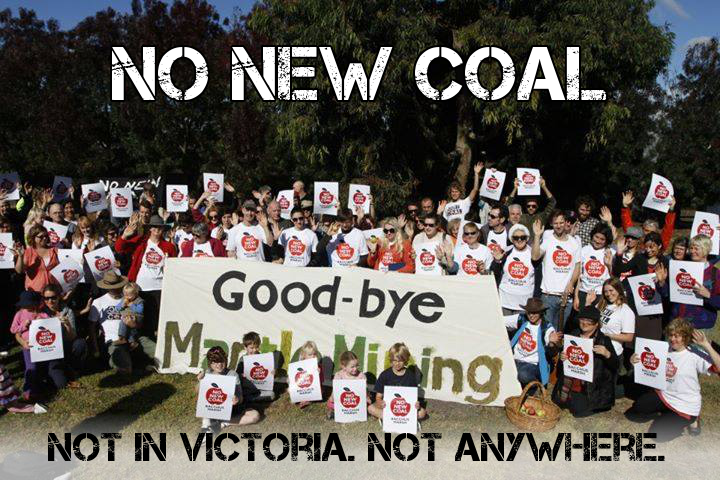 National environment group Friends of the Earth is supporting the call from regional community groups for an outright ban on all new coal development in the state.

In a powerful statement of grassroots democracy, a growing number of communities in areas marked for coal exploration are declaring themselves 'coal and gasfield free'. New 'greenfield' coal mines clearly do not have social license to operate. Yet state government departments have approved a number of exploration licenses in recent months.

“Communities are getting organised against these new proposals” said Marg Thomas of Coal and CSG Free Mirboo North. “They will be resisted every step of the way. Several of them rely on as yet untested technology. Any proposal to open new coal mines in Victoria in the 21st century would run against mainstream climate science. It is difficult to see how any export industry would be even viable given the poor quality of our coal and the long distances to any market. Export will require infrastructure, including port facilities, which would add another dimension to the cost and generate new forms of opposition, including from recreational fishers and tourism operators.”

Cam Walker, campaigns co-ordinator for Friends of the Earth said “in the 1980s, the government of the day banned the exploration and production of uranium in Victoria through the Nuclear Activities (Prohibitions) Act 1983. Given the known risks attached to this industry, this was the right decision, and has stood the test of time. There is no room for new coal mining in a densely populated state heavily reliant on it's agricultural sector. Climate science makes it clear that the vast majority of known fossil fuel reserves must remain underground if we are to have a chance of avoiding dangerous climate change. We call on the Andrews government implement a permanent ban on any new coal exploration or production.”

Friends of the Earth has launched a petition calling on the government to permanently ban new coal mining, which is available here.

“In recent weeks, more than 61 prominent Australians have declared their support for a global moratorium on new coal mines and the request from the President of Kiribati that coal be on the agenda at the Paris climate change negotiations in November. Banning coal production here would show that Victoria is prepared to play it's part in taking leadership on the global crisis of climate change” Mr Walker concluded.