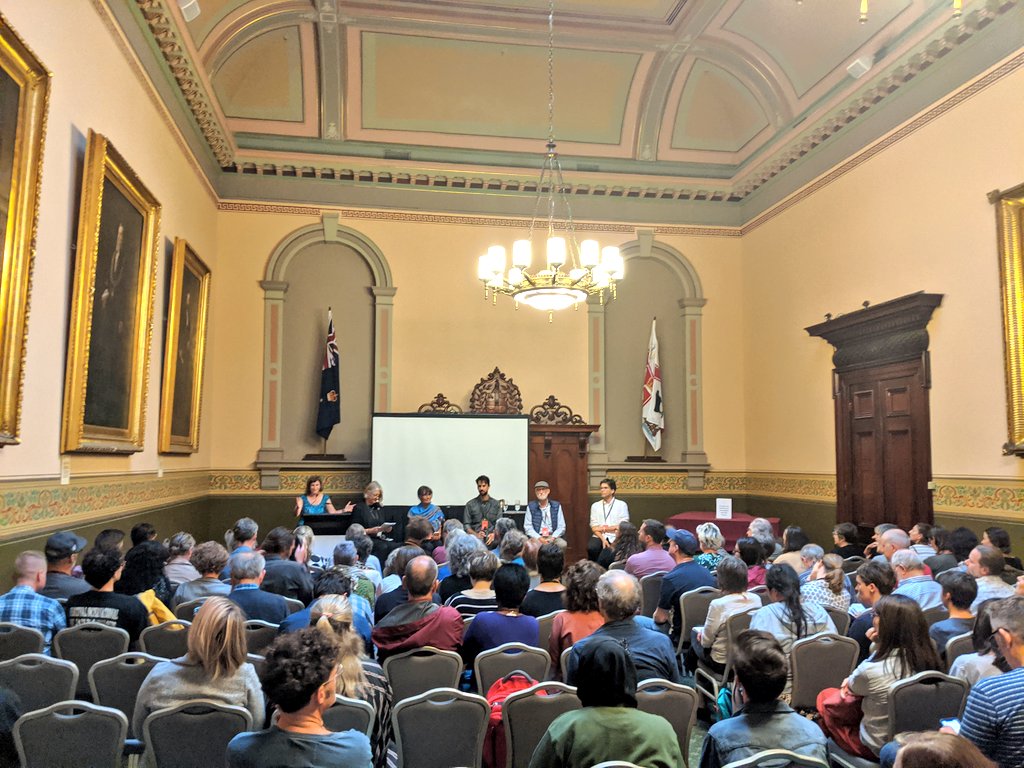 The summit's declaration was to call for a new approach to climate action in Australia, one which properly addresses the scale and seriousness of the climate crisis.

One message came through strongly: The climate crisis is an emergency. It's too late for half measures. The time to act is now.

Act on Climate coordinator Leigh Ewbank was among the summit's list of outstanding speakers. Leigh presented a thought-provoking speech on the 'climate emergency' framing. He urged us to think critically about our responses to the climate crisis.

Jean Hinchliffe, organiser for School Strike 4 Climate, brought attention to the state of play around climate politics: "We don't want to strike..." she said, "but we simply aren't listened to otherwise." (You can listen back to the panel discussion here.)

Nyadal Nyuon, a litigator and community advocate, brought attention to the fact that the climate crisis is a matter for justice now, especially when looking at the disproportionate effects on people in the global south. It's not just a future problem. (You can listen back to the panel following Nyadal Nyuon's address here.)

Others such as Sam La Rocca, Tim Hollo, and Nicole Rogers brought a critical perspective to the idea of declaring a climate emergency, noting the importance of justice and democracy.

Act on Climate coordinator Leigh Ewbank was among the summit's list of outstanding speakers. Leigh presented a thought-provoking speech on the 'climate emergency' framing. He urged us to think critically about our responses to the climate crisis.

You can read Leigh's speech below:

It’s the year 2023. The Australian government has declared a climate emergency. The government is developing ten-year transition plan for the whole economy to reach zero emissions. A national rollout of Victoria’s solar home scheme has cut power bills for householders and delivered the largest drop of emissions in the country’s history.

Hands up if you think this is a good outcome. Open your eyes. Look around.

It’s the year 2023. The Australian government has declared a state of climate emergency. To decarbonise the energy sector, it has suspended planning process and will build a nuclear power plant for each capital city. The Prime Minister has increased funding to Border Force to defend the country from an increase in refugees. Military engineers have been deployed to build more dams, and sea walls to protect valuable assets.

Hands up if you think this is a good outcome. Open your eyes. Look around.

The point of the exercise is to underscore that the climate emergency concept is a new frame that’s un-defined and value neutral. We have work to do to ensure the concept is filled with values that protect democracy and deliver fair and just responses. We can’t assume that justice will prevail and that only people with good intent will engage with it. We have work to do to prevent the frame from being co-opted by opportunists pedalling false solutions and authoritarian values.

The reason why I say this is that the emergence of the concept isn’t occurring in a vacuum.

It’s occurring in a social and political context where Australia’s democracy has been downgraded from “open” to “narrow”; we’re seeing the rise of right-wing populism and “strong man” political leaders around the world, as well as a “post-truth” information age.

David Roberts, an American columnist who has been engaged with climate policy and politics since the early 2000s, has expressed a concern that the Republicans and Trump could jump from climate denial straight to eco-fascism. (Reinforcing the need for a border wall, etc.).

In France, a spokesperson for Marine Le Pen’s National hard-right party explained: “Borders are the environment's greatest ally. It is through them that we will save the planet.”

“Forget China and America having too much influence over us, it will be Australians fleeing climate change who will be the real problem,” writes Martyn Bradbury of the New Zealand publication The Daily Blog. “Fortress Aotearoa will become a pressing demand from locals trying to protect the last life boat from becoming an Australian territory...

"The current political spectrum does not have the capacity to force through the radical adaptation we will require to survive the next phase of the climate crisis."

In Australia, Jeff Sparrow has warned that climate emergency can endanger democracy. He encourages people to consider the implications of emergency declarations and war-time rhetoric:

“Historically, a declaration of emergency — whether in response to war, civil unrest or natural disaster — allows the state to abolish politics, suppressing debate and discussion so as to enable a militarised response to an urgent problem.

“If we're going to resolve the environmental crisis with any measure of justice, we need more of that participation, not less. We need the entire population involved in debating and discussing how the burden of rapid economic and social change might be equitably shared.”

And that’s why we’re here today.

Deepening democracy is essential in our responses to the climate crisis.

The Green New Deal, with its integrated approach to tackling inequality, unemployment, and the climate crisis, gives me a lot of hope.

The Green New Deal provides a vehicle to us to engage with our communities and to demonstrate our movement’s commitment to democracy, to understanding the barriers that preventing communities from taking action, and working with each other to develop just and effective solutions.

Through taking this approach we can avoid the pitfalls of top-down directives and inadvertently unleashing reactionary forces, something I’ve seen with community resistance to wind farms.

From my experience working in communities, some of which have never seen a climate activist before, I recommend a few practical tools for deepening our democracy.

Firstly, listen and finding common ground. It is a foundation for collaboration and helping each other achieve mutually-beneficial outcomes. This was the central to the successful campaigns for a fracking ban a VRET.

Secondly, draw on the precautionary principle. In our work as community activists we can seek out marginal voices to understand if there will be unintended consequences of our actions.

Finally, checks and balances. When calling on governments to act, what measures are needed to prevent abuses of power as we tackle the climate crisis?

Democracy is derived from Greek words “demos” for “common people” and “kratos” for “rule.”

Emergency comes from the Latin word “emergere”, meaning “rise up.”

Let’s work together to ensure that the climate emergency is defined by the common people, controlled by the community, and a bottom up process that emerges from community.

See you on the campaign trail.