Victorian Minister for Water Lisa Neville announced today that she will step up to limit water extraction below the Barmah Choke with a new licence review process.

The Minister has directed Lower Murray Water and Goulburn Murray Water to refer all licence applications in the lower Murray region to her for assessment for the next 12 months. 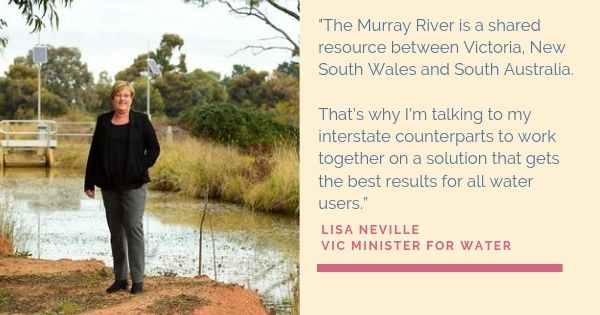 The Minister has brought this on stating “We have to make sure the risks to the environment and Victorian entitlement holders don’t increase due to more extractions – that’s why I will personally review all licence applications for the next year.”

River Country and Friends of the Earth welcome this move to put the breaks on downstream irrigation demand, but this move is something Victoria can't do on their own.

We need the Minister to take the issue to the next meeting of the Murray Darling Basin Ministerial Council and urge South Australia to adopt the same policy to stop new developments simply crossing state boundries to secure their water licenses.

It's an important first step in tackling the deep issues caused by over allocation of water in the Murray Darling Basin, but to see real improvement the Minister must work to get the Basin Plan back on track.

Together with the groups and community members from across the Basin, we have developed a community action plan to restore intergrity in the Murray Darling Basin Plan.

We need the Minister to follow up this announcement with a commitment to fix the deep structural issues in the Murray Darling Basin Plan.

Email Lisa Neville to welcome this announcement and urge her to go further.

The past summer has been an extraordinary year on the Goulburn, and we can't have the rivers swamped in summer because of high irrigation demand downstream.