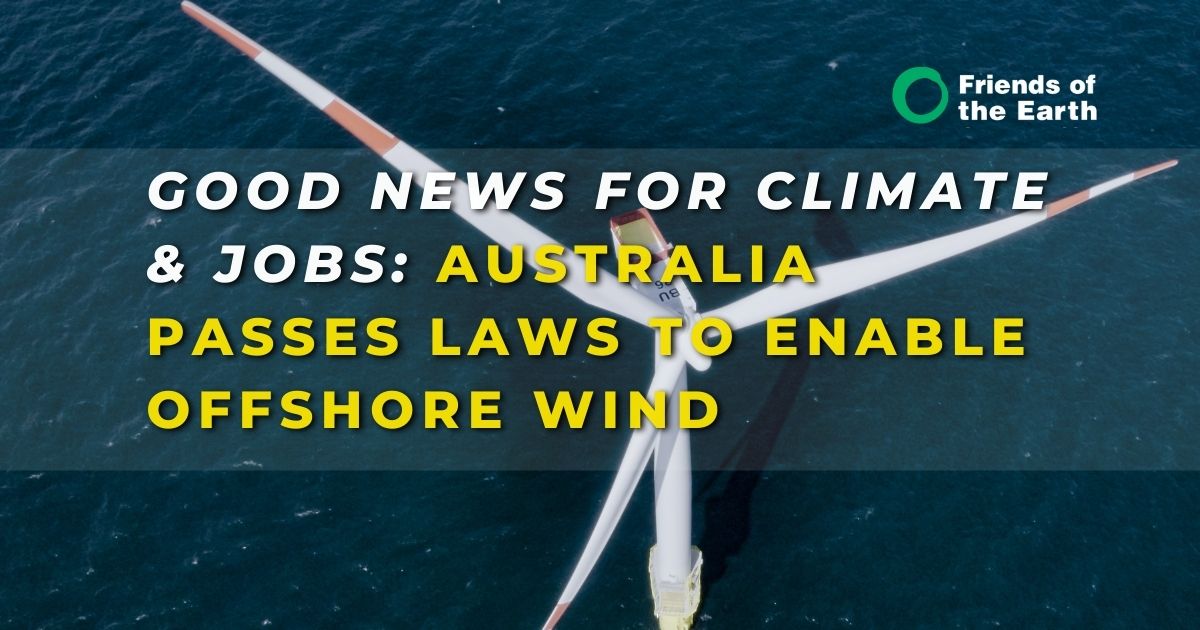 After years of campaigning by unions and climate groups, the Australian Senate has today passed legislation to establish offshore wind in Commonwealth Waters.

Friends of the Earth says the legislation has been a long-time coming, and is the first critical step towards establishing an industry that can deliver deep emissions cuts and thousands of jobs.

“Australia has taken the first critical step to establishing a jobs-rich offshore wind industry that will boost efforts to tackle the climate crisis,” said Pat Simons, Friends of the Earth’s renewable energy spokesperson.

The announcement comes just a week after the Morrison government signed on to the Glasgow Climate Pact—an agreement that urges Australia to announce an increased 2030 climate target at the COP27 summit.

Friends of the Earth says the next immediate step is for the Morrison government to begin public consultation on declaring ‘Offshore Wind Zones’:

“The Morrison government must declare Offshore Wind Zones as soon as possible so that Gippsland communities can benefit from projects proposed for the region,” said Pat Simons.

Friends of the Earth support offshore wind developments where there is strong engagement with First Nations, workers and the wider community, and comprehensive environmental protections.

Together these proposals could deliver 4.7GW of new renewable energy generation, power 3.2 million homes and create up to 5,600 jobs, putting the Gippsland region at the forefront of a new offshore wind industry.

Offshore wind is capturing the community’s imagination in regions that have traditionally been home to fossil fuel generation, like the Latrobe Valley in Gippsland.

“People in Gippsland are excited about the chance to host the country’s first offshore wind project Star of the South, a well advanced project, and this news will be welcomed in the community” said Wendy Farmer, Friends of the Earth’s Gippsland renewable energy campaigner.

“Wind power represents a new vision for Gippsland, offering thousands of new jobs and opening the door to many other opportunities for the region as we transition from coal and gas to the renewable energy system of the future” added Farmer.

Friends of the Earth will continue to work with communities to campaign for offshore wind, jobs, and climate justice.