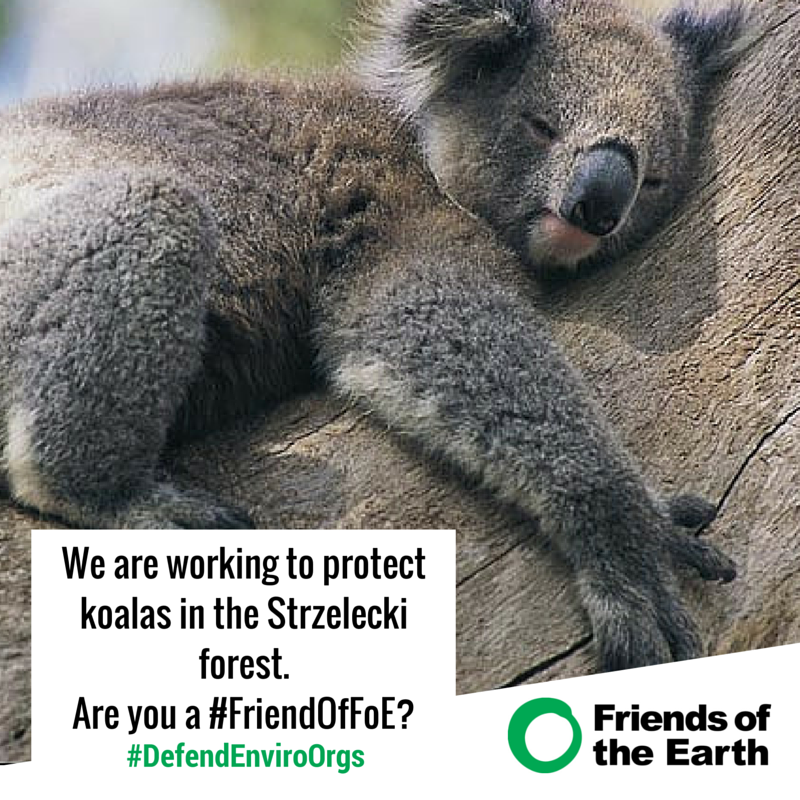 Tax time is fast approaching - as is the federal election - and things are go, go, go at FoE!

Whilst the attack on our charitable status continues via the House Of Reps Inquiry in to the Register of Environmental Organisation, you can still claim any donations over $2 to FoE as a tax deduction.

Please donate to FoE today to ensure that we can stave of this attack, whilst continuing to keep our grassroots led campaigns for social and environmental justice going.

We are Still Waiting and Ready for Anything 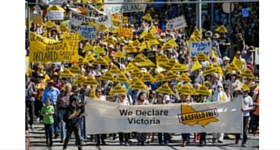 Victorians have been fighting long and hard for a ban on onshore gas and are still waiting for an outcome.

73 communities have made coal and gasfield free declarations with an over 95% average in agreement. They have kept up an exhausting fight, producing films, videos, memes and twitter feed. Extraordinary human signs, ute signs and even a sheep sign have been organised and aerially photographed. They have been holding meetings, informing communities, taking part in hearings and holding market stalls. Marches and demonstrations have been held in Melbourne with an array of yellow signs, a giant yellow sun made of Lock the Gate signs and an amazing scroll rolled out on the steps of Parliament when we declared Victoria Gasfield Free.

We are now awaiting the outcome of the Labor government's inquiry. The announcement is due on June 8th. We are hopeful, thanks to all of the work done by FoE and Coal and Gas Free Vic with Quit Coal. Still we are well versed in taking action, and ready for anything.

We need your support, especially at this time. So if you are able to sign our pledge to continue to fight onshore gas here: http://www.melbourne.foe.org.au/pledge_ban_gas, or donate here to support Quit Coal's Coal and Gas Free Vic campaign:
https://friendsofearthmelbourne.nationbuilder.com/quit_coal_monthly_donations. 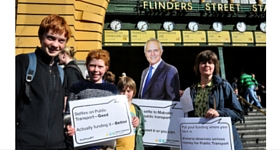 The Public Transport not Traffic campaign have created a unique way for public transport users to get a message to Malcolm Turnbull this election.  We'll be travelling the transport network visiting train stations, tram and bus stops to give regular users the chance to snap a #Selfie4PT with our life size cardboard Malcolm Turnbull, and ask him to fund public transport projects for Victorians this election.

The Selfies4PT campaign is born out of our disappointment that the Prime Minister, while happy to take selfies of himself aboard our cities' trams and trains, is continuing Tony Abbott's war on public transport projects in Victoria. This has been confirmed with the recent announcement that less than 1% of the $1.5 billion infrastructure allocation for Victoria is going to public transport projects. We are hoping to use the election to call on Mr Turnbull to give Victorian PT projects their fair share. 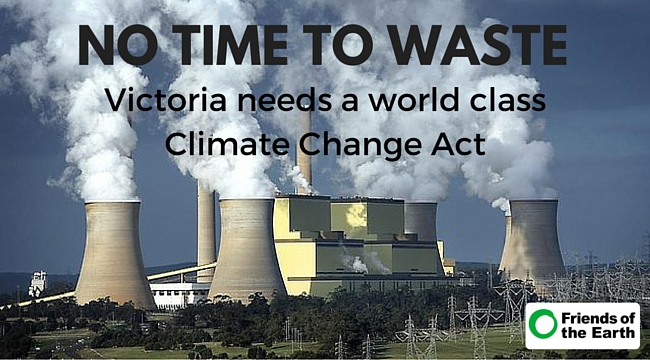 As has been reported in recent newsletters, we are getting very close to a number of significant announcements by the state ALP government:

We are doing our best to encourage the government to enact a permanent ban on all onshore gas drilling (please sign our petition here if you haven’t already) and set high VRETs, which will help drive us towards a rapid transition to 100% renewables (our petition calling for high ambition targets is here).

Now that the government has released the independent review into the state’s Environment Protection Agency (EPA), it will soon announce how it intends to respond to the review of the Climate Change Act. This Act is important because it is a whole of government framework that should define our state’s key response to climate change. However, it was gutted by the Coalition when they came to power in 2010 and needs to be rebuilt. The good news is that the review of the EPA recommends giving the authority more power to regulate carbon dioxide – a key way to start the transition away from coal.

We have spent the last 5 years building regional support for renewables and opposition to new coal and gas proposals. We are now starting to re-focus our campaign capacity onto getting the required rapid transition away from coal that climate science tells us is vital.

Please help us to convince the government that the community wants a rapid transition away from our current reliance on coal to produce our electricity.

A renewed Climate Change Act needs to have deep emissions reductions targets built into its review. Combined with a strong VRET and renewable energy action plan, this Act needs to both frame and drive the rapid transition away from coal, with a just transition plan for communities which will be affected.

The review of the Climate Change Act is the best chance we will have in the next two years to get a meaningful framework enshrined in government legislation to actually start the transition…. So please let’s make this huge!

Or, if you’re a little short for time, please sign our petition to the premier here.

College Creek to be protected after a 20 year long battle! 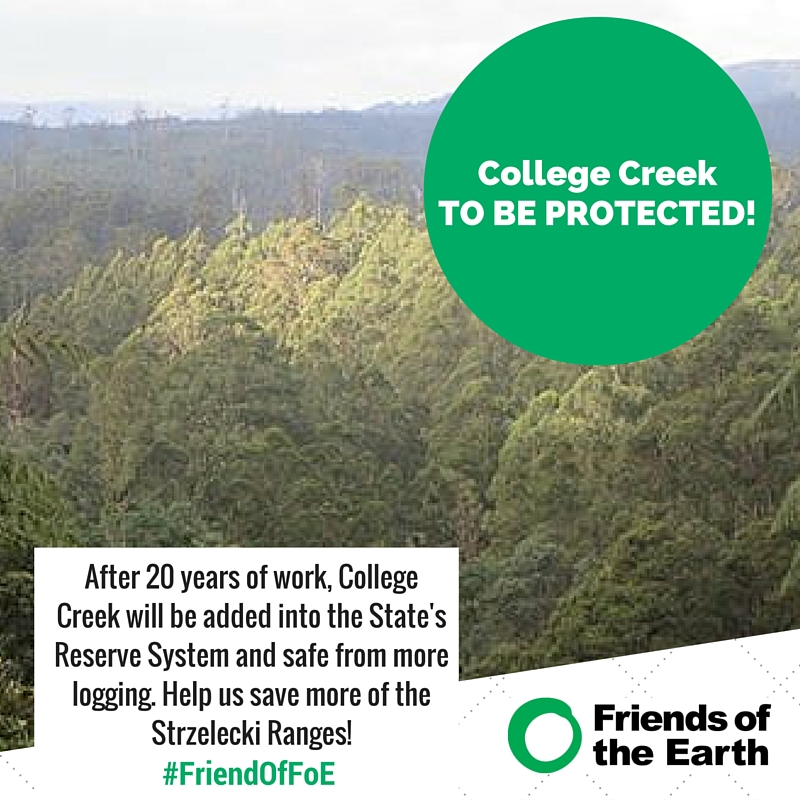 After a 20 year campaign, Friends of the Earth was informed last week Friday that College Creek, in Victoria's Strzelecki Ranges will soon be added to the State's Reserve system. The College Creek handover will be the first package of land comprising of 8500ha that will be gradually handed back over the next few years.

The Strzelecki Ranges is the most depleted bioregion in Victoria and the protection of core rainforest catchments of the region has been the major focus of FoE's plantation campaign since the mid 1990's.

The work was carried out in conjunction with Susie Zent from Friends of Gippsland Bush.

We have been running on the smell of an oily rag for some time so donations to make sure taht this important work can continue would be greatly appreciated.

Punks for West Papua - the documentary 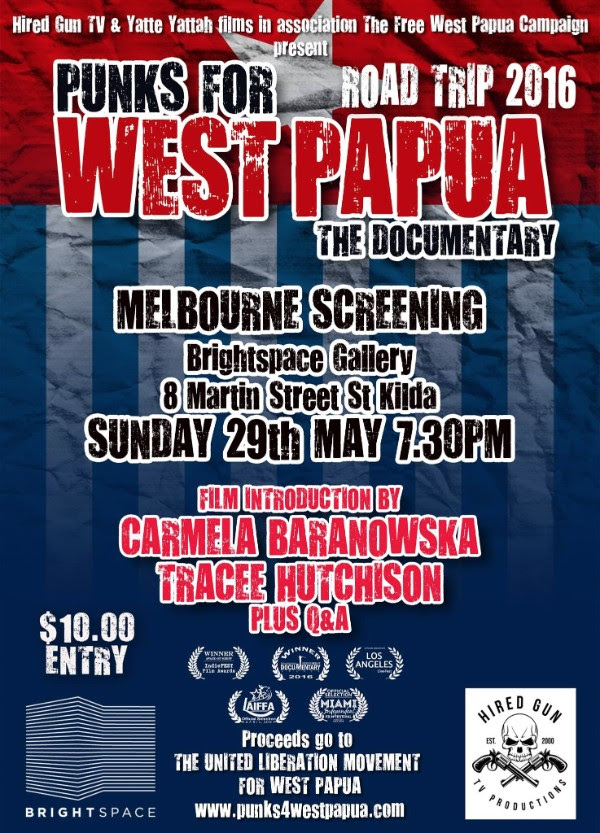 Created by Ash Brennan and narrated by Basia Bonkowski, this 46 minute film tells of the Aussie punk scene’s fight for the West Papuans, where a fundraising event transformed into an Australia wide benefit involving over 50 bands in 7 cities around the country, making Punks For West Papua the biggest and no doubt loudest punk rock showcase in the nation’s history. Sydney punk band Diggers With Attitude’s Jody Bartolo spearheaded the movement, and a midnight text message to friend Ash Brennan started the wheels in motion to video the events and create the documentary.

“Punks For West Papua” is an intriguing story of one man’s selfless gesture that inspired a nation, and is recommended viewing for not just fans of punk rock but for anybody who believes in justice.

VIEW the trailer of the documentary.

The movie is also available to be purchased online, and the Facebook Page is here.

Friends of the Earth welcomes the new integrated Energy, Environment and Climate Change portfolio emerging out of a reshuffle of the Victorian cabinet earlier this week.

Lily D'Ambrosio has worked hard in energy and resources. We expect she will bring the same focus to her new portfolio. Given the interconnection between climate, energy and environment it makes sense to bring these issues together into a single portfolio.

With alarming climate change science emerging in 2016 and the western and northern districts of the state in the grips of drought, Victoria needs a minister with drive and determination to spearhead the state's response to climate change.

You can read our full response here.

Change the World with Your Song 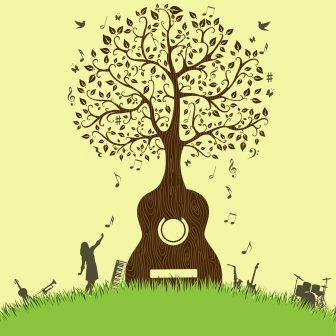 Two and a half years ago after a festival stall in Eltham, VIC, the “Change the world with your song” competition was born, designed to generate wider interest in important issues, through people talking, writing and singing about them.
The competition is:
Entries Opens 1 June and closes 15 August 2016:  http://changetheworldwithyoursong.com/
Support the competition by:
Keen to help out? We need:
The Annual Dirt Radio/3CR Radiothon is coming - 6 to 19 June! 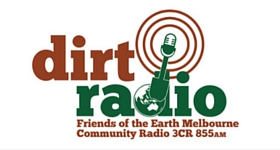 Dirt Radio, 3CR 855 AM,  is Friends of the Earth’s weekly radio show providing up-dates and in-depth analysis on all FoE and related environmental and social justice campaigns. Combining on-the-spot coverage of unfolding campaign events from front-line activists and extended discussion of environmental politics and strategies, Dirt Radio now heads into its 5th year on air.

But to keep us ‘pumping up the volume’ for FoE, we need your support! The annual Dirt Radio/3CR Radiothon is coming 6th – 19th June, and this year marks a special time for 3CR – 40 years of broadcasting radical radio. 3CR’s independence means they are able to provide news and analysis from the ground up without worrying about what advertisers will think or what the ratings or opinion polls say because the issues they cover on-air are determined by people in the community.

So, to make sure that Dirt Radio can keep those FoE campaigns front and centre, and that 3CR can continue to thrive as resilient and radical radio, donate now to support Dirt Radio… and 40 more years of radical voices.

Catch Dirt Radio – Mondays, 3CR 855AM, 10:30-11:00 each week. Available as podcast and audio on-demand http://www.3cr.org.au/dirtradio, and be sure to listen: a special Dirt Radio series ‘Auto-biography of an activist’, where long-time Friends of the Earth campaigners take some time out to explain how they got started with the organisation, campaigning highlights. and what sustains them to keep fighting. 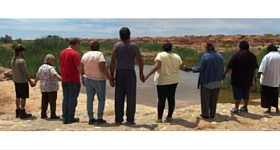 FoE anti-nuclear campaigners have also been working with communities in several states and territories who are being targeted by the Turnbull government for a national nuclear waste dump. In April, the federal government that just one of the sites remains under consideration ‒ Aboriginal land in the Flinders Ranges of SA. FoE has been working closely with Adnyamathanha Traditional Owners who are united in their opposition to the proposed dump. FoE Melbourne ACE activists have made numerous trips to the Flinders Ranges and we hosted a Melbourne visit by Adnyamathanha Traditional Owners Regina and Vivianne McKenzie to raise awareness about their struggle (the responsible minister is Kooyong MP Josh Frydenberg). FoE has also been deeply engaged with the broader policy debates about responsible radioactive waste management policies. More information is posted at www.foe.org.au/waste.

From July 1‒3, FoE activists will be participating in the 'Lizard Bites Back' protest at the Olympic Dam uranium mine near Roxby Downs in South Australia. The protest is being organised by the Desert Liberation Front and is a follow-up to the very successful 2012 Lizards Revenge protest. In addition to protests, the 'protestival' will include bands and DJs, DIY Hi Fi Solar Powered sound system extravaganza and wind-powered cinema. Combat Wombat, Futurelic, and many others will perform. For more info: http://lizardbitesback.net/; Facebook: Lizard Bites Back; Information on the 2012 protest: www.foe.org.au/anti-nuclear/issues/oz/u/roxby.

We're in great need of funds to support our work, with the working trips to SA depleting our funds.

Please donate to support our work