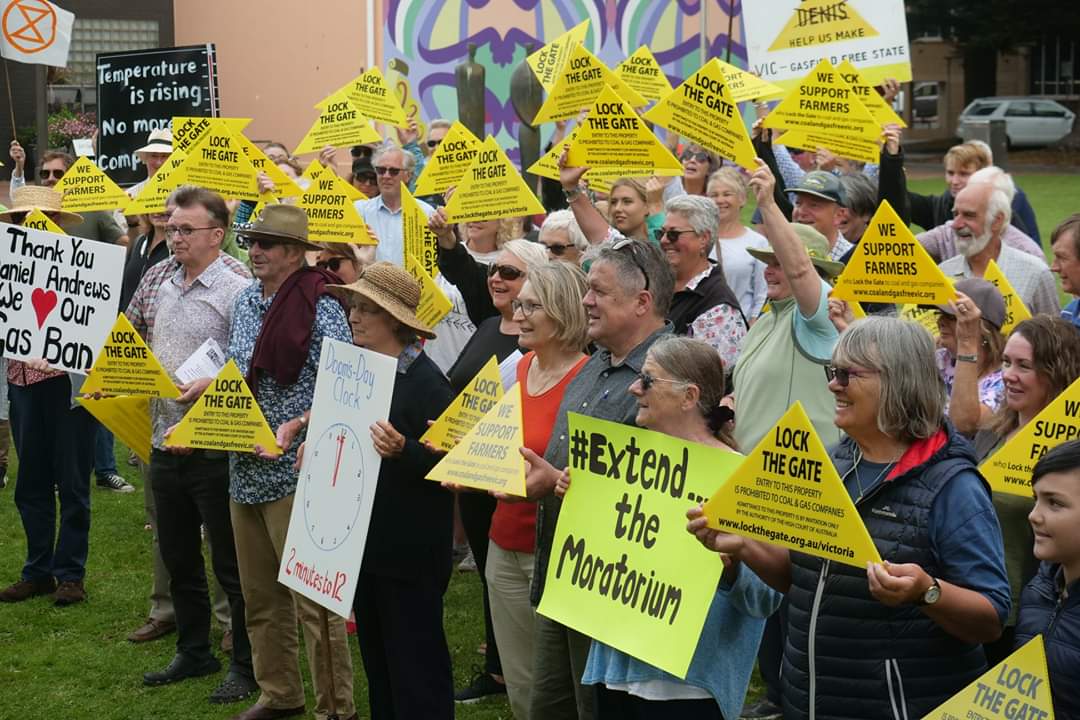 Yesterday the Victorian Liberal Nationals opposition announced a new plan to ‘Unlock Victoria’s Natural Gas Potential’ in a policy which would scrap the current moratorium on onshore conventional gas drilling in the state.

Despite pledging support for the Andrew’s Government’s ban on unconventional gas drilling (fracking), and a right of veto for farmers, the new policy contradicts the party’s previous support for the moratorium when it was enacted in 2014.

The Coalition enacted the moratorium while they were in power in large part because of the strong opposition from farmers in regional Victoria to any form of gas drilling operations on agricultural land.

Six years on and farmers have again called on both sides of politics to commit to an extension of the moratorium on onshore drilling. As part of a statewide weekend of action in February 2020, Dartmoor beef farmer Michael Greenham, also a spokesperson for No Gasfields Lower Glenelg, said the moratorium should stay in place.

"Our position is that we want to see the moratorium retained, we don't want to see onshore gas explorations in the south-west, mainly due to climate change," he said.

"The commercial benefit of gas extraction is a reality, but the value of the south-west's high rainfall and the agricultural production in our area is only going to increase. It's a greater commercial imperative to maintain that than threaten it with an alternative industry that is a short term industry.

Friends of the Earth supports the farmers and community groups from Gippsland to Cape Bridgewater who are calling for an additional five year extension to the moratorium.

You can add your name to the call here

“The right of veto clause can be expected to internalise conflict in communities. What will happen when one person signs off on gas production and becomes the recipient of royalties – while all their neighbours inherit an industrialised landscape which has the potential to put at risk their livelihood, without any benefits?” Friends of the Earth’s Warrnambool-based representative Jemila Rushton said today.

The opposition claims that the provision of cheaper power for Victorians and low emissions are at the core of the announcement. Friends of the Earth’s Campaigns Coordinator Cam Walker describes the announcement as an ideological position, not sensible energy policy.

“Gas is not ‘sustainable’. It is a non renewable resource with a limited remaining lifespan – offshore production has peaked and is in decline. With scarcity will come higher prices, this means that over time gas prices will go up.  A plan to encourage continued gas use will lock consumers into higher prices, rather than alleviate the financial burden of energy consumers.”

He continues, “the policy claims gas will provide baseload, however it is well known that gas is not used for baseload energy production. Gas is generally only used for ‘peak load’ moments like exceptionally hot summer days when huge demand is put on electricity supply.  A forward thinking party would encourage ‘energy switching’ away from gas to cheaper renewable energy.”

The opposition policy has failed to address the climate impacts of gas production, including fugitive emissions. Methane emissions from the gas industry are identified as a major hurdle in global efforts to combat the climate crisis by the United Nations Framework Convention on Climate Change.

The results of studies into the commercial viable onshore gas reserves in Victoria have yet to be made public.  The opposition appears to have jumped the gun with this policy announcement, failing to review the results of the Victorian Gas Program due to be announced prior to June 30.

Friends of the Earth is aware that gas company AGL have estimated that even if the gas was removed and reserves were deemed viable to drill, it would take 7 – 10 years to prove up the gas resource, secure approvals, and start production. This means that even if cheaper gas can be found in western Victoria, it cannot be expected to reduce prices for Victorians in the short term.

Read more of our analysis of the gas market in Victoria here.

Send an email to the Premier calling for an extension to the moratorium.