Just because toxic amounts can be small, does it mean they are safe?

Friends of the Earth has been investigating the impacts of pollutants such as pesticides and PFAS for years. Detections of pesticides are commonly found in waterways across Australia and drinking water can be impacted by a range of substances such as Trihalomethanes. However, instances of these substances breaching health guidelines are limited, meaning that most detections will fall well under what is considered by State and Federal Governments to be safe. But the safety issue is not as simple as that. Professor Alfred Poulos explains. 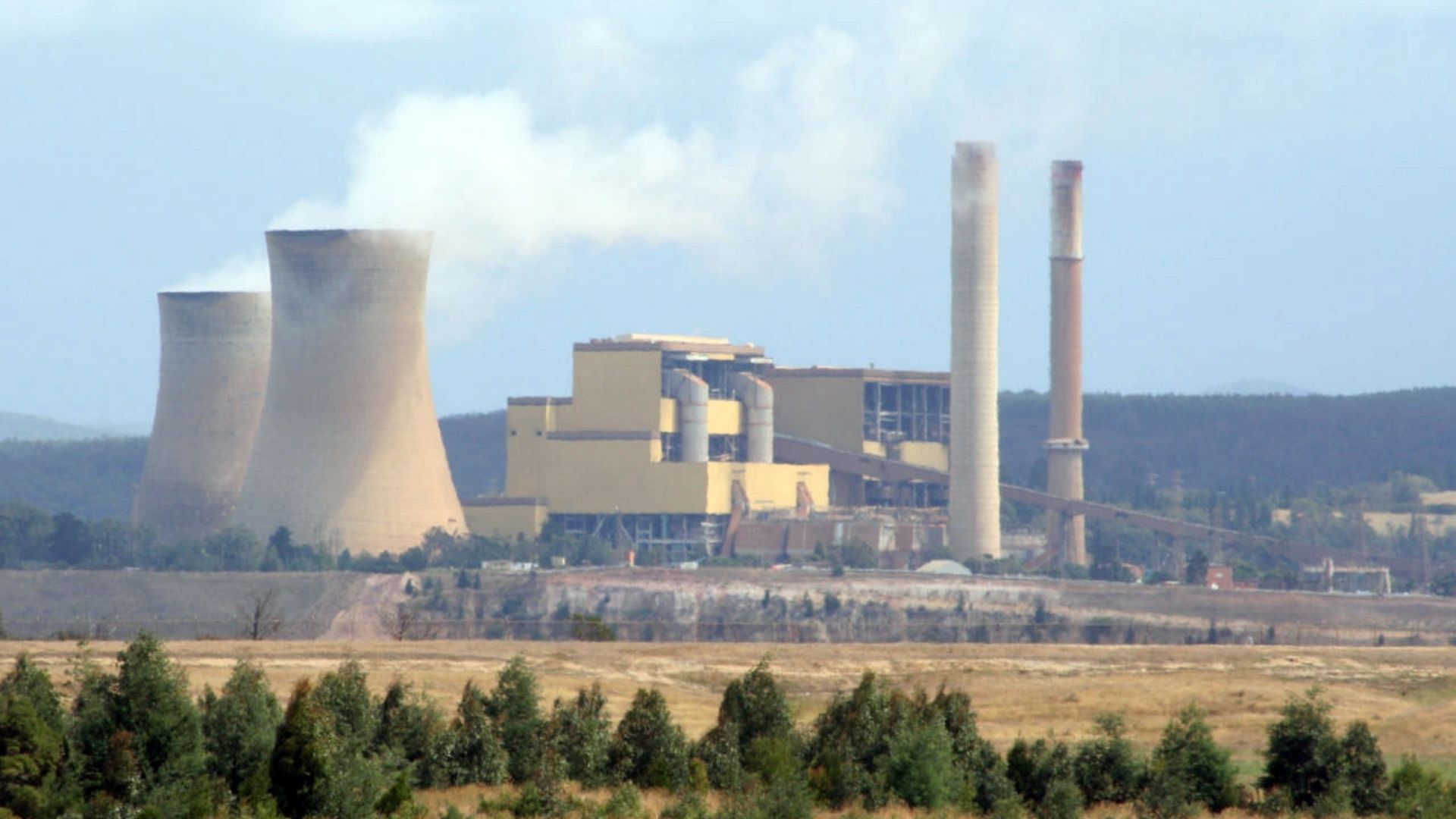 Burning of coal can release sulfur dioxide, nitrogen oxide, lead, mercury, cadmium, arsenic and even radio isotopes thorium and strontium. People working in or living nearby or downwind of power plants will be exposed to a range of toxic substances.  Image: Environmental Justice Australia

Some appreciation of the problem of chemical pollution is apparent from the USA Toxic Substances Inventory which lists more than 80,000 industrial chemicals. The Australian Pesticide and Veterinary Medicine Authority lists more than 3,000 herbicide, 1,300 pesticide and fungicide chemicals while there are 90,000 registered therapeutic Goods, mostly drugs and supplements registered with the
Australian Therapeutic Goods Administration.

Plastics in particular are a major source of pollution. There are many different types of plastics. In addition to the plastic polymers and monomers, plastics may contain a variety of other chemicals including initiators, antioxidants, dyes/inks, flame retardants, light stabilisers, plasticisers, lubricants, whitening agents, and anti-microbials. Environmental degradation of plastics results in the slow
release of the various chemical components. Tiny plastics particles, referred to as micro-plastics, are also generated from the breakdown of plastics and are now found everywhere including the oceans, rivers, lakes and even in reservoirs and tap water. They are of particular concern because of their ability to bind other chemicals, including pollutants. 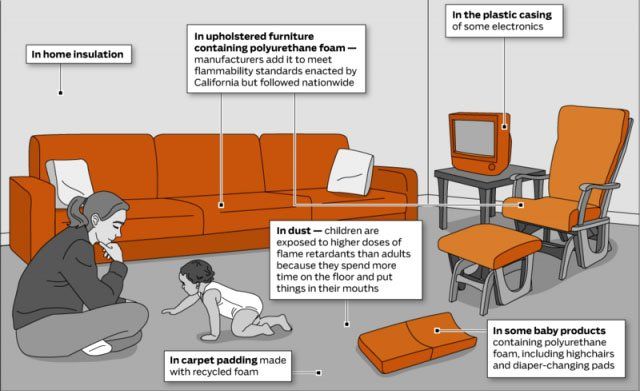 Flame retardants can be found throughout households. Image source: Ecohome

After release into the environment pollutants can be taken up by animals and plants. They have also been detected in human tissues such as the blood and the brain. Environmental chemicals have even been detected in breast milk in some of the most remote parts of the planet (eg the Faroe Islands).

The source of chemicals taken up are many and varied and include food and food containers, drugs and supplements, water, indoor and outdoor air, smoking/vaping, surgery/prosthesis/dental, cosmetics, soaps and other detergents etc. A major source of chemical exposure for many people is occupation and there is considerable evidence that workplace chemicals can cause disease.

There are mechanisms in our bodies for detoxifying and eliminating chemical pollutants. One particular protein, cytochrome P450 plays an important role but there is increasing evidence that there are slight differences in the genes for this protein (and many other proteins), referred to as polymorphisms, and it is likely that these differences probably affect the efficiency of detoxification
and excretion of many pollutants.

A key question is whether exposure to the very small amounts of apparently non-toxic doses of the great number of chemical pollutants released into the environment from the many different sources is affecting our health and well being. To determine whether our exposure to the small amounts of individual pollutants can cause disease we have relied on animal studies to assess likely toxicity. 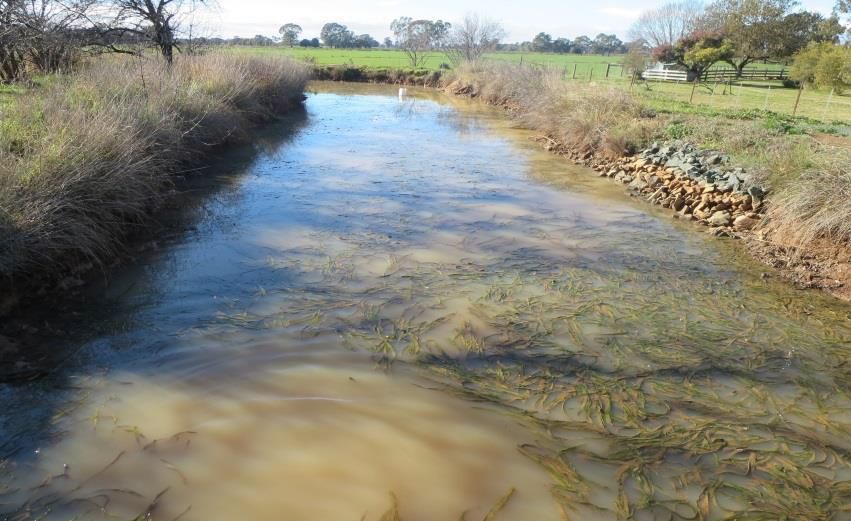 Channel 7/12/9 which supplies the small Victorian community of Girgarre with drinking water. Goulburn Valley Water detected the herbicide 2,4-D for a period of 4 months in 2010 near the offtake to the town water supply. The average detection of 2,4-D over this time was 6.6% of the Australian drinking water guideline, with the highest level being 4ug/L or 13.3% of the guideline level. Only levels 30ug/L (Australian drinking water guideline) and higher have to be reported to the Health Department. Local residents therefore would not have been informed of the incident.

Unfortunately these studies rarely take into account the fact that human exposure to a pollutant can take place over long periods of time – even years. Certainly the number of diseases, including for example cancer, respiratory and skin diseases, that are caused by gradual occupational exposure to non toxic amounts of different workplace chemicals is an indication that long term chemical
exposure is potentially harmful.

In addition, toxicology studies carried out on animals rarely take into account potential synergistic effects of chemical mixtures. That is when the combined activities of different chemicals produce effects greater than that predictable from a knowledge of the effects of each individual chemical. Before approval for the use of a particular chemical is given these factors should be taken into account.

Finally, as it has been shown repeatedly that chemically stable substances, such as for example DDT, fluorocarbons and polychlorinated biphenyls break down very slowly and can accumulate in the tissues of animals and even humans, this should be considered before approval is given for their use.

Professor Alfred Poulos is a biochemist who has a PhD from London University and a law degree from Adelaide University. He has just had his book 'The Secret Life of Chemicals' published internationally by Springer.

Friends of the Earth has a number of research projects involving toxic chemicals. Some of the information has been collated on the following maps: Australian Pesticide Map, Australian PFAS Map and Australian Drinking Water Map.