Across the state, people worked tirelessly for the Gasfield Free campaign and it was truly a win for people power. All walks of life came together to protect our land, water and health. We fought to protect what we have for future generations, and made democracy work for us.

As we continue to reflect on all the hard work, joys and tribulations over those 5 years, we know that the fracking ban will be one of  the greatest campaigns and wins for the environmental and community movement.

Here’s a few flashbacks of our favourite #VicGasBan moments: 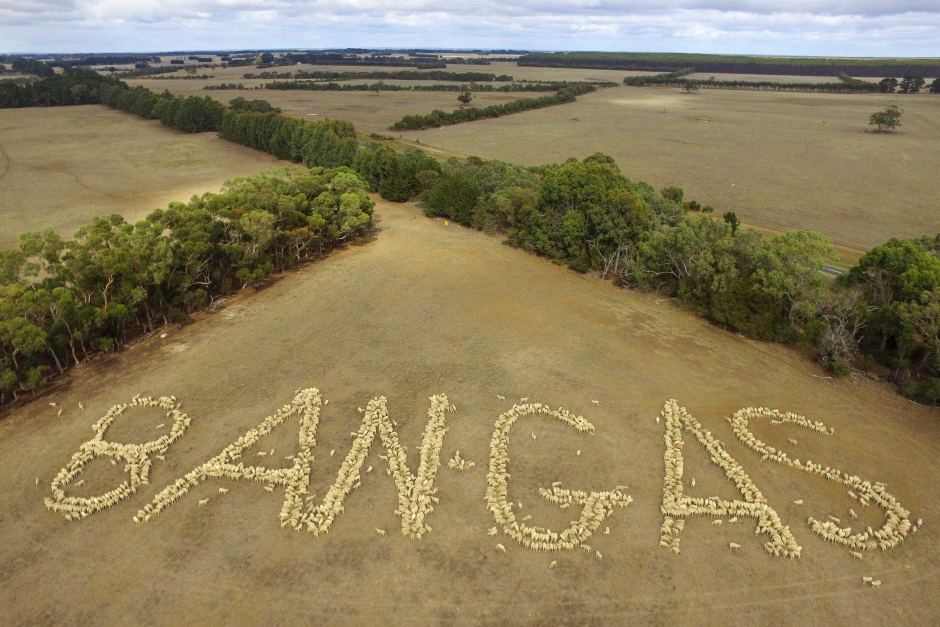 We were never short of creative ideas! Fighting hard for 5 years meant we had to keep things interesting. We had ute signs, people signs and our forever favourite the giant 'Ban Gas' sign with the help of almost 2,000 sheep. Farmers from Branxholme, Byaduk and Wallacedale supported the event in Feb 2016, with a drone capturing the image from the air. As of early March, the video had been viewed more than 150,000 times.

2. When we self-declared Victoria Gasfield-free 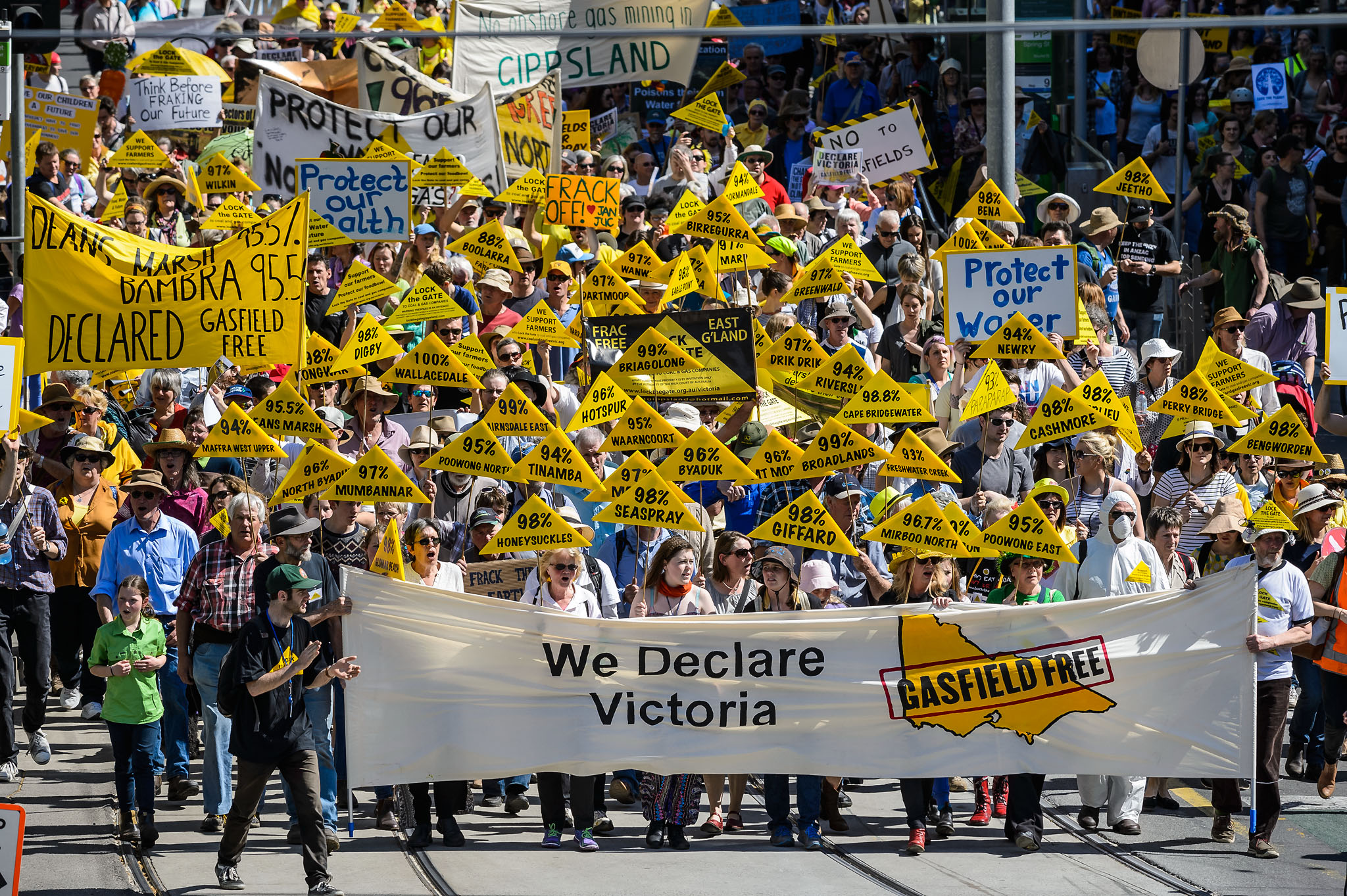 In 2015, 2,000 farmers and community members, from as far as Portland in the Western Districts and Seaspray in East Gippsland, united to declare that gasfields will never be welcome in Victoria. The crowd included representatives of 67 Victorian communities who have declared themselves ‘Gasfield Free’. A 50 metre declaration scroll was unfurled, and was later signed by hundreds of rural and urban rally attendees. Seaspray farmer Trevor Flint told the crowd "If the government lets gasfields into Victoria, we’ll pick up where Bentley left off".

3. When four farmers traveled to Darwin to stand in solidarity with other states 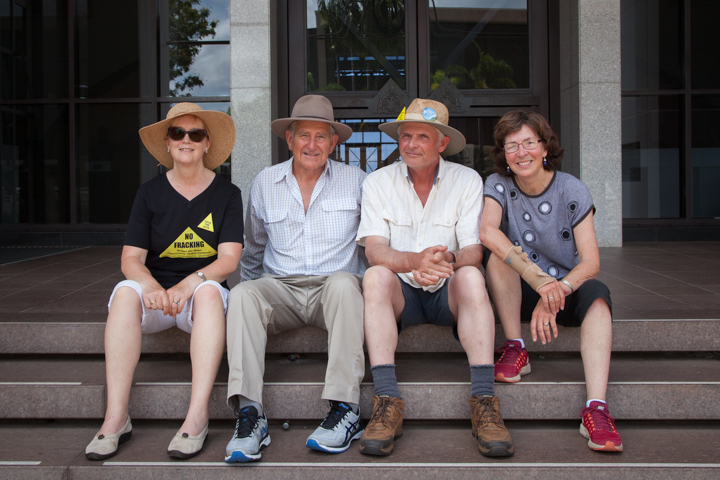 As Victorians who continue to feel the relief from our win, we know we haven’t fully won until we have a frack free Australia. In a gesture of support and solidarity, last November four farmers traveled over 3000 kms from Victoria to Darwin to rally and stand with communities that are next in line in fighting for land rights, clean water and a safe climate. Through showing other states that our concerns go beyond our own backyards we hope to inspire them to fight the fracking industry twice as hard!

We will continue to lend our support to those in other states fighting against fracking and onshore gas across the country. Every state other than Victoria faces an ongoing threat from unconventional gas exploration and production licenses, threatening our water sources, farmland and the integrity of communities.  We look forward to more states following Victoria’s lead, by becoming officially Gasfield Free.

So where does the ban stand now, with a state election in November?

While the Liberal Party promise there will be no fracking under their watch, they have made it clear they want to lift the moratorium on on all onshore drilling if elected (this comes a good 18 months before the Independent Scientific Committee release their findings and despite the fact that the same committee has found only 6 months worth of gas in the south-west). We worry any drilling will be a foot in the door for fracking in the future.

Meanwhile Resources Minister and Treasurer Tim Pallas has stood strong by the onshore gas ban in the face of pressure from the federal government, both at COAG and in the media.  But despite understanding that no amount of gas mined from Victoria will bring down export driven prices, he released licenses for exploration of gas off the south-west coast, which may require onshore to offshore drilling technology for extraction.

Any gas development, onshore or offshore, jeopardises our chances of tackling climate change.  Methane is a potent greenhouse gas, not a bridging fuel. We need both parties to back renewable energy for the future so we can rest easy that fracking won't be forced on our communities again.

So the fight is not over. With political parties more regularly positioning themselves to block the will of communities, we need your support to continue to combat the threats to land, water and climate in Victoria.

Can you donate to Friends of the Earth today, and support our grassroots campaigns?

We encourage you to email Daniel Andrews, Tim Pallas and your local Labor candidate (or get on their Facebook page) to thank them for the #VicGasBan, but let them know that any onshore gas drilling isn't welcome in our state.

And while you're there, tell your local coalition member they must stand by the unconventional gas ban AND the onshore drilling moratorium. According to the experts there is no commercial gas supply underground that could be accessed by conventional methods, and communities don't need a fracking headache down the track.