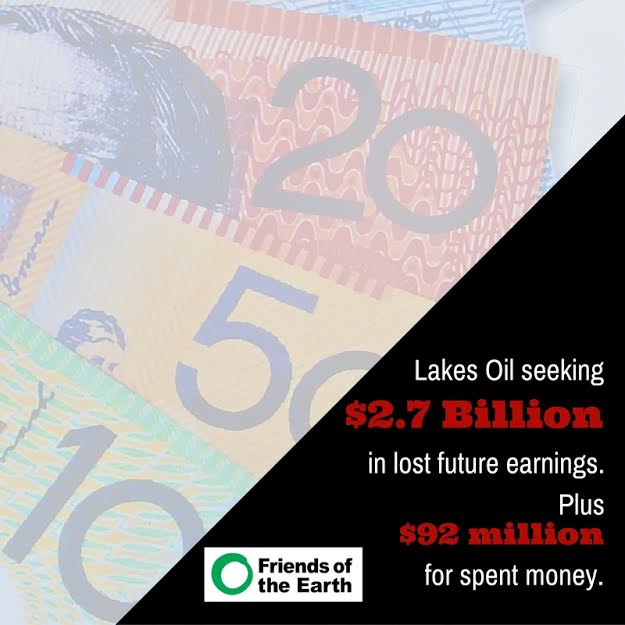 Lakes Oil is seeking $2.7 billion in damages from the Victorian Government after the state moved to ban fracking. It claims that the permanent ban on unconventional gas drilling is "unlawful". The company has filed a writ in the Supreme Court.

Lakes Oil is part owned by Gina Rinehart's Hancock Prospecting. It has previously explored for gas in Gippsland and western Victoria and carried out fracking operations in Gippsland.

“This company alienated large sections of the local community in the way it handled concerns about fracking” said Friends of the Earth co-ordinator Cam Walker. “They are involved in a business which is based on high risk investment, with no certainty of generating a profit. By definition, ‘exploration activity’ carries the risk that it will not lead to commercialisation of the resource.”

“Now they expect the tax payer to foot the bill for their bad business decisions.”

Lakes Oil have indicated that their Court case may be ‘crowd funded’ from shareholders. “The ban is hated by the gas industry and has been denounced by the federal Energy Minister. The company is connected with Australia’s richest woman. It will be interesting to see if they declare exactly who is funding the case. Having alienated the community, they are unwilling to walk away and accept the outcome of a democratic process” said Ursula Alquier, community campaigner with Friends of the Earth.

"Over 98% of our community rejected Lakes Oil and their plans for gas fields in Seaspray” said Seaspray Dairy Farmer Julie Boulton. “We have been crystal clear for a long time that they will never be welcome here. To think they want compensation is just startling, they still haven't even attempted to clean up the mess they have left behind in Seaspray, including old gas wells and leaking evaporation ponds”.

“They have had a huge impact on our community just for the sake of greed. We are so grateful to the Andrews government for sticking up for communities like ours right across the state and we look forward to this insane legal action being thrown out" said Ms Boulton.