Fracking the Planet with the TPP 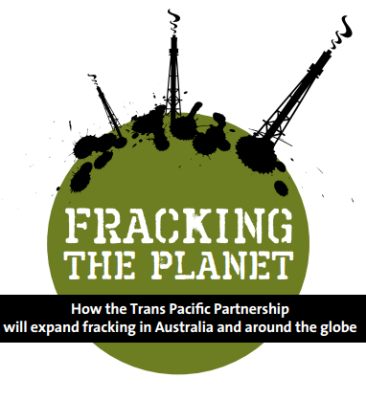 As Trade Ministers meet in Hawaii to continue the secret negotiations of the Trans Pacific Partnership (TPP), Friends of the Earth Melbourne’s Economic Justice Collective have released a paper titled ‘Fracking the Planet: How the Trans Pacific Partnership will expand fracking in Australia and around the globe’. This paper explains the implications of the Investment State Dispute Settlement (ISDS) Chapter of the TPP, and explores the ways in which foreign corporations could use this clause to override the Australian law and environmental regulations to continue fracking the planet.

The authors of this paper are concerned that the inclusion of the ISDS clause in the TPP will provide foreign fossil fuel corporations, such as Shenhua, Idemitsu or Chevron with an avenue by which to sue the Australian Government for instituting legislation designed to protect the natural environment, human health and agricultural land. The ISDS clause may also have a chilling effect on public policy and regulations in relation to repealing coal mine licenses, or even adhering to food safety regulations and environmental protection standards.

Fracking the Planet paper also explains the basic process of fracking, and presents the current state of play across Australia, the US and Europe, including areas currently engaging in fracking, bans and moratoriums, and areas of community resistance. The TPP is the largest trade deal in history and will impact over 800 million people and 40% of the global economy. The TPP is being negotiated in secret, between government representatives and over six hundred corporate insiders who have full access to the TPP text. Citizens across the twelve participating Pacific Rim nations are calling on their governments to act transparently and release the TPP text, reject the Investor State Dispute Settlement (ISDS) Chapter or withdraw their countries from the negotiations.

FoE's Economic justice collective explains the paper provides examples of recent ISDS cases (of which there are currently over 600 known cases), including Philip Morris’s legal case against the Australian Government in response to the plain packaging laws, which was made possible by the Hong-Kong Australia Bilateral Treaty. The Economic Justice Collective believes it is time for public and parliamentary scrutiny of the TPP when serious issues of worker’s rights, public health, environmental protection and our sovereignty are at stake. Minister Robb needs to acknowledge community and union concerns are well founded around this secret deal and act in Australia's interest, not corporate interests.

Friends of the Earth along with millions of union members are calling on the Government to put workers rights,  human rights and environmental protection before corporate profit.  If this deal is so great for Australia then the Government has nothing to hide and should immediately release the text for public debate and independent review or withdraw from the secret negotiations

Download ‘Fracking the Planet: How the Trans Pacific Partnership will expand fracking in Australia and around the globe’.