Day of Action - Public Transport and the Upcoming Budget

This week, Sustainable Cities organised a day of action on Monday the 23rd April. With only one week left until the release of the budget, it is vital that we let our MP's know what their citizens want. The City of Melbourne needs to be easily accessible by all, not just those who drive. The budget should reflect these needs by investing in a healthy, walkable, easy-to-get-around city. Increasing funding for public transport, infrastructure for walking and biking, and moving our freight onto rail lines are all ways to do this. 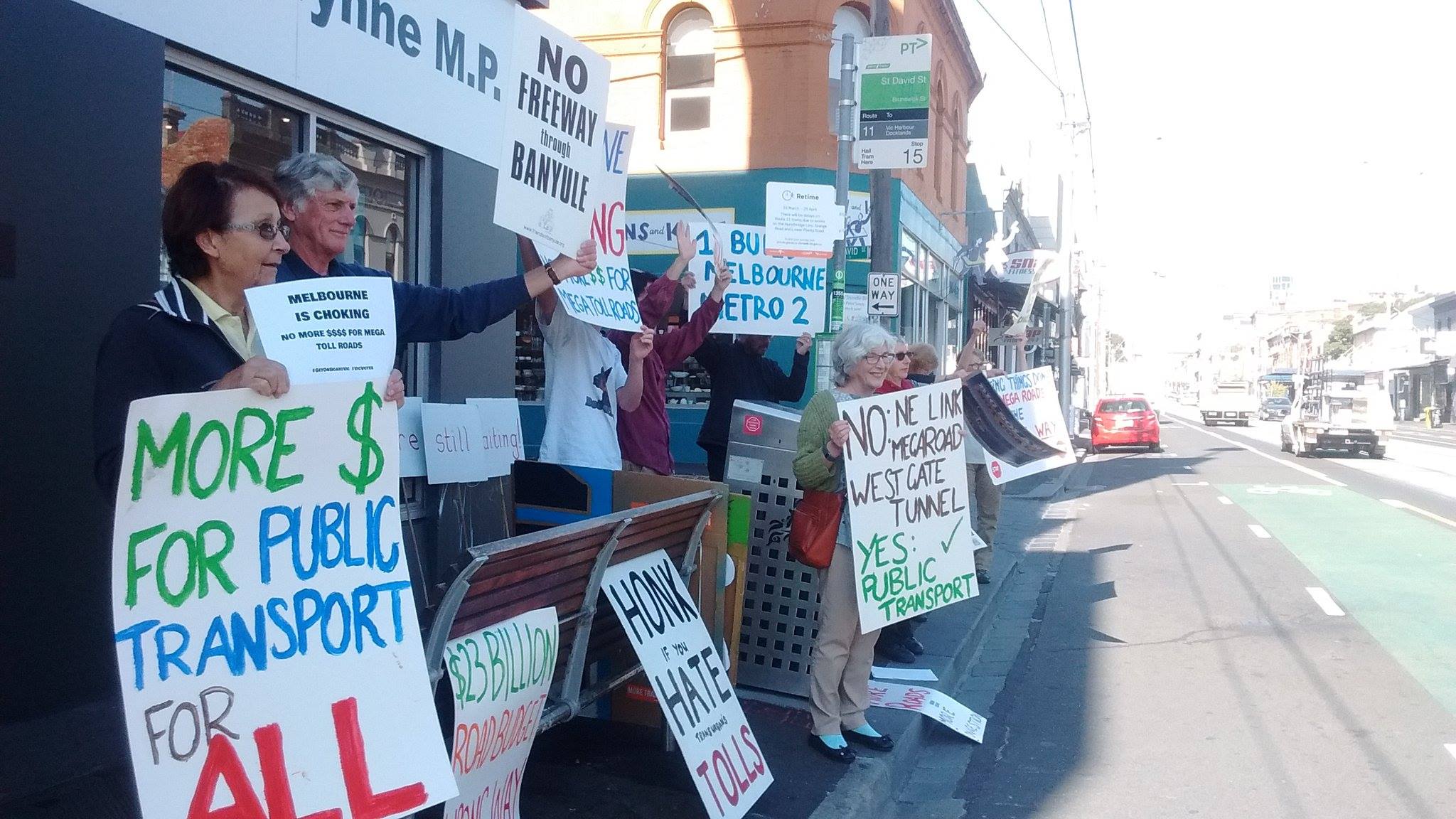 The day of action took place in all corners of the city. At 10 am, locals took action at MP Wade Noonan's office in Williamstown. Though the West-Gate tunnel will run through the backyards of neighbouring residents, Noonan has yet to comment on it. The tunnel will increase the number of cars in the West and North sides of the city by thousands. Many local residents voiced their support for public transport and tooted their displeasure at tolls.
In Mordialloc, local MP Tim Richardson was visited by over a dozen locals all passionate about mega road issues. The Mordialloc Highway project is a source of great environmental destruction. It will affect wetlands, bird patterns, and the green wedge. The highway is being built in the interest of reducing road congestion. Many people in Mordialloc have no option but to drive, but introducing more roads will only add to congestion. MP Richardson came out of his office to chat with locals during the action. It is so important to communicate with our leaders the other options that are available to reduce congestion. With an increasing population, all Melbourne suburbs will need greater public transport options.
A dozen North-Eastern suburb locals gathered outside of Ivanhoe MP Anthony Carbines' office. The North-East link, Victoria's biggest ever proposed road work, weighs on everybody's minds here. Not only will this link increase congestion and lock more people into car-dependent lifestyles, it will also have mass environmental impacts. The Yarra River and its tributaries, groundwater flows, state and national parkland, and sports fields will all be affected. Health is also at risk, with increased pollution from more cars and trucks on our roads.
At 11 am, locals came to enthusiastically protest against mega road plans at the office of Planning Minister and Richmond MP Richard Wynne. Decades of hard work to reduce cars in the inner city will be reversed with the North East Link widening of the Eastern Freeway. Locals know that we need real sustainable transport solutions, in place of more car lanes. The media stopped by to learn about sustainable transport and it's importance in the upcoming election.
MP's Jane Garrett of Brunswick and Tim Pallas of Werribee were also phoned and visited by local residents, keen to know what the upcoming budget holds. Will Melbourne be doomed with more roads, traffic and pollution? Or will it finally see planning, construction and service improvements for sustainable transport? The whole city holds it's breath until we find out next week.
#GetOnBoard and join us here on facebook.
Share
Transport