Community "Rally 'Round Our Dunes" to highlight climate impacts in Inverloch 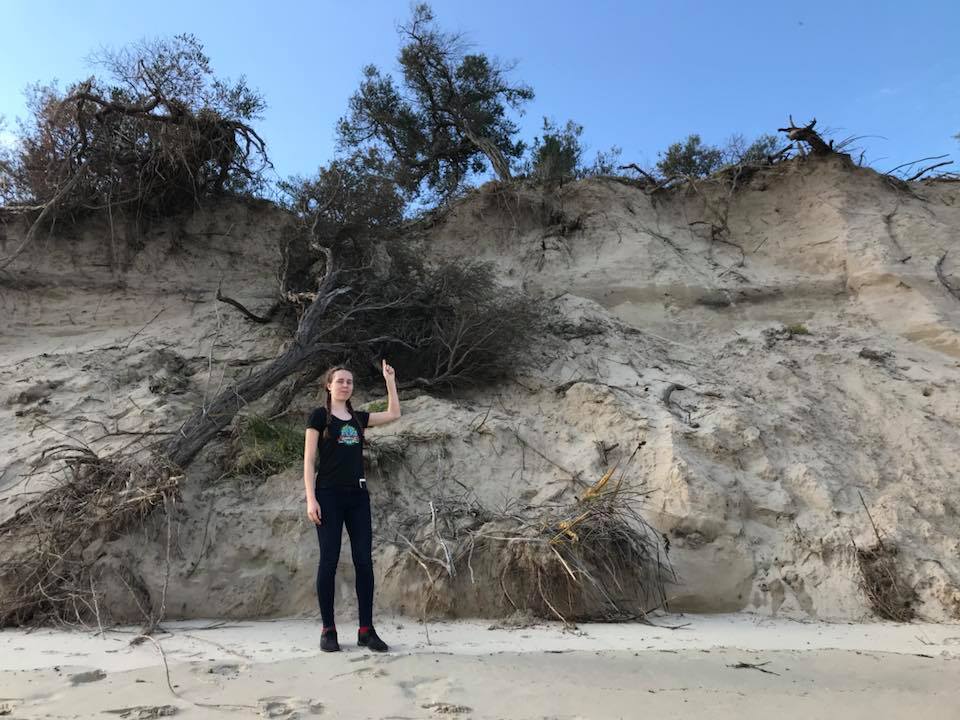 The Bass Coast community has been sounding the alarm about climate impacts on the coast for over a decade. The region has observed significant coastal erosion from rising sea levels and intensifying storm surges.
This community-driven advocacy helped secure emergency funding from the Andrews government in the wake of storm surges in October 2019 and May 2020—the latter event almost undermined the Bunurong Road connecting Inverloch and Cape Paterson.

Due to the slow pace of climate action from governments around the globe, coastal communities can expect at least 1.1 metres of sea-level rise by 2100. Sadly, that means Inverloch and other coastal communities will continue to see damage to infrastructure and ecosystems.

The South Gippsland Conservation Society has not given up hope. The group has organised a community rally, Rally 'Round Our Dunes, to encourage authorities to address the issue.

Act on Climate caught up with Philip Heath, President of the South Gippsland Conservation Society, to find out more about the issue and upcoming event.

Citizen science conducted by the South Gippsland Conservation Society, Aileen Vening, and others has put the issue on the radar of VictorianMinister for Climate Change Lily D'Ambrosio and led to coverage from The Age and ABC News.

Act on Climate: For people living in Melbourne or further afield, can you tell us, how has Inverloch's coast changed over the last decade?

Philip Heath: Up to 70 metres of the vegetated dunes behind Inverloch Surf Beach have been swept away in the past nine years, the most rapid change recorded along the Victorian coastline in European historical times. Over 8 hectares of dune vegetation has been lost—almost half of the total area of vegetated dunes that existed behind the beach in 2012. The current shoreline position is at the most landward location recorded.

From being a wide, gently-sloping beach backed by more than 100 metres of vegetated dune, the surf beach is now much narrower, with little or no dry sand at high tide. It is strewn with fallen and dying vegetation, backed by a thin strip of steeply eroded dunes. The Wreck Creek estuarine lagoon system is under threat and 80-year-old Coast Banksias are being undermined and falling into the sea at Flat Rocks.

Studies conducted for our Inverloch Coastal Resilience Project highlight the significant ecological, geomorphological, Indigenous cultural heritage and economic values of the dunes, all of which are rapidly being lost. The dunes provide biodiverse habitat for threatened and vulnerable flora and fauna. The vegetation is also an important east-west biolink to the adjacent Yallock-Bulluk Marine and Coastal Park.

The vegetated dunes also create a natural setting for the surf beach, and are a significant factor in its popularity. Critically, the dunes provide a buffer for residences on Surf Parade and beyond. 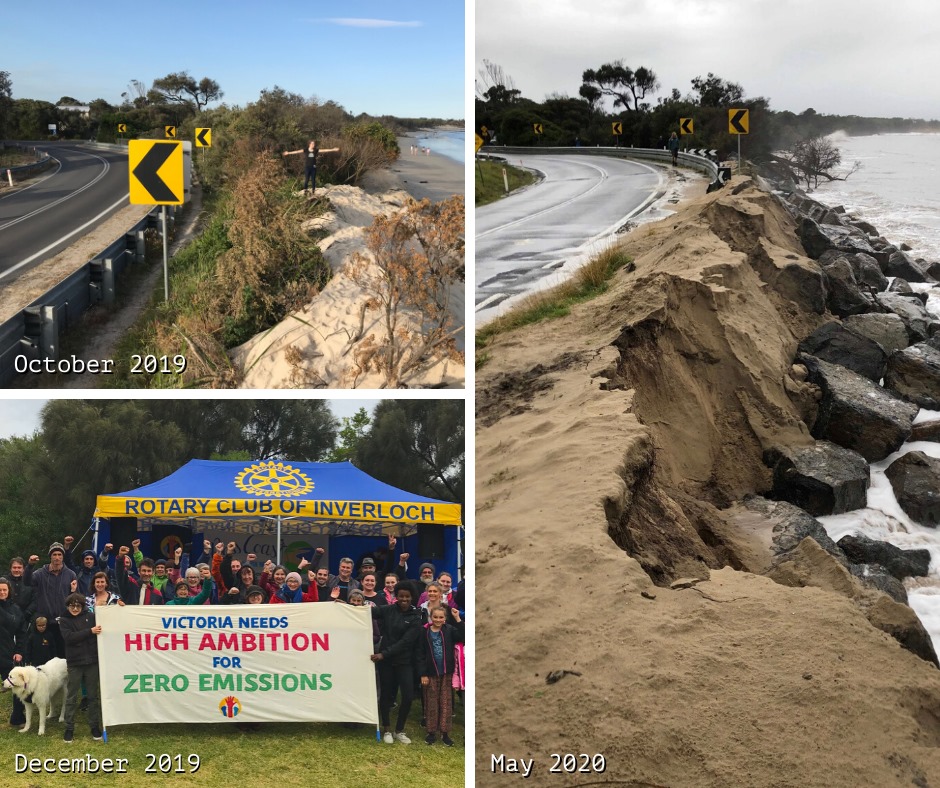 Act on Climate: What's causing the dramatic changes in Inverloch? Is there a climate change-dimension to what's occurring?

Philip Heath: Our research shows that the main contributing factors are increases in the frequency and intensity of erosion-inducing storms and bigger ocean swells, combined with rising sea levels.

Storms are now occurring so frequently that the dunes don’t have time to recover, as may have occurred previously. In addition, sand eroded from the surf beach has been pushed into Andersons Inlet, where it cannot provide surf beach replenishment.

These factors are very likely linked to climate change, which we expect will be confirmed by the current Victorian government Coastal Hazard Assessment, due to report in early 2022.

Urgent climate action to minimise future impacts is absolutely critical to saving our beaches not only on the Bass Coast, but around Australia and world-wide.

Act on Climate: What action would you like to see from the Victorian Government and its Agencies?

We were very pleased when Victorian Government funding was announced in October 2019 to address Inverloch Surf Beach erosion, with the initial focus on preparation of a Coastal Hazard Assessment to identify feasible management strategies.

Two years on, that study will not report until at least the end of March 2022. Meanwhile, the surf beach has eroded a further 10 metres since the announcement.

The delays highlight the need to implement a low-impact, nature-based, dune management program in early 2022, before the onset of the autumn and winter storm swells.

Our research indicates that a combination of dune renourishment, wet sand fencing and dune revegetation would be effective in ‘buying some time’ at the Wreck Creek and Flat Rocks sections of coastline, while the long-term adaptation plan is developed. This approach has been followed at other at-risk Victorian beaches, such as Apollo Bay.


Act on Climate: Why is it important for the community to support the Rally 'Round Our Dunes event? What's planned for the big day?

Philip Heath: The rally is an opportunity for Inverloch locals and visitors to come together to demonstrate how much they value Inverloch Surf Beach and its dunes.

After nine years of sustained coastline erosion, now is the time to highlight the need for additional funding for both short- and long-term action to protect remaining environmental and community values, and to minimise future impacts. If the remaining dunes are lost, we’ll most likely lose the beach as well. This would have a devastating impact on residents, visitors and the local economy, as well also the natural environment.

The Rally will kick-off with a short welcome beside the Surf Club at 10.30am, after which we will walk to the surf beach with banners and form a line marking the dune location in 2012, before the current erosion began. Media has been invited and the Rally will be filmed. The event will wrap up by 12.30pm.

Act on Climate: If you could send a message to the state and federal governments about the issue, what would it be? 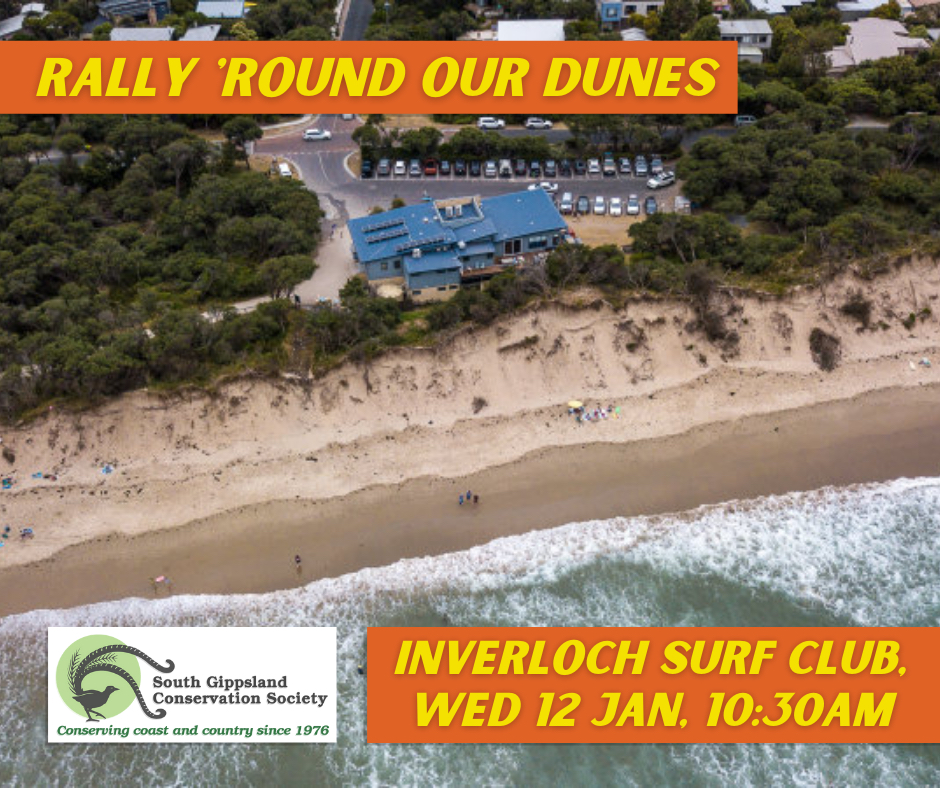 Philip Heath: The surf beach at Inverloch, the town’s greatest asset, is under serious threat. Additional funding is required to save the beach: firstly, to enable dune management works to proceed in early 2022; and secondly, to rapidly implement the long-term adaptation plan recommendations arising from the current Coastal Hazard Assessment.

These recommendations will need to seek to maintain remaining environmental and community values, and to minimise future climate change-induced effects.