Just a week after the state government announced a massive target to build 9 gigawatts of offshore wind by 2040, key energy experts, community and industry leaders fronted a Parliamentary Inquiry into how Victoria can reach 100% renewable energy over two days.

The hearings held on March 16-17 highlighted the opportunities to more rapidly transition Victoria’s energy supply to renewable energy over the next decade.

The impending closure of Victoria’s ageing coal fired power stations and the need to create alternative sources of employment for regions like the Latrobe Valley was front and centre.

This is now considered the most likely scenario by the majority of energy stakeholders. Dr McConnell pointed out that the impending closure of brown coal has big implications for the Latrobe Valley, and estimates this will require investing around $10 billion in new renewable energy and storage. 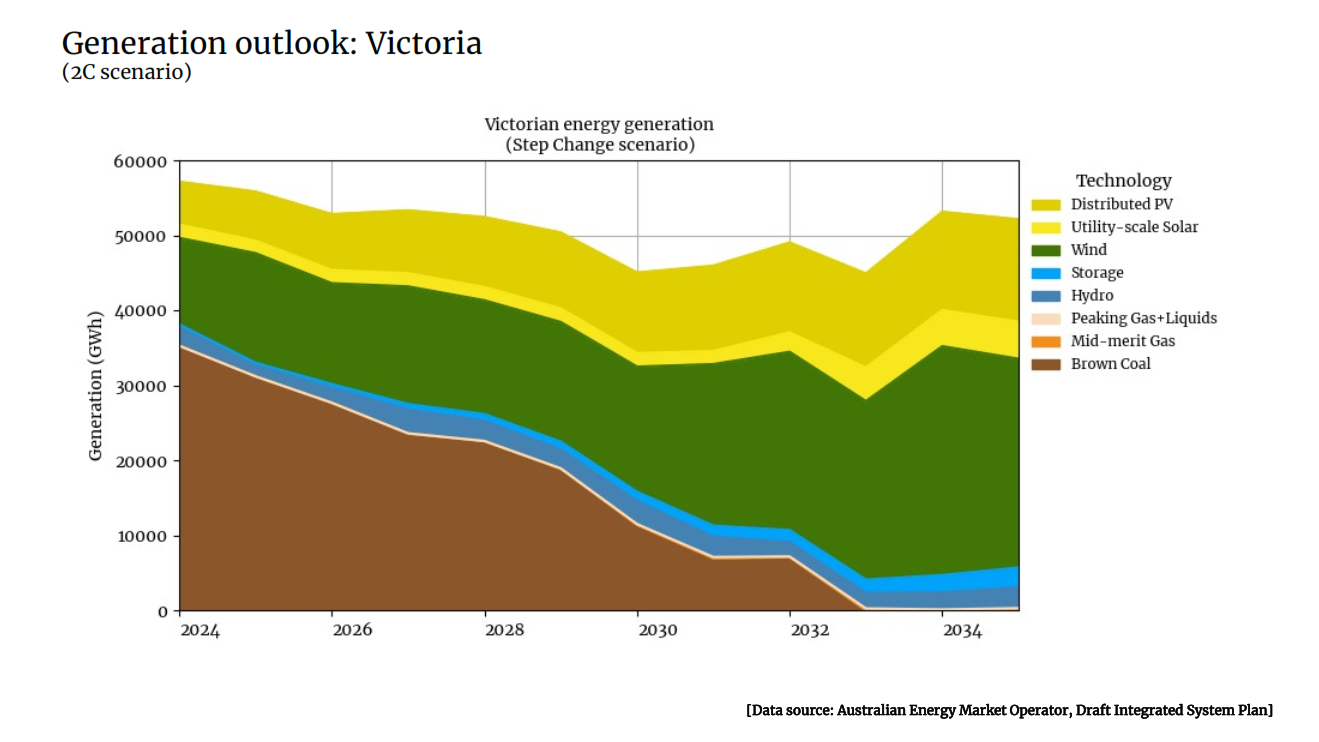 As the coal industry declines, Greg Foyster from Environment Victoria said its essential governments support communities like the Latrobe Valley through the transition. Foyster said funding the Latrobe Valley Authority until the last coal plant closure will give the community the certainty they need to plan their lives and careers.

And with Victoria aiming high on offshore wind, a whole new renewable energy industry will be developed over the next decade in Gippsland, creating a real economic pathway for workers in the coal, oil and gas industries.

During the inquiry, Victoria’s ambitious offshore wind target clearly frustrated fossil fuel lobby group, the Australian Energy Council (AEC)  which attacked the policy and warned Victoria against ‘going it alone’, as covered her in the Australian Financial Review. The AEC represents the owners of Australia’s polluting coal and gas generators and has long opposed state-led action on climate change.

Following questioning by Leader of the Victorian Greens Samantha Ratnam the AEC was unable to explain how it will assist workers in the coal and gas industries transition to new careers as the need to act on the climate crisis only becomes more urgent, or offer any useful recommendations to ensure Victoria will benefit from the transition.

Clearly the AEC doesn’t like the idea of coal and gas fired generators competing with a whole new source of renewable energy even if this will deliver the deep emissions cuts needed to prevent catastrophic climate impacts from getting worse.

The inquiry was also a chance to dig deeper into what’s needed to make sure the transition to renewable energy delivers for regional communities.

In 2020, the Victorian government announced it will create six new ‘Renewable Energy Zones’ throughout the state to coordinate investment in wind, solar and transmission infrastructure.

Tony said the state government has a good opportunity to communicate to the Victorian public about the need for the energy transformation, why Renewable Energy Zones have been planned and what they will mean for people who live in regions where renewable energy will be built. This could be modelled on the Latrobe Valley Authority.

The need to get Victoria off gas was also a major focus of the inquiry. According to Environment Victoria, gas represents 15% of Victoria’s total emissions, with a significant portion of this being burned for heating and cooking in homes and businesses and in industrial activities. 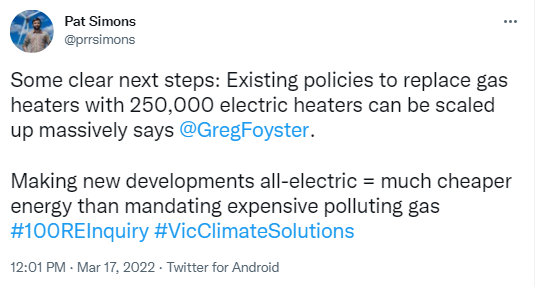 But there is a huge opportunity to scale up existing policies to electrify homes and businesses  – doing this would not only help cut pollution from gas it will also reduce power bills.

After launching a joint statement to get off gas alongside community allies earlier this year, Friends of the Earth is now writing a community roadmap for a gas-free Victoria.

With technology changing rapidly, and governments making significant new announcements on offshore wind, Victoria has a huge opportunity to accelerate the transition to renewable energy, create thousands of jobs, deliver cheaper power and act on the climate crisis.

Friends of the Earth will continue to track the inquiry into 100% Renewable Energy, and will be engaging with the state government and upper house MPs to make sure it delivers the outcomes we need for real action on climate change.

Sign up here for updates about our campaign for 100% Renewable Energy.