With time running out to influence the state government's decision on Victoria's climate targets, we've hit the ground running in 2021. And we'll keep up the fight until they're announced. 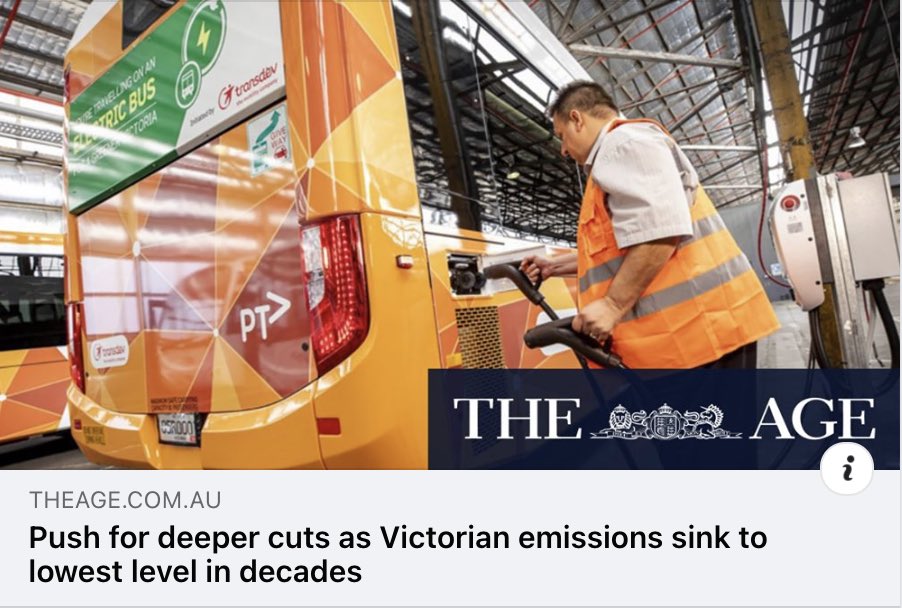 In mid-February, we secured prominent coverage in The Age to premiere University of Melbourne modelling on Victoria's climate targets.

The story revealed that the Victorian Labor government has beaten its Emissions Reduction Target of 20 percent (below 2005 levels) by 2020 with greenhouse gases falling to their lowest level in over 30 years.

The University of Melbourne's modelling, commissioned by Friends of the Earth, shows an emissions cut of 75 percent by 2030 is achievable and would create over 50,000 jobs. (You can find the report, here).

Friends of the Earth stress the need for the government to take a science-based approach to tackling the climate emergency, commit to a 1.5°C carbon budget, and link ambitious targets to the state's economic future. 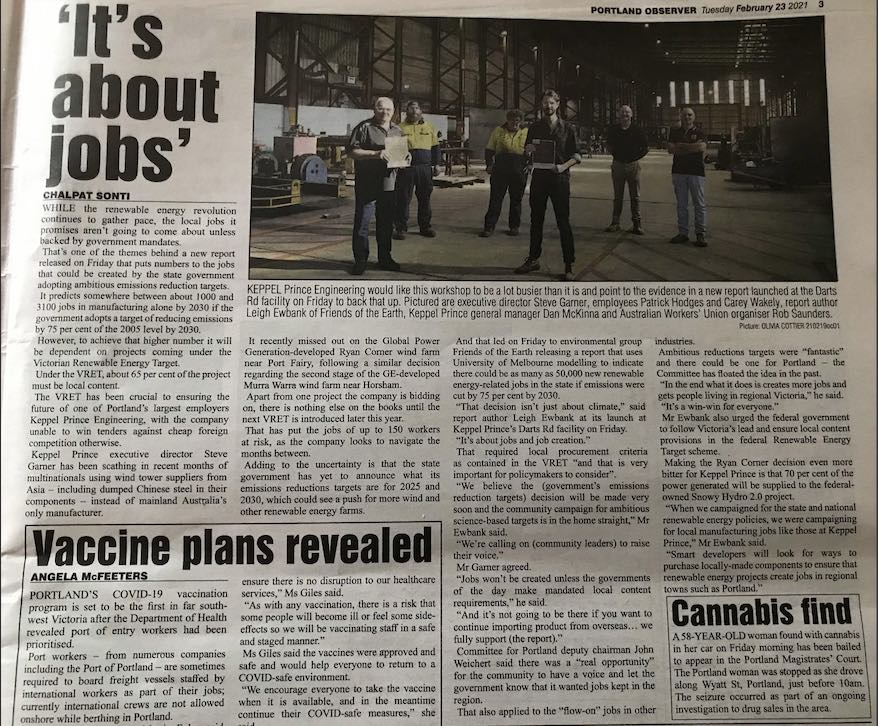 "It's about jobs." That was the headline of The Observer's coverage of the regional launch of our report at Australia's largest wind turbine tower maker, in Portland, southwest Victoria.

"The relationship between Friends of the Earth and Keppel Prince has always been about climate and jobs," said Garner, "and we look forward to that relationship strengthening even further into the future."

We're pleased to have the Keppel Prince wind workers backing our call for climate ambition at this critical moment in the campaign.

A commitment to deep emissions cuts will create a pipeline of work for the wind workers who are building our renewable energy future.

CLICK HERE to read our blog on the Portland launch. 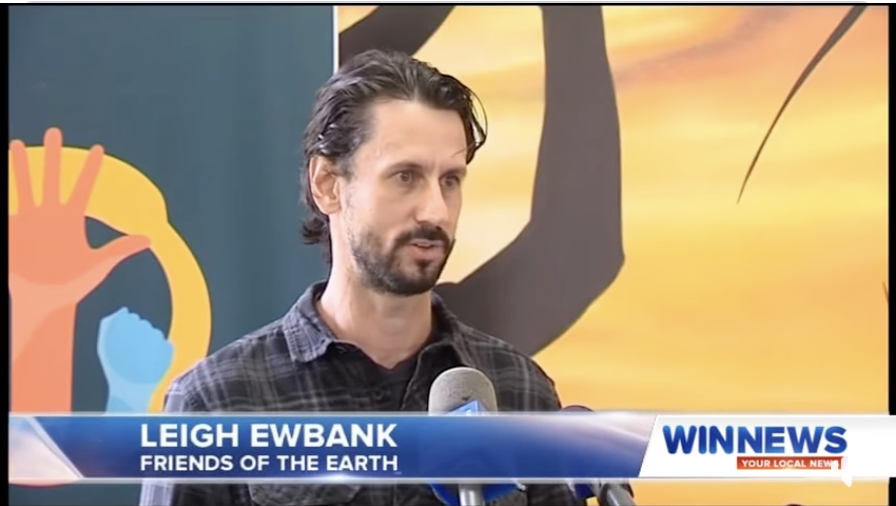 Offshore wind is emerging as a key technology for delivering deep emissions cuts in the United Kingdom and Europe.

We were pleased to hold a regional report launch at the Gippsland office of Australia's first proposed offshore wind farm, the Star of the South.

"Victoria's emissions have fallen 35 percent since 2011 and with the right policy settings that trajectory can continue," said Dr. McConnell.

"We weren't sure that Victoria could deliver reductions consistent with Paris Agreement commitments, but after this modelling exercise we're now confident the Andrews government can deliver science-based Emissions Reduction Targets." 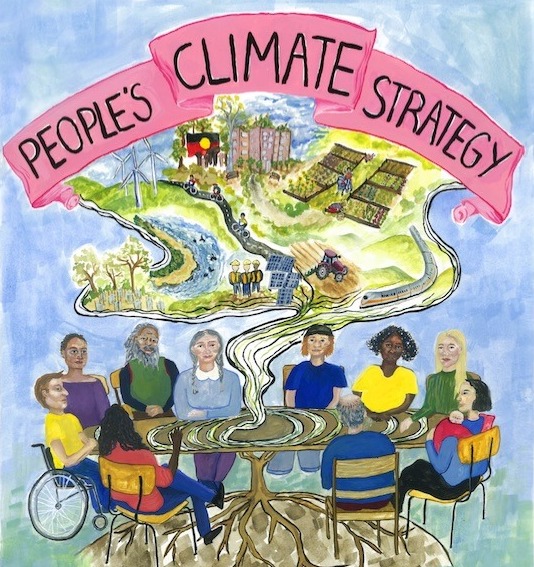 On Sunday 28 February, we passed another milestone in our People’s Climate Strategy for Victoria project... We closed the final participatory phase of the project with hundreds of people across the state voting for their top-priority Victorian climate solutions.

The solutions were all drawn from ideas contributed by community members in our Impacts and Solutions surveys last year, so this strategy is truly being shaped by community voices.

If you live along Victoria’s southwest or Gippsland coast, you may have spotted a beautiful ad designed by one of our collective members in your local paper. With rising sea levels already causing serious erosion, we wanted to tap into local knowledge about how to rein in emissions and respond to climate impacts.

Now it’s time for us to bring it all together and finish writing the report before we get to publishing, printing, and delivering it to members of parliament. Stay tuned for next steps. 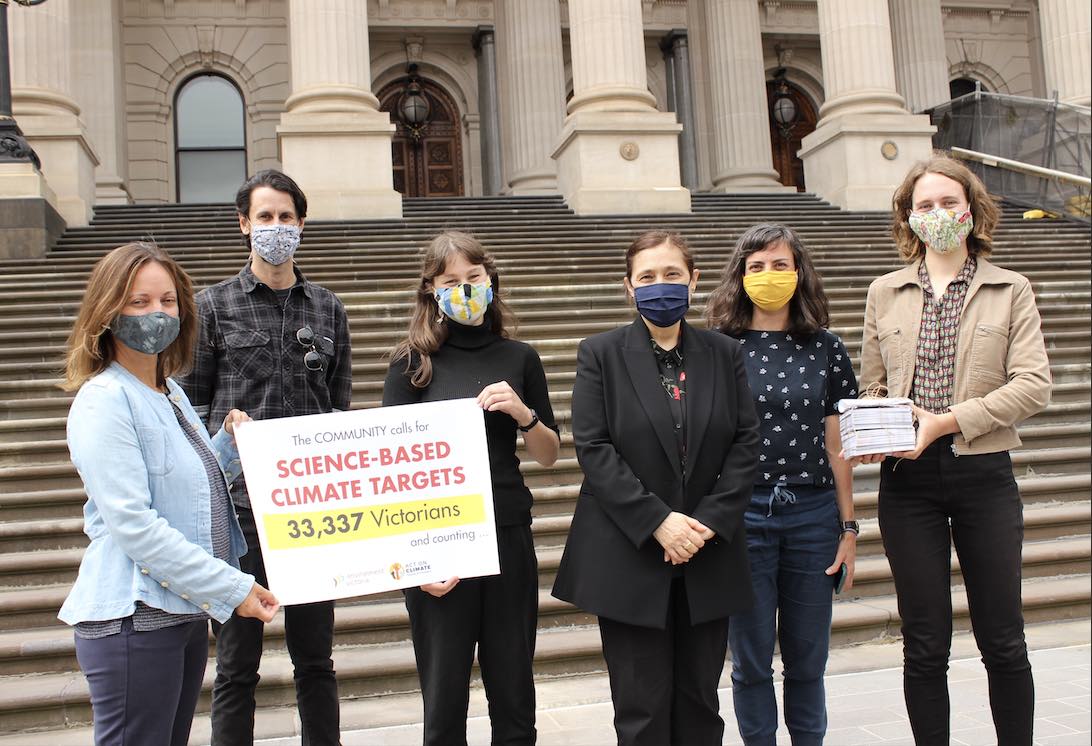 THE 33,000-STRONG CALL FOR SCIENCE-BASED TARGETS :

Friends of the Earth Melbourne and Environment Victoria have crunched the numbers... Over 33,000 community members have called for the Dan Andrews govt to set science-based Emissions Reduction Targets.

We delivered the final tally of signatures to Minister for Climate Lily D'Ambrosio on Tuesday 2 March. It'll be impossible for the Cabinet to deny the strong community support for climate leadership.

EMAIL THE PREMIER BEFORE IT'S TOO LATE: 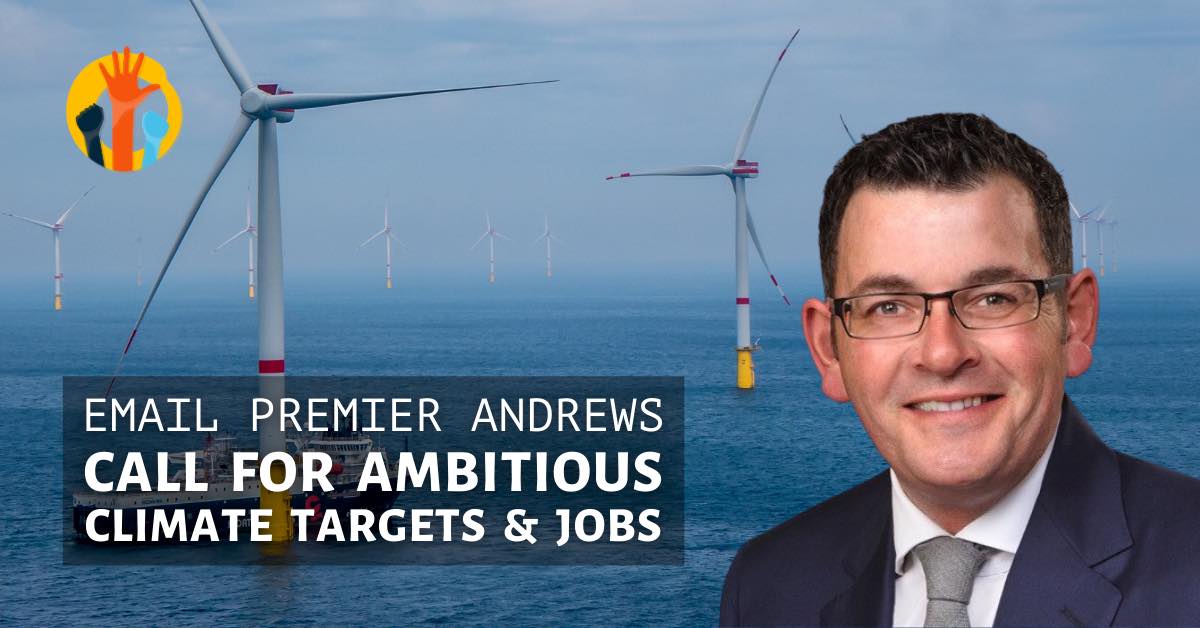 It's not too late to send Premier Dan Andrews a message ahead of his big decision on Victoria's Emissions Reduction Targets.

With the Federal government refusing to act, we need to see greater leadership from Victoria when it comes to tackling the climate crisis and creating climate jobs.

The achievement of ambitious climate targets can be the mission that drives Victoria’s economic recovery over the next decade. It would continue the rollout of renewables, see greater investment in Public Transport, and require greater protection of native forests.

EMAIL the Premier now to influence this critical decision.

There are plenty of informative online events coming up in March. We'd love to see you at the following (particularly the International Women's Day rally that will feature Friends of the Earth's Sam Castro):