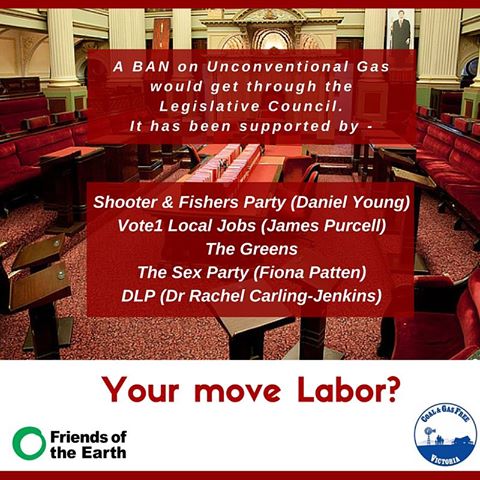 Gasfield Free groups across the state are anticipating the announcement by the Andrews Labor government in regards to onshore gas.

During the past year it has been made perfectly clear that communities will only accept a ban on unconventional gas drilling. Will the Premier and his team listen to the communities united stance?

"We don't want to be visiting this again in 5 years time. It has been a stressful time over the past 4 years and the opportunity has come for Labor to show real leadership and ban this industry outright', said Alison Marchant from Frack Free Moriac.

Gasfield Free communities have been proactive in visiting Upper House representatives and have gained the support of enough independents to get legislation enacting the Ban through the Upper House. They include Daniel Young (Shooters & Fishers Party), James Purcell (Vote 1 Local Jobs), Fiona Patten (Sex Party), The Greens and Dr Rachel Carling-Jenkins (DLP).

Western Victorian MLC, James Purcell said, ‘It is imperative, particularly for rural Victoria, that the state government make a permanent ban on unconventional gas for the state’.

So if Premier Daniel Andrews and Labor stand with communities and introduce a ban he knows he has the Legislative Council support.

“A previous ALP government banned the mining and production of uranium in our state. This was the right decision then and has served our state well over the years. We urge the premier to follow the lead of his predecessor and place a permanent ban on all onshore gas drilling. It will be well received by regional Victoria and all Victorians who understand the need to avoid producing greenhouse pollution from new power sources.” stated Cam Walker from Friends of the Earth.