On 6th April 2022 our Gippsland campaigner Wendy Farmer joined a tour of the region by the offshore wind project's Community Advisory Group.

The group represents people from across Gippsland who have continued to work with the Star of the South team and surrounding communities. We toured the Port Welshpool area, known as the windiest place in Victoria, McLoughlins Beach, Reeves Beach and Giffard West allowing the group to take in the area surrounding the offshore wind farm, where project infrastructure would be located including proposed transmission lines.

We also visited the Nooramunga Marine and Coastal Park, an intricate network of waterways and islands, framed by the majesty of Wilsons Promontory. The park consists of shallow marine waters, isolated granite islands, intertidal mudflats and a complex of over 40 sand barrier islands. The wind farm itself will be built further out at sea, 7-25 kilometres east of the Gippsland South coastline. You can find more information about the location of the wind farm here at the Star of the South project website.

It was an extremely windy day and we could all see why the area would be perfect for wind turbines. 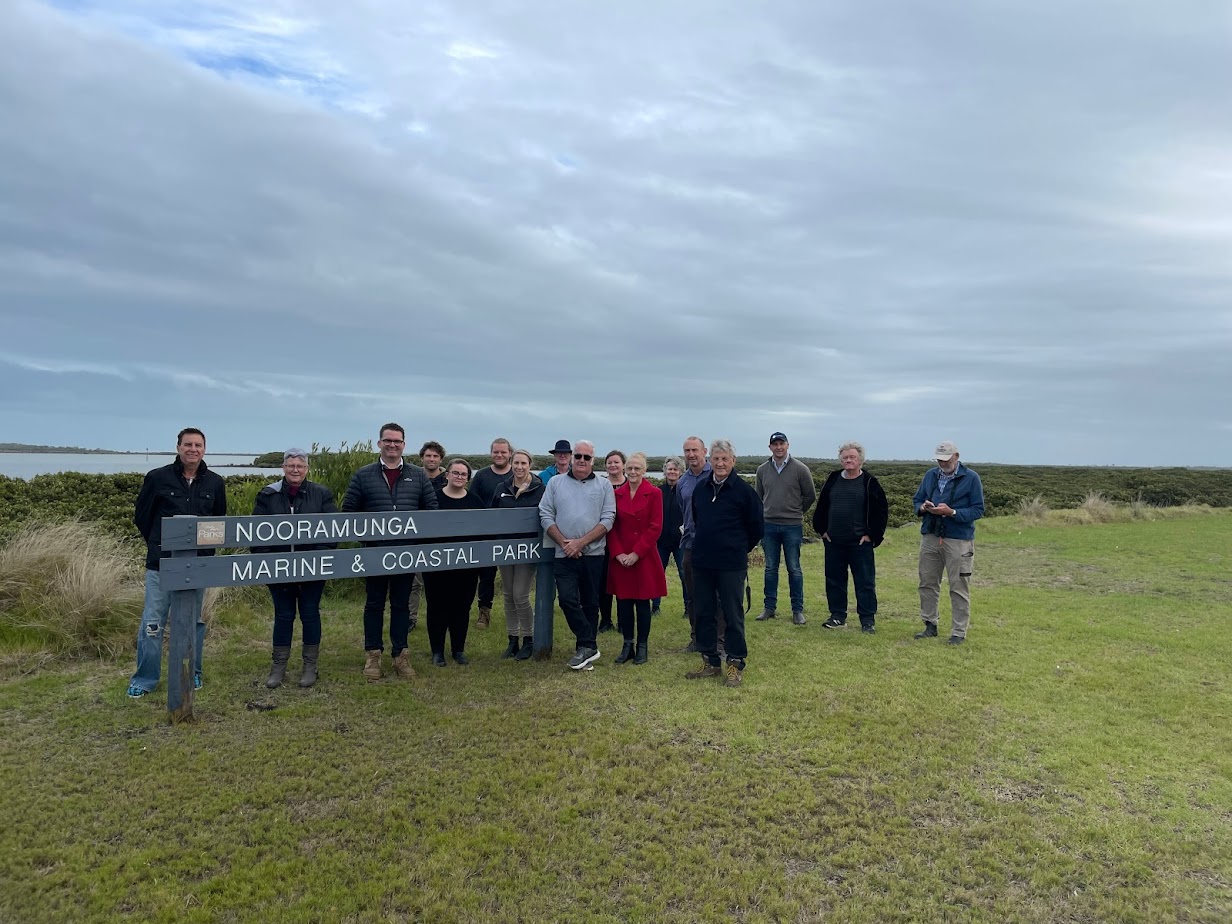 Image: McLoughlins Beach (Nooramunga Marine & Coastal Park) -  Allan Rogers standing front of sign is a McLoughlins Beach resident and sits on the Community Advisory Group, his house is the closest to the beach area. Allan has been proactive on working with the Star of the South developers to ensure good outcomes for his community.

The day was a good opportunity to meet with locals who are excited about the project -- it's clearly capturing the imagination of the Gippsland people who are looking forward to the benefits and opportunities that will come from the off shore wind farm, including new careers and tourism. Speaking with locals at Port Albert, one community member said “This project is exciting, I hope that we will see our town booming again with the pub and stores reopened”.

We had first hand experience of the new interactive equipment situated at the Star of the South office in Yarram, giving us the opportunity to see the project in simulation.

The offshore wind proposal is currently being assessed under the Environment Protection and Biodiversity act at the federal level, and undergoing an Environmental Effects Statement at the state level. Given the size and complexity of the project, these processes will be critical to making sure the design of the offshore wind farm minimises any potential ecological impacts to marine and terrestrial ecosystems.

Gippsland has also recently been named Australia's first priority area for establishing offshore wind, with consultation on declaring an Offshore Wind Area in Commonwealth Waters east of the Gippsland coastline expected to begin in early June, 2022. This will be an important opportunity for community members to shape the future of the offshore wind industry in Gippsland and make sure it delivers for the community and environment. Friends of the Earth will be closely following the consultation.

While many studies are still continuing, if approved Star of the South will become Australia’s first offshore wind farm, and is predicted to start delivering power to the grid for the first time in 2028.

Once the Star of the South if fully operational, the epic 2.2 gigawatt offshore wind farm will be capable of powering around 1.2 million homes with clean renewable energy.

If you are visiting the area, you can drop by the Star of the South project office in Yarram to learn more about the proposal. We're excited to see it become a reality. 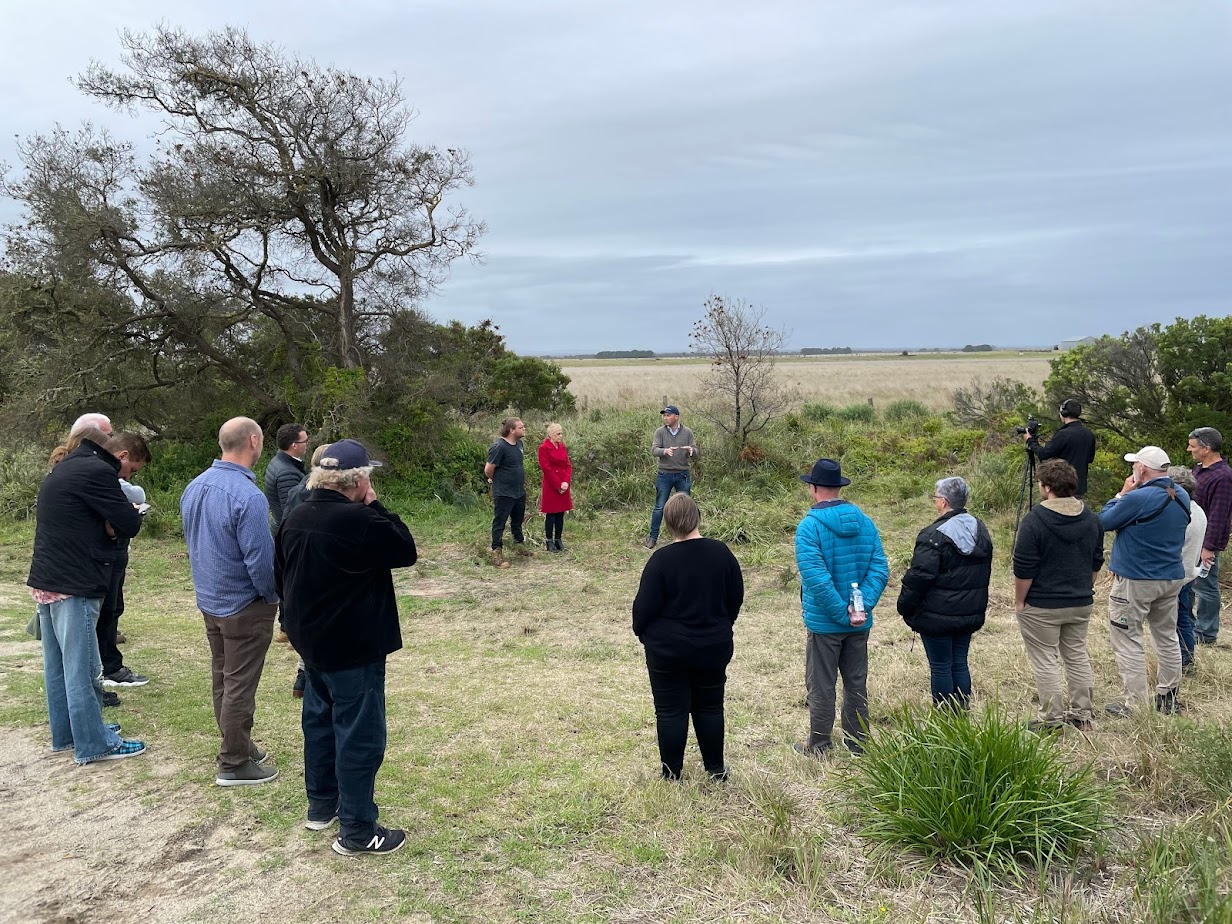 Image: Reeves Beach, Community Advisory Group listening to Engineer about the importance of shore crossing construction and protecting of the area.

Wendy Farmer is Friends of the Earth's Yes2Renewables Campaigner in Gippsland. Wendy is also President of community organisation Voices of the Valley, and sits on the community reference group for the Star of the South offshore wind farm.