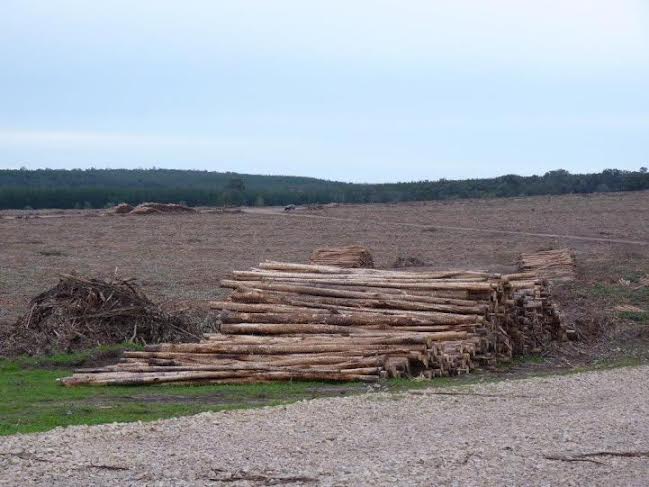 Environmental organisation Friends of the Earth has raised concerns regarding the logging and sale of plantation land in the Fernbank region of East Gippsland.

The bluegum plantations were established between 2005 and 2009 by Macquarie Bank in conjunction with Midway Plantations. The plantations were planted largely to meet the demands of a new Bleached Pulp Facility at Maryvale.

During the process to get the Facility approved, it was claimed that it would be sourcing its fibre needs from 20,000 ha of new hardwood plantations that were to be planted between 2005 and 2019 in the Gippsland region. A “temporary” increase in access to native forests was granted in 2005, as an interim solution to the plantation supply shortfall.

It was also clear that the bluegum plantations that had been planted were not growing as well as they had been advertised. “In 2007 Hancock Victorian Plantations bulldozed 250 ha of hardwood near Briagalong due to poor growth, yet the new Macquarie Plantations were planted only a few kilometres from the failed site. They were doomed from the start” said Anthony Amis from Friends of the Earth.

“Friends of the Earth also has concerns that the Macquarie Plantations that are now being logged, are not ending up in Maryvale, but are being transported to Geelong and exported. The land where the plantations once stood is also being sold. There are also concerns that the land could be sold to interests involved in the mining of mineral sands in East Gippsland” Mr Amis added.

The end result is that the Bleached Pulp Facility at Maryvale will not be plantation driven as planned, but instead may further entrench Maryvale in the logging of native forests.

Maryvale Pulp Mill is guaranteed 350,000 cubic metres of native forest hardwood each year until 2030 under the 1996 Wood Pulp Agreement.  The new Bleached Pulp Facility requires 200,000 cubic metres of hardwood per year. If this supply is not coming from plantations it will most likely come from native forests of the Central Highlands – meaning a 57% increase in the amount of native forest entering Maryvale, above what is legally guaranteed under the Wood Pulp Agreement.