Working for Water Justice in the Murray-Darling Basin

The Barmah-Millewa Collective has been working closely with Indigenous and environmental organisations to push for a fundamental reform in water management: recognition of the water rights of Australia's First Nations. Read on for an article by campaigner Will Mooney that appeared in the most recent Chain Reaction magazine. 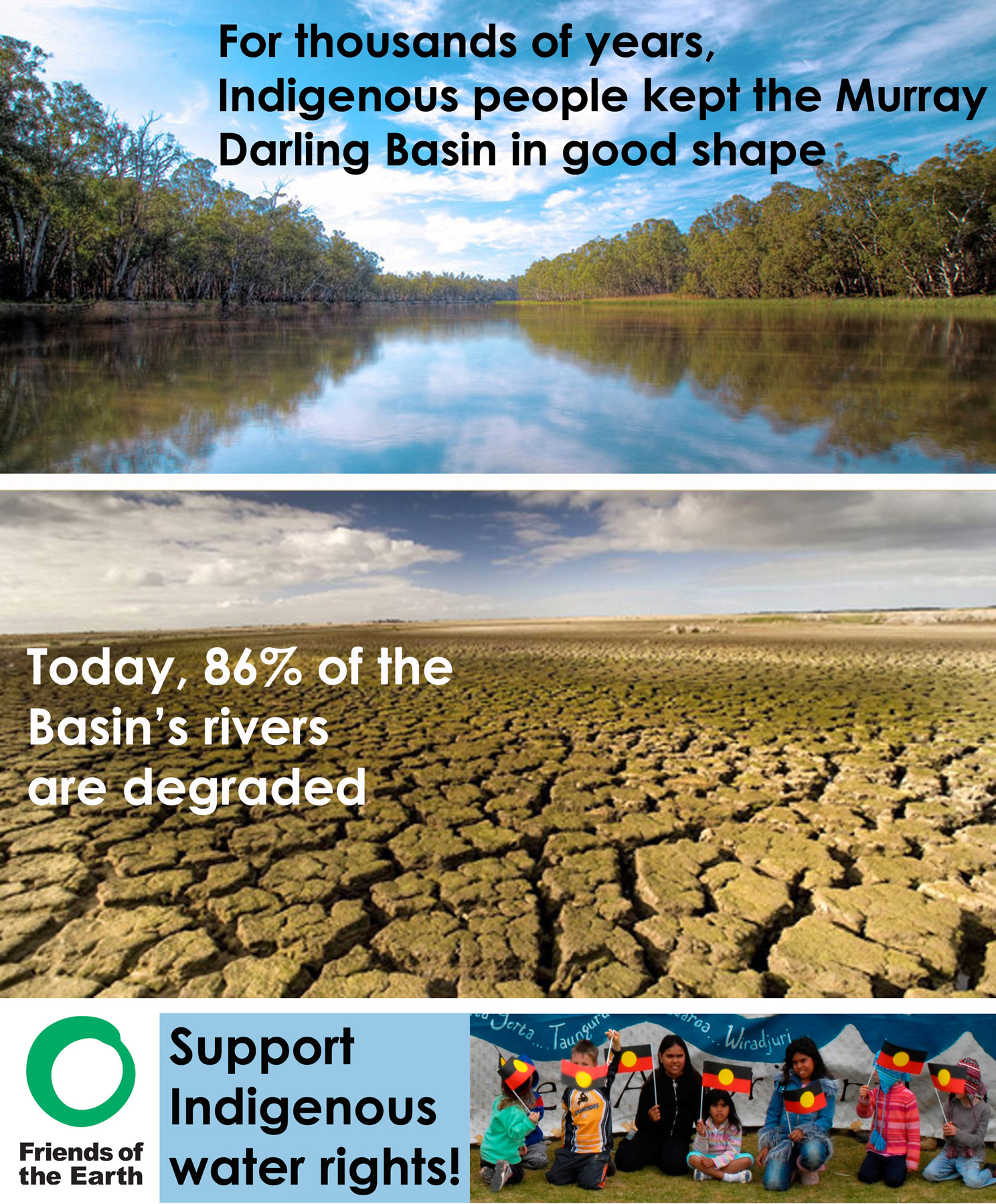 Sitting in a stuffy boardroom at the fancy Park Royal Hotel in Melbourne Airport, the last thing I expected to witness was a spontaneous performance of Indigenous song and dance. Arrayed around the room were delegates from environment groups and Indigenous Nations, as well as a few ministerial advisors and federal bureaucrats. We were here to discuss the review of the Commonwealth Water Act, the key national legislation governing the management of the precious water resources of the Murray-Darling Basin.  At one of end of the room, the review ‘expert committee’ sat before the window, a row of imposing men in suits. Planes zipped back and forth off the runway behind them.

Indigenous campaigners were speaking eloquently about the importance of water to communities dotted across the huge, semi-arid landscape of the northern Basin. Jason Wilson, a Gomeroi man from north-west New South Wales, was fidgeting in his seat. “I’m just gonna have to sing you all a song,” he explained, getting up. “This is the best way I can explain it”. Rubbing his hands and gazing at the members of the review panel, backs against the window, he began. It was a powerful moment.  Jason’s big voice resonated through the drab room, telling a story about big rains and floods on a dry landscape far away. The suited members of the ‘expert committee’, slightly stunned and silent, sat politely listening to this powerful evocation of Country. I had to smile.

Jason’s song was a stark reminder of the challenges facing Indigenous activists and communities across Australia who are campaigning to restore a basic right: access to water on their traditional Country. The materialistic and technocratic discourse of modern water management doesn’t account for the complex, spiritual and holistic perspective of Traditional Owners, whose connection to river country encompasses sacred geography, the movement of spirit beings and ancestors, as well as the day-to-day management of water resources. Jason’s song was met with some slightly confused stares and blank looks from the four members of the committee. For these men, versed in the disciplines of law, reductive science and modern agri-business, old songs about rain and big floods don’t carry much weight against economic data, production figures and peer-reviewed research.

However, the campaign for Indigenous water allocations, or ‘Cultural Flows’, is gaining momentum across Australia. For over a decade, Traditional Owners from across the Murray-Darling Basin have been methodically building up the case for greater recognition of Indigenous water rights. Centuries of dispossession and disadvantage mean that many communities have never had the opportunity, let alone the capital or infrastructure, to own water or participate in the modern water market. A comparison of water ownership in the Murray-Darling Basin shows that Indigenous people combined currently own less than 2% of the water holdings of one large cotton farm, Cubbie Station. Considering how vital water is to ensuring cultural survival and developing sustainable livelihoods, this is a stark injustice. The current review of the Commonwealth Water Act offers an opportunity to address this key ‘unfinished business’ of national water reform.

Indigenous representative organisations such as the Murray Lower Darling Rivers Indigenous Nations (MLDRIN) and the Northern Basin Aboriginal Nations (NBAN) were joined by Environmental groups in August for the roundtable to discuss possible changes to the Act. A crucial piece of reform sought by these groups is to ensure that our national water legislation reflects Australia’s international obligations to support a sustainable future for Indigenous Nations. The Water Act is supposed to give effect to a range of international treaties and agreements, including the Convention on Biological Diversity. But one agreement notably absent from the Act is the UN Declaration on the Rights of Indigenous People (UNDRIP), which Australia ratified in 2009. Indigenous campaigners argue that the Act should be amended to include the UNDRIP as a ‘relevant agreement’ and to strengthen the recognition of Indigenous rights to manage and access water.

In Victoria, Traditional Owners recently assembled a range of experts and Indigenous representatives to discuss the new Victorian Water Bill. This new legislation is set to replace the Victorian Water Act 1989. Like the review of the Commonwealth Water Act, this new Water Bill represents a vital opportunity to ensure that Indigenous rights are given legal recognition. Yet the State Coalition government has all but ignored a decade of research and policy advice from the National Water Commission that calls on all the States to include Indigenous access in water plans. The new Victorian Water Bill does not include any improvements to Indigenous access provisions. The Federation of Victorian Traditional Owners held a symposium in August where delegates developed a policy statement to highlight the need for reform and articulate their views to government. Given the Napthine Government’s current parliamentary stalemate and the scandal surrounding Water Minister Peter Walsh’s Office of Living Victoria, it is unlikely that the Bill will pass this year. However, a strong campaign from Indigenous organisations and non-Indigenous allies is needed to make sure that the Bill is sent back to the drawing board, whichever party wins November’s State Election.

The campaign for Indigenous water rights received a further blow this year when the Federal Government announced that it would be scrapping the National Water Commission (NWC): the independent agency tasked with overseeing government progress on water reform.  A key requirement spelt out in Australia’s water reform policy, the National Water Initiative, is that all governments should improve Indigenous access to water and involvement in water planning. The NWC had held state and federal governments to account for their slow delivery on this requirement. In 2012 they released strong policy advice, encouraging governments to include provisions for Indigenous access in all water plans. In September it was announced that the NWC’s role would be overtaken by the Productivity Commission (PC). Given the PC’s focus on ”ways of achieving a more productive economy” it is very unlikely that Indigenous rights will receive the level or recognition needed to leverage governments into action.

Despite these barriers, there are some powerful and positive steps being taken by Indigenous activists to ensure that this fundamental phase of water reform gathers further momentum. Traditional Owners from MLDRIN and NBAN have established the National Cultural Flows Research Project to document and quantify Indigenous water needs. The Project will engage leading scientists to establish a clear framework for the delivery of Indigenous water allocations or Cultural Flows. Friends of the Earth has been working with MLDRIN and NBAN to increase awareness of this important work and make sure that environmental NGOs understand and actively support Indigenous-led campaigns for water rights. Water managers and politicians are on notice that this issue can no longer be sidelined. The Cultural Flows films, two powerful short documentaries produced by Basin Traditional Owners and Friends of the Earth will be aired on SBS TV next year, as well as featuring at the World Park’s Congress in Sydney this November. Help spread the word by joining us at www.facebook.com/culturalflowsfilms

Traditional Owners across the Basin are working to achieve justice and provide a sustainable future for a growing Indigenous population. Active allies (both Indigenous and non-Indigenous) are a powerful tool. Helping to build an alliance to campaign for water justice is a key focus of the Barmah-Millewa Collective of Friends of the Earth Melbourne. If you’re interested in find out more or being involved in the campaign, contact [email protected]