As the world grapples with the climate crisis, the need to transform our energy systems is only becoming more urgent. In Australia, unions have been at the centre of campaigns for a ‘just transition' to ensure this transition delivers good outcomes for workers and the community.

On the 16th of September 202, several unions, government representatives and environmental groups came together at the Victorian Trades Hall in Carlton for the conference Hitting Targets: A union agenda for a sustainable future. Yes2Renewables collective member Milly attended the conference, which covered key policy levers unions are using to shape the climate agenda.

Everything from a just transition authority, OHS and climate safety, to industry labour standards, sector planning and decarbonising public services was on the table at the event.

As big power companies bring forward closure dates for the country's ageing coal-fired power stations, there is uncertainty about the future in places like the Latrobe Valley in Victoria and the Hunter in NSW, where the coal industry has existed for many years. If the energy transition is going to be fair and just, the need of these communities needs to be a priority.

The event Hitting Targets showed that unions are playing a key role in making the idea of a just transition become a reality.

Visiting from Newcastle, Steve Murphy from the Australian Manufacturing Workers Union spoke about how the energy debate in Australia has shifted from "greenies vs workers" to "climate action and job creation". Steve said unions have an opportunity to seize this moment and ensure that the transition to renewables provides secure, well-paid, union jobs for workers.

With a new federal government in power after a decade of inaction on climate change, there is now a real chance to secure bold and ambitious climate and energy policy that delivers good outcomes for workers and communities.

Senator Jenny McAllister the Assistant Minister for Climate Change and Energy stressed the importance of communities being involved in the conversation of transition and how their concerns are often politicised but are not listened to. Victoria’s Minister for Climate, Energy and Environment Lily D’Ambrosio also spoke about the importance of communities driving the decarbonisation and ensuring that communities are not left behind in the energy transition. She highlighted the opportunities for repurposing workers' skills for jobs in renewables and establishing apprenticeship schemes for the renewable energy industry. 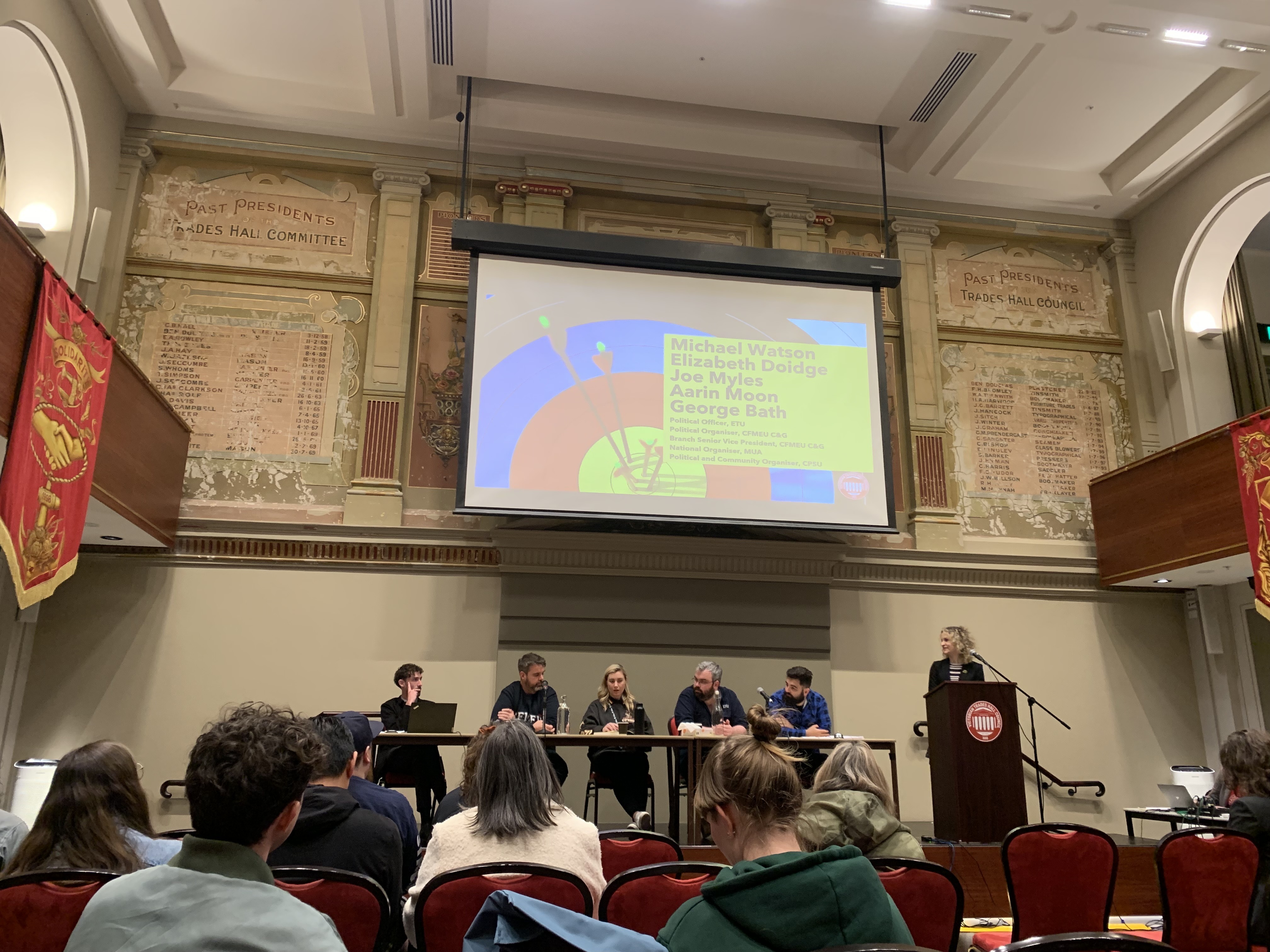 One of the biggest highlights of the event was the focus on offshore wind. In the Minister’s presentation, D’Ambrosio argued that offshore wind represents a huge opportunity to create new jobs and fixing the energy system while reaching climate targets. She described Premier Dan Andrews' commitment to offshore wind as “red hot” and says the state government wants Victoria to be the hub for offshore wind in Australia, with a “deep supply chain and training”.

Victoria has set ambitious targets for offshore wind, planning to build at least 2 gigawatts by 2032, 4 gigawatts by 2035, and ramping up to 9 gigawatts by 2040. These targets alone eclipse the current amount of electricity generated by the state's coal generators.

Min. D’Ambrosio emphasised the need to create deep supply lines for offshore wind and the challenges associated. Currently, the manufacturing sector is not prepared to manufacture offshore wind turbines, but the Minister said consultation will begin next year to identify what is needed for these deep supply chains. This was echoed by Mark Richards from the mining division of the Construction Forestry Maritime Mining Energy Union who said we should focus on manufacturing as many offshore wind components here as possible to maximise local employment opportunities.

As our Gippsland Community Organiser Wendy Farmer says, the energy transition is a puzzle. For a long time, many of the puzzle pieces were missing. As coal power stations close, it’s in these gaps that communities and workers can fall through. But with new industries like offshore wind being created in Gippsland, there is real hope for a fair and just transition.

What’s needed now, is a plan to bring these puzzle pieces together.

TAKE ACTION: Add your voice to the call for a national energy transition authority

The idea of an independent National Energy Transition Authority could be the way to bring the puzzle pieces together. The majority of speakers from various unions discussed how an independent National Energy Transition Authority could give workers and communities a voice in how the energy transition happens. A meaningful seat at the table that can ensure the energy transition has the most beneficial outcomes for workers, communities and the environment.

Unions are campaigning to ensure workers are leading the energy transition and have secure jobs to go to as coal-fired power plants close. The 'Hitting Targets' conference highlighted how renewable energy presents exciting opportunities for thousands of new jobs in the renewable energy industry and local manufacturing as well as taking big steps towards hitting climate targets. These new jobs will be vital in the transition away from fossil fuels, but we need to ensure it is workers and communities getting the benefits from these jobs.