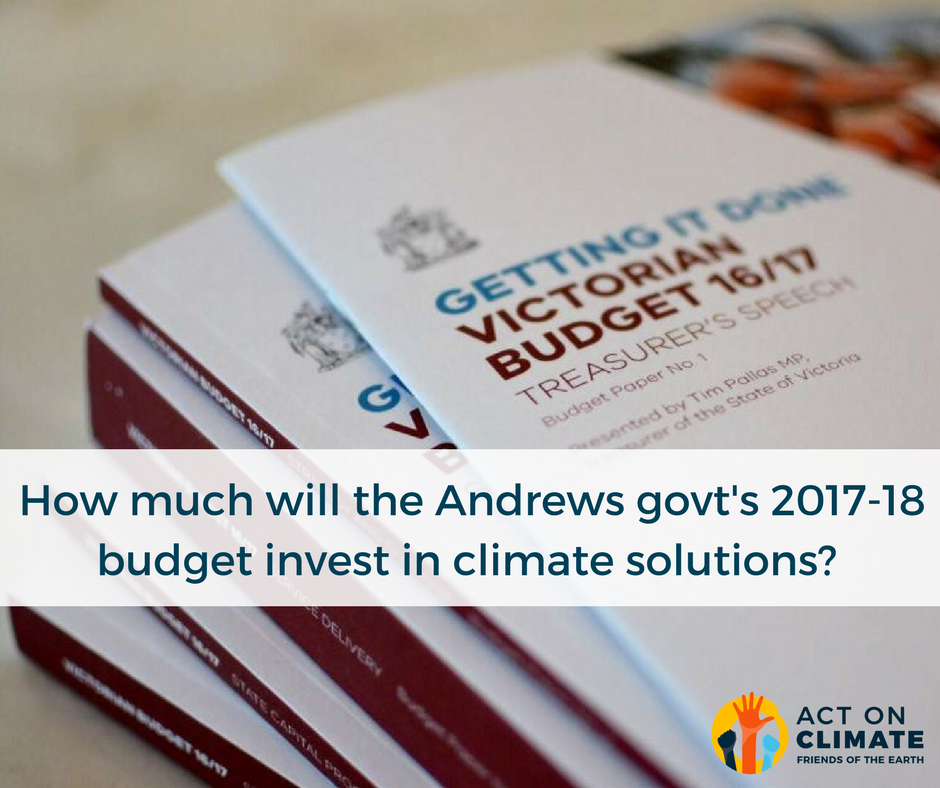 Friends of the Earth say the Andrews government's 2017-18 budget investment in climate change has been modest and that next year’s budget has emerged as a litmus test on the issue.

Of the $798 million allocated to environment in the 2017-18 budget, $153 million is arguably climate-related expenditure—signaling that a greater effort is needed in 2018-19.

“The Andrews government can meet its emissions reduction targets and prepare Victorian communities for the future, but only if next year’s budget has a strong climate change focus," said Leigh Ewbank, Friends of the Earth spokesperson.

"Alarming melting of the polar icecaps and extensive bleaching of the Great Barrier Reef shows all levels of government must to ramp up efforts to tackle climate change, and that includes Victoria.

"Premier Daniel Andrews has shown leadership on climate change to date, but the time has come for his government to invest in climate action."

Friends of the Earth say the Victorian budget is the logical next step for climate change policy.

While the government has a clear grasp of the dynamics affecting education, health, and infrastructure expenditure, it's unclear how climate is impacting the budget and what is allocated towards climate change prevention, resilience to impacts, and disaster response.

"Bringing greater transparency to climate change in the budget will allow for its impact on state finances to be understood and tracked over time. If we don't track the costs, how can we plan for future impacts?," said Leigh Ewbank.

"The Victorian budget has evolved to respond to new challenges, and it’s time for Premier Andrews to bring it into the 21st century by accounting for climate change—an issue that will have budgetary implications for decades to come."

Friends of the Earth say greater transparency on climate-related allocations (mitigation, adaptation, and disaster response) is a zero-cost measure that will enhance the Andrews government's climate change initiatives.

The Andrews government has strengthened the Climate Change Act 2017, enacted a permanent ban on onshore gasfields, and will soon legislate a Victorian Renewable Energy Target that will build 5,400MW of new solar and wind by 2025.

“We agree with Treasurer Tim Pallas that climate change is a genuine threat,” added Mr Ewbank.

"It’s why the Andrews government needs to lead Victoria in another round of action to protect communities from the climate change impacts. And it can start in the budget."