On Wednesday 26 February, Friends of the Earth had the opportunity to present to the Victorian Parliament's inquiry into community action on climate change. Here's Act on Climate coordinator Leigh Ewbank's statement to the Planning & Environment committee:

In my time at Friends of the Earth, I’ve seen the incredible commitment of Victorian communities to tackling the climate crisis.

Friends of the Earth is a community-driven organisation formed in 1974. We have been a strong voice for environmental protection and social justice since then.

We have been engaged on the issue of climate change for over two decades and work towards cutting greenhouse gas emissions and building resilience through practical programs and advocacy.

Friends of the Earth’s Food Co-op & Café in Collingwood is a case in point. With produce from 150 farmers across the state, the café serves organic, seasonal, and vegan meals to our community every day.

The intentional use of local produce minimises the embodied carbon emissions from excessive transportation. Each year the café serves over 24,000 plates of food including to vulnerable people in the neighbourhood.

All compostable waste from the cafe is transported to a nearby primary school, which is only a couple of hundred metres away, where it is composted and used by the students to grow vegetables and educate them about the benefits of urban farming.

In addition to these practical examples, Friends of the Earth has been actively involved in advocacy. Each night of the week, dozens of community members work together on positive solutions. 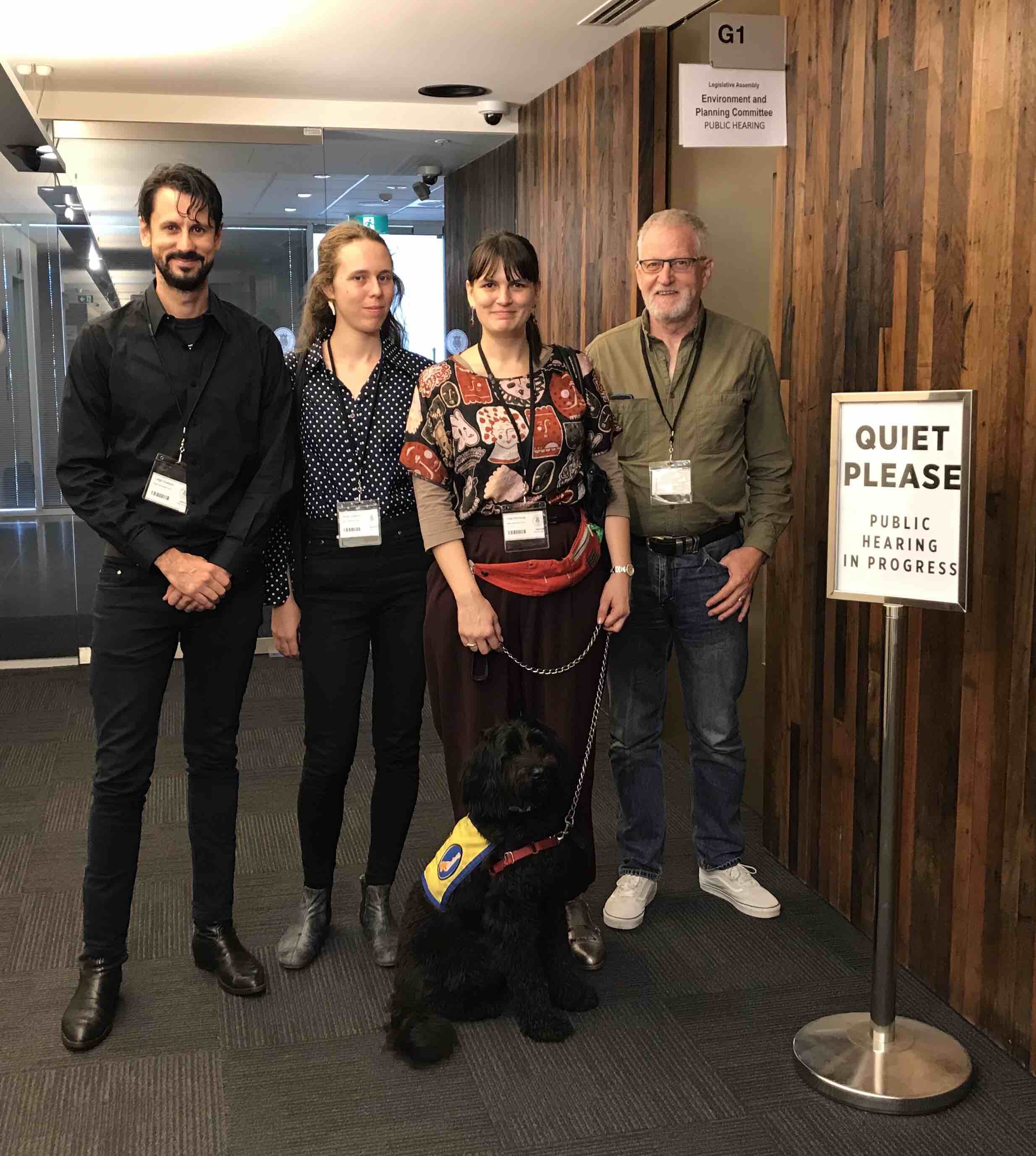 These groups of community members tackle the problem in a holistic way and seek to cut emissions across the whole economy.

Some are focused on decarbonising the energy and transport sectors, while others work for protecting forests as carbon stores.

Community campaigns to protect forests, rivers, and vulnerable species such as koalas to give the natural world a fighting chance as the planet heats up.

Inspiring community action on climate change can be found in all corners of Victoria.

I encourage the committee to pay close attention to the following examples for insights into how governments can support communities.

The local surf beach has seen 50 metres of beach lost to the southern ocean since 2012. The lifesaving clubs patrol box has been moved several times, at great expense, and has been put onto a sled due to the pace of change.

The Bunurong Road and multi-million dollar Surf Lifesaving Club are now at risk. The state government has provided emergency funding to arrest the erosion thanks to community members sounding the alarm.

Imagine the situational awareness that the government and authorities could gain by supporting citizen science.

The small rural community of Tarnagulla in the Central Goldfields is also worried about climate impacts.

Community members are concerned about increased heatwaves and bushfires—an issue compounded by the fact the CFA has shrunk from 45 people to just ten.

Thanks to a small grant from the state government, Linda Kennedy and the Tarnagulla Alternative Energy Group have developed a resilience plan with support from RMIT University.

But will it be able to find resourcing to roll it out?

When it comes to climate mitigation, community action in the Hepburn Shire is a stand out example of leadership.

The community-owned Hepburn Wind farm produces enough renewable energy to offset the carbon footprint of all the homes in Hepburn Springs, Daylesford, and Leonard’s Hill. It has helped Victoria avoid 87,000 tonnes of GHG emissions.

The successful Hepburn Wind farm created a platform for the Hepburn Shire to develop a plan to cut emissions across the whole economy to achieve zero-net emissions by 2030. This outcome would ensure the shire does its share of keeping global warming below 1.5C.

Will it be able the access the start-up funding to kick off implementation?

There are many other examples of leadership on community energy and storage in Yackandandah, Newstead, Strathbogie Ranges, Bendigo, Ballarat, and elsewhere.

Based on our longstanding efforts to tackle the climate crisis and engagement with communities across the state, we encourage the committee to consider the following recommendations:

The Victorian government can show leadership by centring climate science in policy development.

For example, the Andrews government will soon set interim Emissions Reduction Target for 2025 and 2030. With climate impacts occurring much faster than scientists predicted, the litmus test for the government is whether the targets help keep global warming below 1.5C.

The Combet Report identifies a targets of 43 percent below 2005 levels by 2025 and 67 percent by 2030 to give us any chance of meeting that goal. A heavier lift up front of a 75 percent by 2030 would give Victoria the carbon budget needed to meet the 1.5°C challenge by 2050—the legislated deadline for zero-net emissions in the state.

People of all political persuasions are taking action on climate. The Victorian Parliament has an opportunity to reflect this fact.

Bipartisan support for the Climate Change Act 2017—which enshrines the target of net-zero emission by 2050 into law and sets out the process for target setting, among other things—is an essential step.

A public commitment to the Climate Act from the opposition would give communities confidence that efforts to rein in emissions will continue regardless of which party forms government.

The communities demand for start-up funding has outpaced what’s on offer and it’s time for the government to catch up.

Despite receiving more than 240 applications, there was only enough funding to support 24 projects (nine in ten missed out on a grant). Friends of the Earth estimate that a fund of $70 million would have been needed to support all those who applied.

A dedicated $100 million Victorian Climate Change Action Fund (VCCAF)would fill a key gap. Given that climate impacts and solutions are highly context-specific, a statewide fund would help communities rollout projects that are relevant to their needs.

Each year the government demonstrates its values and priorities in the budget. And Victoria has never had a budget focussed on driving climate action.

If the state is to achieve the objectives of the Climate Change Act 2017, deliver emissions cuts, and implement the forthcoming Climate Strategy and Climate Adaptation Plans, we will need to see a down payment on action this term.

The Climate Budget concept is not just about the level of investment, it’s about better accounting and transparency.

The government cannot afford to fly blind when it comes to the climate impact of public spending. The Department of Treasury and Finance will have to adopt tools to evaluate the climate dimension of budget decisions to ensure investment flows to initiatives that cut emissions, not increase them.

5. A commitment to Climate Justice:

The onus for cutting emissions should be on those most responsible for producing them. It would be unjust to place the burden onto those who have contributed least to the problem and future generations.

Victorian politicians can show a commitment to fair and just outcomes by:

– Seeking out the view of First Nations people and ensuring they have the support they need to have an active role in policy development.

– Ensuring communities on the frontline of climate impacts are front-of-mind in the development of climate policy.

– Supporting communities dependent on fossil fuels and extractive industries through the transition.

Tackling climate change means cutting emissions in the electricity sector and across the whole economy. Communities currently dependent on fossil fuels and extractive industries will see a lot of change in the years ahead.

The establishment of a dedicated Minister for Transition and scaling up the Latrobe Valley Authority into a statewide Just Transition Authority are two practical stepsto give communities the support they need to prosper as Victoria moves towards a zero-carbon economy.

Leadership from the Victorian Premier and government can emphasise the importance of climate action for the general public and deliver results.

In the 2000s, the Bracks government undertook a public education campaign to build consensus for tackling excessive water use during the Millennium drought. Victorians rose to the challenge, changed their behaviour, and helped the state achieve dramatic water savings.

The Victorian government can draw inspiration from this approach and embark on a public education campaign that elevates climate action as a state priority.

Friends of the Earth would like to thank the committee for the opportunity to present our views. We look forward to seeing the committee's final report and recommendations.