A ban on Fracking in Victoria? What a great idea 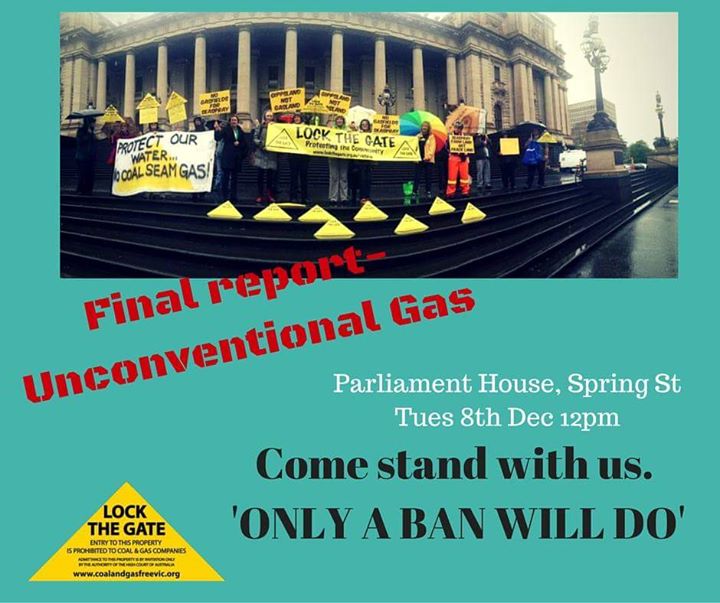 On tuesday December 8, the parliamentary inquiry into unconventional gas (UCG) will release its final report. It is not an overstatement to say that this puts Victoria at a crossroads in terms of our future energy policy. This is the best chance our state will ever have to stop this invasive industry before it gets established.

As a fuel, UCG is the same as the natural gas that you might use to cook on or heat your home. The only difference is that previously, it was hard to get to because it was buried very deeply or trapped in coal seams or shale or sandstone beds. But improvements in technology and rising gas prices have opened up new gas fields around the world. Generally UCG needs to be 'fracked' to be released. Fracking (hydraulic fracturing) creates a mini earthquake which fractures the rock or coal seam containing the gas, and a mix of chemicals and water are blasted into the seam to release and withdraw the gas. The potential for groundwater contamination is well known and well documented. There are a whole range of environmental and public health concerns related to this industry.

Here in Victoria, much of our best farmland is under exploration license for UCG. In response, communities got organised, and in a remarkable example of grassroots democracy, door knocked many thousands of households to test the level of support for the proposal that the community declare itself coal or gasfield free. With an average level of support sitting at 95%, communities then started to 'declare' themselves. So far 69 Victorian communities have gone down this path, closing off their region to the gas industry through a symbolic but powerful statement that the industry has no social license to operate.

As a result of this campaign, the main political parties have shifted their position on onshore UCG. The Coalition announced a moratorium on further exploration and when the ALP came to power they moved quickly to establish the inquiry into the industry that had been part of their election commitment.

The ALP wisely chose an Upper House committee to run the inquiry, meaning that there were MPs from the ALP, Coalition, Greens and Shooters Party. The subsequent inquiry received more submissions than any environment inquiry in Victoria's history, and at the public hearings, the committee heard compelling evidence about the dangers posed by this industry.

While the gas industry has lobbied hard for the moratorium to be lifted, pretty much everyone else has opposed it. This has included individual farmers and also the peak body, the VFF. Tourism operators, food manufacturers, regional communities, environmentalists and those concerned about climate change, local councils and dozens of businesses across the state have been active. This has seen an unprecedented alliance between environmentalists and regional and rural communities. The Victorian Auditor General's Office, in its submission to the inquiry, highlighted the many known risks of the industry and the fact that we are not ready to effectively manage them.

And now we come to the end of the process. On tuesday December 8, the final report from the inquiry will be tabled in parliament. The government will then need to consider its response. There is growing awareness that UCG will not be able to provide price relief for household or commercial users. It is clear that royalties will be minimal because no one has yet been able to prove up the resource to the point of commercial production. Gas prices will continue to rise because the federal government has locked us into competing for gas on the global market through promoting the export of LNG from northern Australia. Research by organisations like the Melbourne Energy Institute has shown that we can transition away from our current heavy reliance on gas, and save money in the process. No one can even guess how many jobs will be created, or what percentage of these might go to locals.

What we do know is that there is resounding community resistance to this unpopular industry. We know, from the experience in Queensland and elsewhere where the industry has managed to get established, that there are destructive impacts on farmers, landscapes and ground water.

Victoria is a small, densely populated state which is heavily reliant on its agricultural sector. With all the known dangers, the only sensible option is to ban the industry. In some places it is already too late and the damage has been done. Victoria is lucky to have the opportunity to stop this industry before it gets established. A growing number of jurisdictions, like the USA state of New York have put permanent bans in place. A ban will give certainty to communities and industry. Back in the 1980s, the ALP banned the exploration and production of uranium in Victoria. Because of the inherent risks with this industry, this was the right thing to do. In 2015 the current government should have the courage to respect both the science and the community, and place a permanent ban on all onshore gas drilling.

We will be gathering for a 'photo opportunity' for the media on the steps of Parliament from 11.30am. Please be there by 12 noon. Bring banners and friends to show the government you want them to ban all onshore gas drilling.

If you support our call for a permanent ban on onshore gas drilling please sign our petition.