A Dead River’s a Real Drag 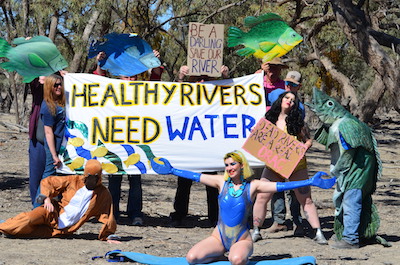 It’s quarter to midnight, and we are driving as fast as we can in a twin cab ute named Djinn on a dirt road that is mostly potholes, avoiding kangaroos and stopping only to pop a squat on the red dirt. We sing along to Aussie prog rock and admire all the stars in the clear sky. We have driven 800 kms from Narrm to advocate for a dying river system with queer drag and performance art.

The Murray-Darling Basin has been been extremely mismanaged with devastating results. The finger is pointed mainly at foreign owned cotton and almond farms who have been allowed to steal the water from its source. Suspicions also lie with recently built mines that are plotted along a new 230 km long pipe line which is pumping water from a lower part of the river from Wentworth to Broken Hill under the guise to “solve” the drinking water shortage problem in Broken Hill. Meanwhile the river is getting lower and lower, seriously affecting native animal populations, including the endangered Golden Perch, as well as culture and community. It is believed that parts of the river will be completely dry by Christmas. 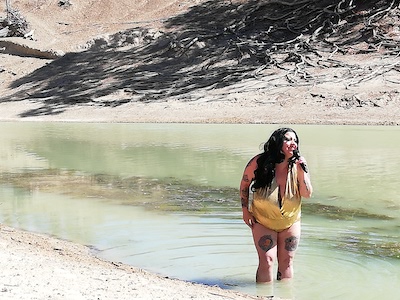 Our first destination on the River Country Campaign mission is Tolarno sheep station. Driving up to the hundred year old house we are met by Rob McBride and the postie Jeff with smiles beaming, spaghetti on the stove and giant glasses of locally harvested red wine from orchards that cease to exist anymore due to the drought. Rob gives us a tour of the house, starting by paying respects to the Barkindji people, which translates literally to “belonging to the river” who are the traditional caretakers of the land we are on. The lack of water in the Barka (river) directly impacts these people’s culture and identity, the Barkindji people of Wilcana are known as having the lowest life expectancy in this country of only 36 to 42 years of age. It is believed that the destruction of the river has had a direct influence on this statistic.
The following morning is Threatened Species Day and we jump straight into action. Weird Alice, a performing artist from North America, and myself get busy painting our faces up in drag while Megan Williams (the campaign coordinator), Jemila Rushton (fellow activist and owner of Djinn) and Rob rush around getting ready to host a number of locals whom we perform to on the dried river bed. Weird Alice sings a powerful rendition of “I Will Survive” as the endangered Golden Perch, and I lip sync “When The River Runs Dry” as a native Blue Yabby while locals dance around me with cardboard cut outs of dead fish. In what feels like a flash of lightening videos are edited, photos are uploaded and a media release is sent out into the world with the hopes of getting some coverage about the dying river.

We say our goodbyes to Tolarno then get in the car and drive another hour to the once great Menindee Lake, now bone dry, it is a very sad sight to say the least. We set up next to a couple of unsuspecting camper vans while a bevy of locals and activists pour in with their fold out chairs to watch our drag show and hear our plight for the river. Petitions are signed that we are compiling to send to the Minister of Water to stop corruption in river management, and to implore them to keep environmental water in the river where it belongs! 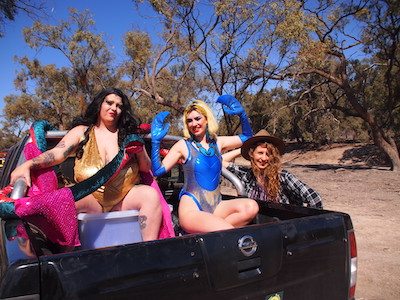 The following day our hard work pays off as we have made the front page of Broken Hill’s “Barrier Daily Truth”! This coincides perfectly with Broken Heel Festival, a three day event celebrating all things drag inspired by Priscilla Queen of The Desert. What appears to be your classic country mining town is painted pink and the LGBTQI+ community of Broken Hill, and greater Australia, fill the town with colour and flare. As well as drag shows at night in the amazing Palace Hotel, there is a huge parade through the town which we walk in holding our banner proudly, Megan dressed as a Murray Cod “swims” the whole length of the street to the delight of all onlookers. Having seen us in the paper many locals thank us for our support and advocacy for the river, asking how they too can help stop the corruption and signing the petition. We even enter the best dressed competition and have the hosts ask everyone to pay attention to the importance of our cause. It is obvious that the issue of the river drying up is felt so deeply by many

We finish the weekend off heading out to Silverton pub to share a beer and a laugh with the staff and some local donkeys (literally). Reflecting on what we have done it feels like a small splash in the face of the on going devastation and disrespect to the Murray-Darling Basin, but we sit and plan how we can do it bigger, queerer and more inclusive next time. Using drag and performance to make our splash turn into a whole monsoon of action and activation to save the Barka. As Megan Williams said “Drag is the art of resistance. We are dancing in solidarity with endangered species and communities who have been left out to dry. The queer community has fought for our existence for generations and we are here to give voice to threatened species to say “I will survive”.’