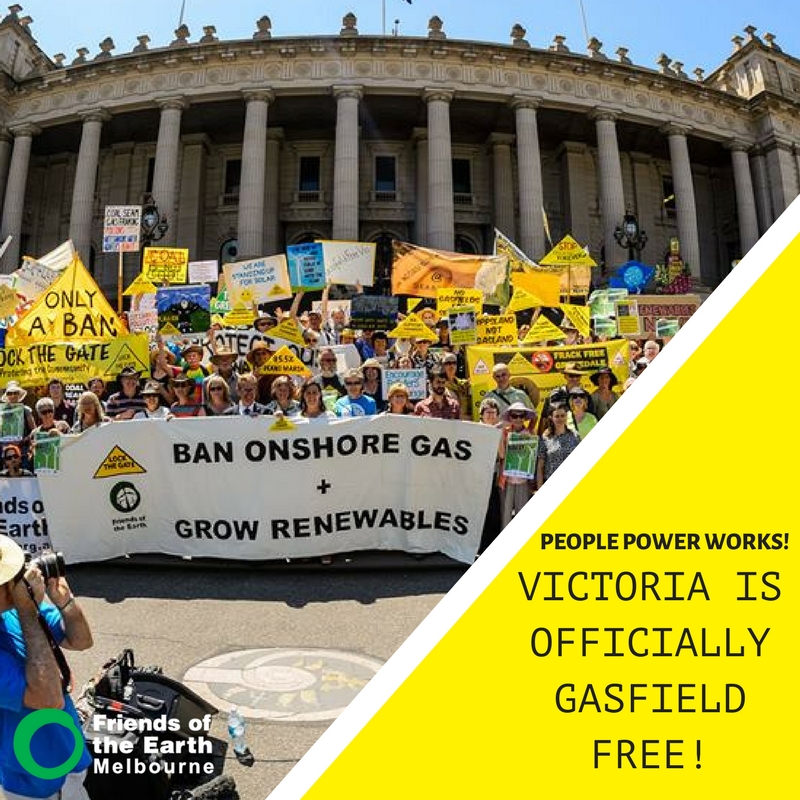 We did it! Today Victoria became the first Australian state to permanently ban the process of fracking to access ‘unconventional’ gas (gases like coal seam gas or CSG, and Shale and Tight gas). We also achieved an extension of the moratorium on onshore conventional gas drilling until 2020.

This is an amazing day. It is the result of more than five years of hard work and dedication by many thousands of Victorians. 75 regional communities declared themselves gasfield free during this process. By 2012 we had built enough collective power that we were able to stop all development of onshore gas drilling in our state. Today the ban on fracking was made permanent.

This is an incredible win for the communities in regional Victoria who fought for more than five years to gain this ban and their allies in Melbourne (short summary of the campaign available here).

Today the Bill was debated in the Upper House. At the last moment we hit some significant hurdles. Recently the Shooters, Fishers and Farming Party put forward an amendment which would have seen the moratorium on conventional gas overturned. We helped organise a last minute lobby of MPs, and were able to secure the numbers to see the amendment soundly defeated.

Then in the final hours, it looked as though the Coalition were also preparing to table an amendment on the moratorium, a move that would have delayed the passing of the bill, betrayed rural communities right across Victoria, and potentially placed food and water security at risk. But a strong community response over the last 12 hours has made sure this has not happened.

We have achieved an incredible victory today. It is already inspiring campaigns around Australia and the world because it shows that the community can win against the gas industry.

But, the fight is not over. With political parties more regularly positioning themselves to block the will of communities, we need your support to continue to combat the threats to land, water and climate in Victoria.

Can you donate to Friends of the Earth today, and support our grassroots campaigns?

The last minute threat to the passing of the Gas Ban follows an announcement last month that if elected at the next State Election, the Coalition would scrap the Victorian Renewable Energy Target (VRET). The Coalition also voted against the Victorian Climate Change Act in February, attempting to block policy that embeds a commitment to Paris Agreement and making it clear that they are happy to vote against a safe climate future for Victoria. We have an uphill battle to convince the Coalition to take climate and environmental issues seriously.

We will be celebrating the victory of a permanent ban on fracking tonight! We hope that wherever you are, you can grab a few friends who helped win this wonderful victory and enjoy this great moment. People power works!

Our campaigns will continue to work in regional communities across Victoria to uphold the wins that have been fought for over the last 5 years. We will combat the attacks on robust climate policy and renewable energy investment and demand a move towards safer climate solutions from our political leaders.

It’s worth thanking the pollies who listened; Premier Daniel Andrews, Lily D’Ambrosio, Wade Noonan, Fiona Patten, James Purcell, The Greens, who supported this campaign from day one and the upper House minor parties who opposed the amendment. Click here for a full list of people to contact and thank.

Thank you to everyone who built and sustained this campaign. In a time of deep cynicism in politics, this shows what communities can achieve when they work together in a strategic and determined way. Drilling would be happening now in a number of places across southern Victoria if we all hadn’t got active.

It was the community who lead this campaign and shifted the political parties. Without relentless grassroots organising, we would not have come as far as we have today.

Please continue to support the work of Friends of the Earth, and the ongoing work we do for communities and climate by making a donation today.