Tell GDF Suez to invest in renewables not coal 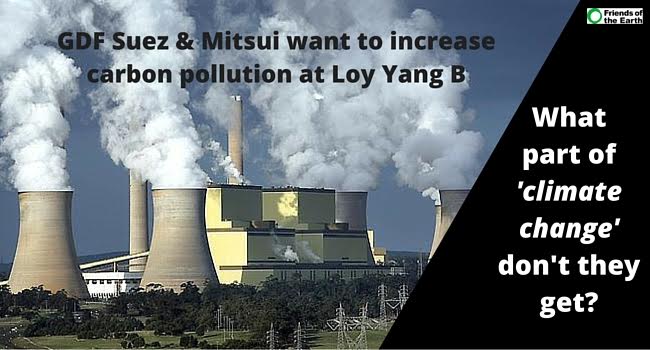 GDF Suez (owned by the French company Engie) and Mitsui run the Loy Yang B power station in the Latrobe Valley. Loy Yang B produces about 17% of the state’s electricity. According to the ACF, GDF Suez is the third worst polluter in Australia.

Globally, the parent company Engie has made a lot of noise about how it will shift away from investing in coal in coming years.

Yet GDF Suez has just announced that it hopes to spend ‘tens of millions’ of dollars to upgrade the turbines in the Loy Yang B power station.

Why would a company that is serious about climate change be further investing in coal?

The company claims the new turbines will be more efficient and therefore produce less greenhouse pollution. But it will also allow them to burn more coal, so overall their emissions can be expected to go up. The company can increase emissions and still be inside their EPA allowance. One estimate, from the Latrobe Valley Sustainability Group, suggested that the upgrade could result in the burning of an extra 200,000 tonnes of coal per unit per year.

Instead of investing in new turbines, the company should:

Any talk of a transition can only be meaningful when the company starts to retire existing coal fired capacity and investing in renewables rather than investing in additional greenhouse gas emissions.

It cannot be allowed to abandon the Latrobe Valley community in its announced (but open ended) plans for a global ‘transition’ away from coal.

Please sign the petition to the Chair of GDF Suez’ parent company Engie.

For additional information please see the Voices of the Valley or Friends of the Earth.