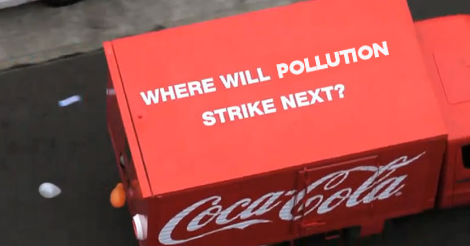 The Beverage Industry led by Coca-Cola is the primary cause of a major environmental problem.

This problem is that every year in Australia about 8 billion drink containers become litter or go to landfill.

Coca-Cola and their allies have spent years and millions of dollars opposing a solution to this problem.

They are the primary reason why this problem exists. They get these containers made. They profit from their sale BUT they oppose the only proven way of MAKING SURE a much higher percentage of THEIR DRINK CONTAINERS are recycled.

The solution to this problem is a container deposit system (CDS) on drink containers as in South Australia, the Northern Territory, several North American states and a number of European countries.

With a container deposit system, much higher recycling rates will keep billions of drink containers out of our rivers, creek, bays, oceans and landfills and off our roadsides. It will save a lot of energy, water and finite non renewable resources. It will also help charities fundraise millions of dollars from cans and bottles.

By telling Coca-Cola to ‘do the right thing’ you can help put pressure on them to stop lobbying Victorian politicians against introducing a container deposit system and stop running scare campaigns against a CDS.

For background information on why a CDS is a good idea, please check here.

Please sign our letter to Coca Cola, urging them to do the right thing.

I support a Container Deposit System (CDS) because every year, in Australia, at least 8 billion drink containers either become litter or go to landfill. As proven in South Australia, the Northern Territory and elsewhere only a CDS will fix this problem.

Your company must stop blocking CDS if it wants to be seen as a good corporate citizen. Your industry has had 38 years since the introduction of a container deposit system in South Australia to come up with credible and effective alternatives to CDS. In that time no other litter policy, strategy or education campaign has worked and this problem has steadily got worse.

Your ‘Thirst for Good’ campaign is more of the same. If your company does not change course it will be seen as the cause of this problem.