Support FoE and support green energy at the same time. 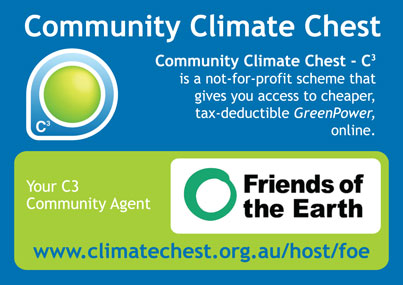 The federal government gutted the Renewable Energy Target (RET), which has directly caused the loss of several thousand jobs in the renewable energy sector.

We need to keep the political pressure on and demand the RET be restored to a level that will drive the development of new renewable energy in Australia.

There is also a way we can help the transition to renewables. By purchasing green power (energy from renewable sources like wind, solar and hydro) we are helping create a strong economic environment that will drive further investment in clean energy.

FoE has partnered with Community Climate Chest or ‘C3’ to give households and businesses access to cheaper, tax-deductible GreenPower. FoE benefits by receiving a 10% donation from all GreenPower transactions.The C3 model meshes well with FoE’s philosophy as it is a community-run not for profit (NFP) scheme developed by the Macedon Ranges Sustainability Group, and is administered by another NFP, the Alternative Technology Association.

Your GreenPower is sourced through ACXargyle, an accredited GreenPower provider. You can select the source of the energy if you want to as you sign up. 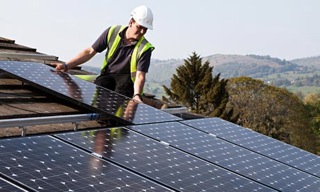 Most of the major energy retailers are heavily involved in the coal and unconventional gas industries. A number of them have actively undermined the RET.

The major energy production companies - Energy Australia, AGL and Origin – are three of Australia’s ‘top ten’ carbon polluters (Source: ACF), and AGL and Origin are ranked amongst the worst of the retailers by Greenpeace and the Total Environment Centre. They all have power retail arms, which means that you, as a consumer, can send them a direct message that you don't support them investing in fossil fuels.

Many FoE members and supporters have already shifted their retailer. Many have solar panels, and some are off grid. For those of you who have not yet made the move, here's a great chance to reduce your carbon footprint, send a message to the retailers, and help FoE at the same time.

C3 does not offer a retail option – so this campaign works in two parts.

NB: FoE does not have a financial connection with any of these companies. We have listed them based on the Greenpeace/ TEC assessment on the Green Electricity Guide website. 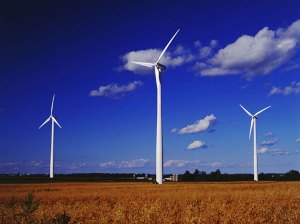 Red Energy is owned by Snowy Hydro Limited, a corporation which is in turn owned by the New South Wales, Victorian and Commonwealth governments.

Aurora Energy is wholly owned by the Tasmanian Government and sells the energy from Tasmania's hydro dams.

Momentum Energy is owned by Hydro Tasmania, which is Australia's largest owner of renewable energy generation.

You can find out more on each of these companies on the Green Electricity Watch website.

If you've already shifted your power retailer, then please consider other ways you can support FoE's work on climate change.