Across Victoria, communities have been opposing fossil fuel projects that threaten their health, their water, their economies, and are incompatible with a liveable climate.

From 2011 until 2017, Friends of the Earth played a key role in the successful campaign to:

Now, in 2020, the community's voice is more important than ever if we are to protect Victoria from fossil fuel developments.

In Victoria’s south-west, communities are opposing planned oil and gas exploration in the Otway Basin.

Large sections of ocean in state waters off the coast, from near Cape Otway to the SA border have been offered up predominantly for gas exploration. An announcement on which companies have won the contracts to explore in these areas is expected after June 30, 2020. 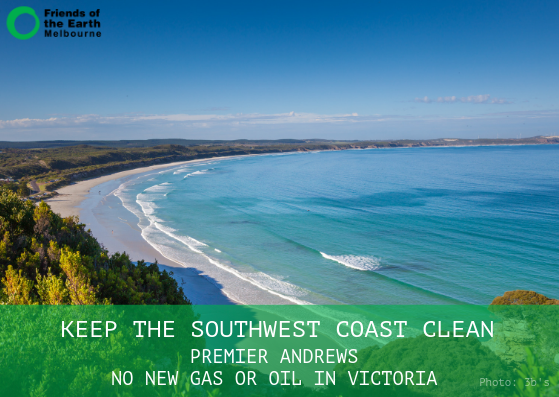 In the south-east, locals are working to stop an experimental coal-to-hydrogen production facility and associated waste-carbon injection project off the beautiful Ninety Mile Beach, as well as proposed new offshore gas and gas storage projects.

While fracking (unconventional gas drilling) has been banned permanently in Victoria, a moratorium was placed on onshore conventional exploration and drilling. This has been in force since 2014, and will expire on June 30, 2020.

Sadly, in March 2020, the Andrews government announced that it intends to lift the moratorium.

No gas exploration of other activity can occur until after June 30, 2021.

We are calling on Premier Daniel Andrews' government to stand with communities and a safe climate, and commit to no new fossil fuel projects in Victoria.

We need to mobilise now to make sure no new fossil fuel projects are established.

Now is the time to act decisively on climate change. The time for business as usual is over.

This means no more development of fossil fuel projects, and no more threats to land and water.

For our vision about how Victoria could transform it's energy system to 100% renewable energy, please check our Transforming Victoria document.
https://www.melbournefoe.org.au/transforming_victoria_creating_jobs_while_cutting_emissions