VicRoads have now begun works on the Western Highway expansion at the Djap Wurrung Protection Embassy. On Monday 9th September, Transport Infrastructure Minister Jacinta Allan reaffirmed the Andrews Government's commitment to go ahead with the current route, stating that there is no viable alternative.

The camp is calling for immediate support on the ground, but for those unable to be there, it is imperative that we make back up the voices of Djab Wurrung Traditional Custodians and make ourselves heard.

Join us in calling on Premier Daniel Andrews, Minister for Major Projects Jacinta Allan, Planning Minister Richard Wynne, and Minister for Roads Jaala Pulford, to cancel the eviction notice, and direct Major Roads Victoria to restart planning for this project, with Djab Wurrung at the centre of negotiations 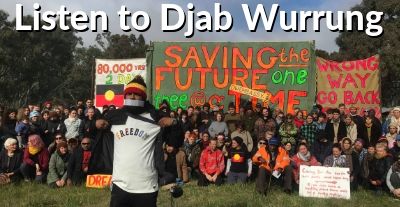