The most recent IPCC report has endorsed the view of climate activists and scientists who have warned that countries cannot burn the world’s known reserves of fossil fuels without sending the climate system into a dangerous tailspin.

Research released in 2017 has identified which reserves must not be burned if we are to keep average global temperature rise under 2C. This includes over 90% of US and Australian coal and almost all Canadian tar sands.

In May 2017, the world passed the first carbon dioxide reading in excess of 410 parts per million. Carbon dioxide hasn’t reached that level in millions of years. It’s a new atmosphere that humanity will have to contend with, one that’s trapping more heat and causing the climate to change at a quickening rate.

We believe that as a state-based environmental organisation, our best contribution to slowing climate change is to stop the further development of fossil fuel projects in Australia and help drive the transition to 100% renewables as fast as is humanly possible.

We have had a very successful couple of years, with two key campaign wins in 2016. 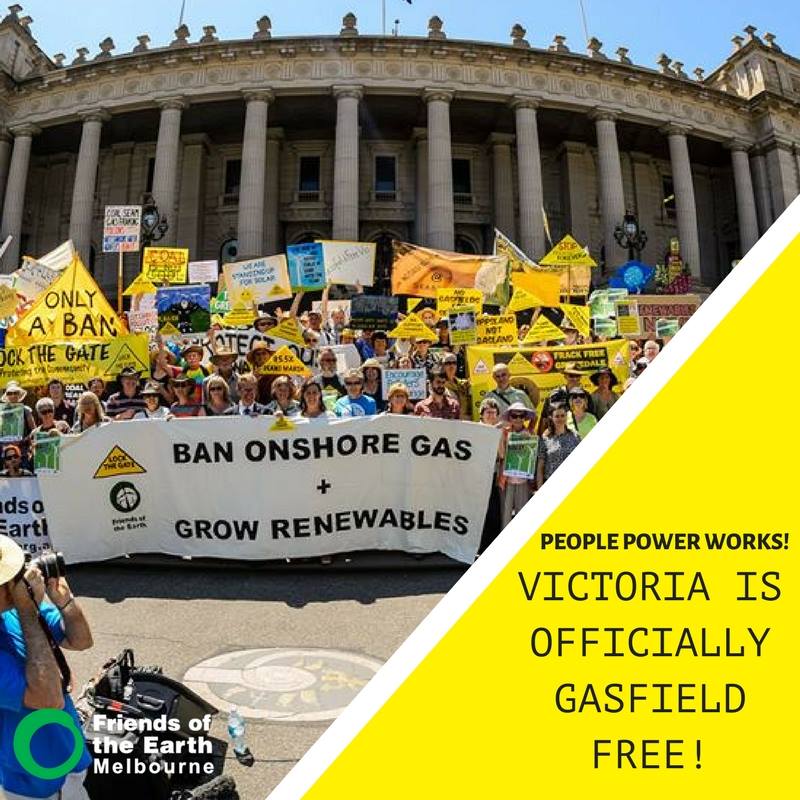 For the past six years, we have been focusing on stopping the development of the unconventional gas industry (UCG) in Victoria. We have now been successful, with Victoria announcing the first permanent ban in Australia on the process of fracking for UCG. For a short history of this campaign, please check here.

Almost three years after a campaign was launched by FoE, a state VRET of 25 percent by 2020 and 40 percent by 2025 will be legislated in mid 2017. For a short history of this campaign please check here.

Please see below for a summary of the threat posed by climate change and links to our current campaign activity.

Climate change 101. What’s happening to our planet and why. More coming soon.

What does climate change mean for Victoria? A brief summary from the Australian government.

Impacts on Victoria. Climate change isn’t something that might happen in the future. It is already impacting on ecosystems and people around the world. Locally these impacts are also being felt in higher temperatures, longer heatwaves and droughts and more severe bushfire seasons.

Here are some regional summaries of climate change on our state:

Quit Coal. Quit Coal is a collective that campaigns against the expansion of the coal and unconventional gas industries in Victoria. Please check the Quit Coal website for further information.

Yes 2 Renewables. Y2R is Friends of the Earth Melbourne’s campaign for 100 per cent renewable energy. Please check the Y2R website for further information.

Act on Climate. AOC was launched in late 2016 and is Friends of the Earth's campaign for action on climate change in Victoria.

C&GFV was set up during the campaign to stop unconventional gas drilling in the state.

AGL want to locate a gas import terminal in Westernport Bay. This will threaten the beautiful Westernport coastline which is a Ramsar-listed wetland and home to rare marine life and migratory birds. Worse still it will increase climate pollution from more dirty fossil fuels we don’t need.

We’ve launched a call for the 2018/19 state budget to focus on funding climate action and full transparency regarding how much climate change impacts are costing our state. For further information, and to get involved, please check here.

The moratorium on conventional gas mining.

The current moratorium on onshore conventional gas drilling has been extended until 2020. During this time the state government is carrying out investigations into the size of the conventional gas resource and collecting baseline data about the state of the environment. FoE is tracking this process. Full details soon.

The state government will shortly release a new policy on coal. It is expected that it will outline the government's approach to the question of whether coal still has a place in the state's economy.

FoE believes the time for new development of any form of coal is long over.

For details on what we think should be included in the policy, and ways to take action, please check here.

We believe it's time for governments to stop using taxpayer money to fund research or development of this technology.

ESSO has recently opened its new gas conditioning plant at Longford in Gippsland, promoting it as the largest domestic gas project on Australia's eastern seaboard.

There are serious negative climate change impacts associated with this plant. It has substantial greenhouse emissions and further locks us in to continued use of fossil fuels.

The Valley has traditionally relied on coal to provide a large part of the region’s employment and economic activity. Yet, as the closure of the Hazelwood power stations shows, change is coming to the Valley. We need a plan for a fully funded transition plan for the Valley. Details coming soon.

We are working with communities in Gippsland to ensure there is full rehabilitation of previous gas fracking operations.

The Point Henry aluminium smelter was located near Geelong and operated for many decades prior to its closure in 2014. Since 2014 both Alcoa (who operated the smelter) and the state government have been considering what to do with the site. It is a sprawling and heavily contaminated industrial site.

Information on the consortium is available here.

Market Forces. Market Forces believes that the banks, superannuation funds and governments that have custody of our money should use it to protect not damage our environment.

Friends of the Earth Australia. Check here for details on other climate work by FoE groups and affiliates.

Friends of the Earth Australia is a member of Climate Action Network Australia (CANA).

To get involved in our campaigns, please check the following links: