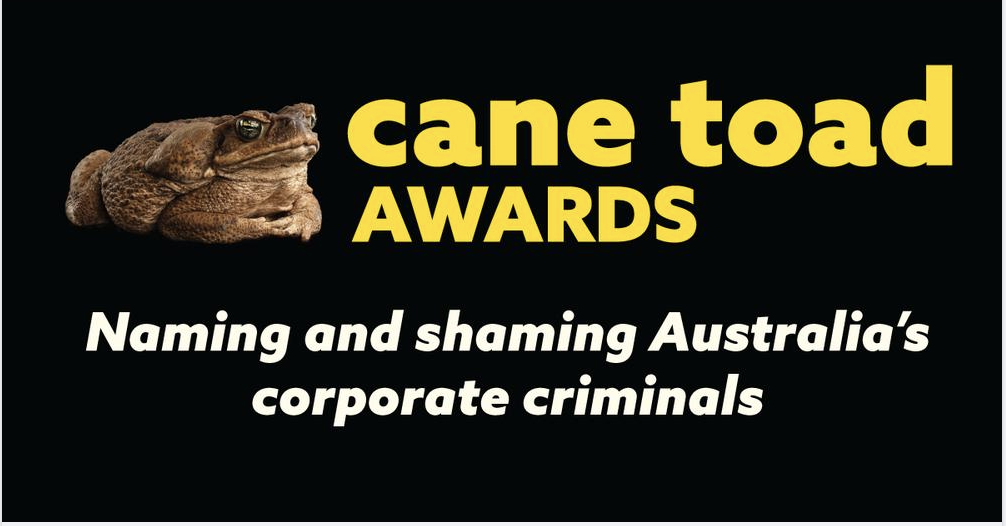 Join us as we name the Corporate Cane Toads that are causing the climate crisis and award our inaugural #CaneToadAward.

Who are the Corporate Cane Toads?

We'll be awarding our very first #CaneToadAward!  Read up on our nominees and CAST YOUR VOTE for the most toxic toad at https://canetoadaward.org/

In 1935, the toxic cane toad was artificially introduced into Australia. Backed by government and powerful companies, this damaging species was introduced to protect lucrative sugar crops from a beetle. This resulted in one of Australia’s worst environmental disasters, with cane toads destroying ecosystems and killing countless other species.

Now, many Australian corporations are implicated in violations of human rights and environmental destruction worldwide. Rainforest clearing, land grabbing, union-busting, water contamination, climate wrecking and the list goes on. Despite numerous reports and lawsuits, these corporations get away with it time and time again. They are becoming Corporate Cane Toads and should not be allowed to take over.

That’s why Friends of the Earth, ActionAid and Jubilee Resource Centre have created the CANE TOAD AWARDS. Australian corporations will be nominated for their wrongdoings, and the public will vote for the biggest toad! With your help, we will expose the worst behaviour by Australian companies and hold them accountable. We demand the Australian government introduce new binding laws to ensure companies respect human rights and the environment wherever they operate, like are being introduced in many other countries.

Vote, share, and shame these companies that are causing so much damage. The company with the most votes will be named the 2021 Corporate Cane Toad and referred to an international human rights complaint  mechanism under the Organisation for Economic Co-operation and Development rules on multinational enterprises.

We acknowledge that this event will take place on the stolen land of the Wurundjeri people, and that sovereignty has never been ceded.