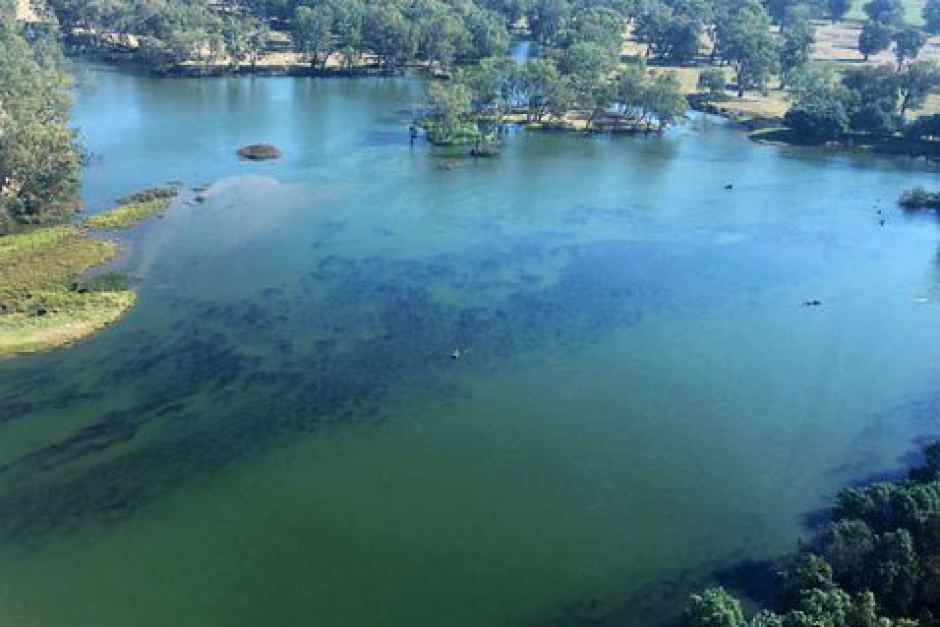 According to the US Environmental Protection Agency, there is a link between toxic blue-green algae outbreaks and climate change.

Harmful algae usually bloom during the warm summer season or when water temperatures are warmer than usual. Warmer water due to climate change might favor harmful algae in a number of ways:

Climate change might lead to more droughts, which make freshwater saltier. This can cause marine algae to invade freshwater ecosystems.

Algae need carbon dioxide to survive. Higher levels of carbon dioxide in the air and water can lead to rapid growth of algae, especially toxic blue-green algae that can float to the surface of the water.

Extreme storms followed by periods of drought can lead to more algal blooms.

In March, a ‘500 kilometre long’ plume of blue green algae was reported in the Murray River downstream of Albury (Source: Weekly Times).

“In what is already one of the nation’s worst ever recorded algae outbreaks, experts say only nature can stop the bloom’s spread, through heavy rain and colder weather”.

Agriculture, tourism and even the opening of Victoria’s duck hunting season this weekend are threatened by the spread of the toxic bloom..

The offtake and pipeline would need to be shut down if the algae reaches a certain level.

Red-alert levels remain from above Lake Hume at Tallangatta to Koondrook-Barham as well as many inland waterways and wetlands.

The Weekly Times is now reporting (March 23, 2016) that the Murray River’s blue-green algae outbreak could trigger a ‘blackwater disaster’.

The Times reports that it could become a ‘black nightmare’ when the 500 km-long algal bloom eventually dies off, robbing oxygen from the water. The bloom is expected to last at least until April and may be followed by a blackwater event. A 2011 blackwater event caused Murray crayfish to leave the river and a major fish kill, especially among older, large Murray cod.

A spokesman for the Commonwealth Environmental Water Holder said “very little” could be done to stop the bloom’s spread.

“The scale of the current event means that the provision of additional flows would be unlikely to significantly affect the blooms,” the spokesman said.

He said dead and decaying algae could deplete oxygen levels in the river triggering a blackwater event, which last devastated the Murray in 2011.

Looking after our rivers

When it comes to debate about the health of our rivers, an obvious problem is the over allocation of water to human uses like agriculture, and a management system that tends to treat our inland rivers like canals or drains rather than living ecosystems.

What is often missing from media reports is any possible link between climate change and particular outbreaks. But as with fire frequency, extreme weather, and drought, unless we step back and look at the trends, we will be ‘flying blind’ when it comes to responding to the changes that are already happening in places like northern Victoria.

For further information about climate change in northern Victoria, and what you can do, please check here.