Posted by Megan Williams on

Kicking off with the massive fish kills near Menindee on the Lower Darling River, 2019 exploded out of the starting blocks and hasn't slowed down. As the biggest environmental disaster to hit the country has been taking its toll, we've been on the ground working with communities on the front-lines. Our message is simple - Healthy Rivers Need Water.

Murray Cod and the River Country team in Walk This Way

Darlings for our Darling - Talent and variety Show, Menindee

Years ago, the then Barmah-Millewa Collective (now known as River Country) worked closely with Traditional Owners along the Murray to spread the work about cultural flows, making two documentaries about the importance and value of allocating water for cultural purposes.

One of these films was made with Wadi Wadi people from Swan Hill, Cain Chaplin joined us at Friends of the Earth for a screening of this documentary and discussion on the

Back on Track - Community Plan to restore the Murray Darling Basin

In collaboration with the Lifeblood alliance we have released a 7 point strategy to get the Murray Darling Basin Plan Back on track.

Horses in the Head Waters

We caught up with

Our campaign at Friends of the Earth exists thanks to the community that supports us and guides our work. Our work is made possible through the efforts of many volunteer hours and one part-time staff member. Our end of financial year tax appeal helps us to work with communities year round, near and far.

Strengthened bonds with the Lifeblood Alliance

We caught up with river warriors from across to strengthen releationships and plan strategy with the Lifeblood Alliance. strategy and lobbyingthe Basin to lobby bureaucrats in Canberra and align our campaign plans.

Two days before the election we projected some of the most shocking images from this year's fish kill onto buildings in Melbourne's CBD to show how long-term water management is failing to protect life in the Murray-Darling. 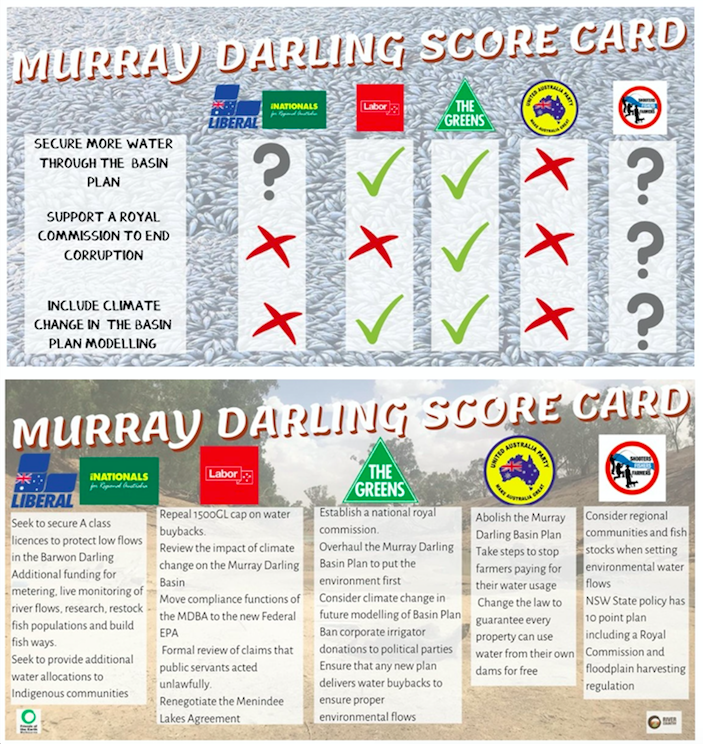 We created a score card which rated the major political parties based on their policy for the Murray Darling Basin. We circulated these on social media and took to the streets handing these out to passer-bys in the Melbourne CBD and talking to people about the importance of remembering the rivers during this year's election.

As you can see, the Liberal-National Party lack any policy directly targeting the Murray Darling Basin. They have failed to commit to securing more water through the Basin Plan and include climate change in the Plan's modelling, and do not support a Royal Commission to end corruption within the Murray-Darling Basin Authority.

With the shock re-election of the Morrison Government, the fight is far from over. Together we will win.

Campaign Coordinator Megan Williams provided an update on the happenings within the river space on Dirt Radio.

Where The Bloody Hell Are You?

Extraordinary numbers of the iconic Murray Cod, endangered silver perch and Barkandji totem the boney bream died on the Darling this year. The disastrous images and videos of the mass fish kills had the rest of the country in shock. Somehow, the gravity of this disaster was lost on the leader of this country, as he is yet to pay these communities a visit.

The community is being forced to live in terrible conditions. How can the Prime Minister of this country leave communities to drink and bathe in water contaminated with blue-green algae? There are known links between algae exposure and motor neurone disease. In 1991, a blue-green algae outbreak along the Darling was declared a state of emergency. But the only thing we have heard from the Coalition Government is the false assertion that drought is solely to blame.

We will continue to put pressure on ScoMo to visit, so the community can show him exactly what has caused this disaster and tell him how to fix it. You can ask him yourself here.

Campaign Coordinator Megan Williams was one of the speakers at an information night about the Murray-Darling hosted by Green Left Weekly and Socialist Alternative Melbourne. Megan spoke about flaws in the Murray Darling Basin Plan, shared stories from locals affected by the crisis and talked about our campaign here at Friends at the Earth and the type of work we do. Muruwari and Budjiti artist and activist Bruce Shillingsworth joined us via video link. He talked about the cultural significance of the land and river systems, shared his own story and informed us about an upcoming Corroboree Project that will be taking place this year.

We asked community members from across the country to write out their own personalised messages to ScoMo on our dead fish cards, expressing their concerns about the river crisis.

You can send him your own here! 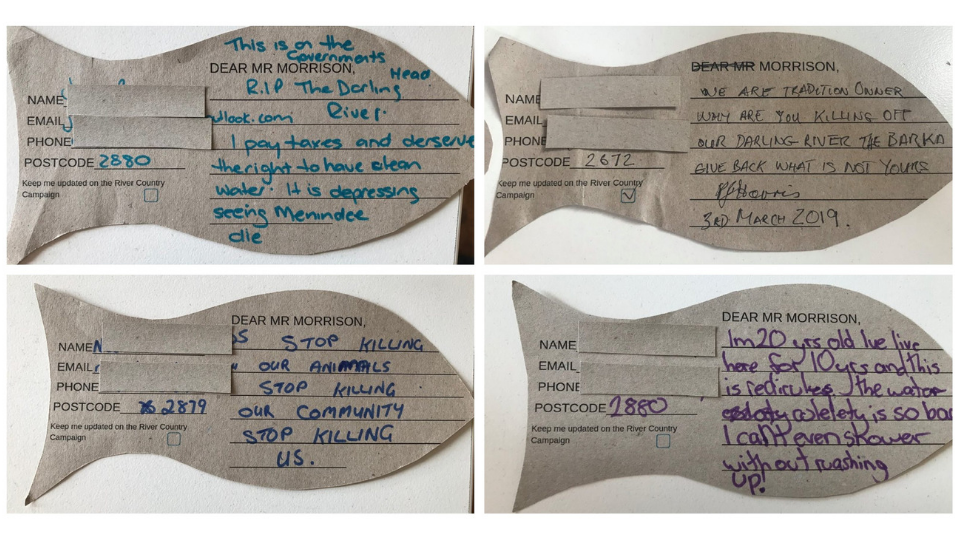 We welcomed the opportunity to provide a submission to the Draft North and Murray Water Resource Plan. Our eleven recommendations were categorised into six points: 1. Consultation, 2. Environmental values, 3. Cultural values, 4. Land use planning, 5. Regulation and compliance, 6. Interstate cooperation and action.

On International Women's Day we remembered the women who have spent their lives fighting, such as Ngiyaampaa Elder Aunty Beryl Carmichael Yungha-Dhu.

When The River Runs Dry Rally

When the Murray-Darling Basin Agreement passed with bipartisan support in 2012, it was credited as the greatest environmental policy in Australia's history. The agreement was supposed to restore the health of the Murray-Darling river system by returning water to the rivers, allowing them to flow. For this to be achieved, we must prioritise methods that deliver real water to our rivers.

Direct purchase of water licenses is the most effective use of public funds to restore water for the river. We need mechanisms in place to deliver real water back to floodplains, lakes and wetlands should Sustainable Diversion Limit (SDL) supply measure projects fail to produce environmental outcomes.

The cap on water buybacks is a restriction on rapidly and effectively returning real water to the rivers, which all communities depend on.

Our first info night for the year kicked off with a screening of "Pumped", ABC Four Corner's investigation into the government's misuse of tax-payer funds and water resources along the Murray-Darling. This was followed by a Q&A and campaign information on how to get involved.

Together we mourned the loss of a million native fish through our Vigil for the Baarka at the State Library of Victoria. We were joined by Uncle Dave Wandin of Wurundjeri, Uncle Badger Bates of Barkindji via audio recording and Rob McBride, grazier from the Baarka. Huge thanks to Amos Roach who was on guitar and didgeridoo.

We spoke to Kate McBride from Tolarno Station about the devastating fish kills and what's been happening.

Listen to the podcast here: https://player.fm/series/dirt-radio-2421335/when-the-river-runs-dry-K06qnEOqiKCs1pZO

It was hard to miss, and environmental catastrphe of biblical proportations. Millions of Fish